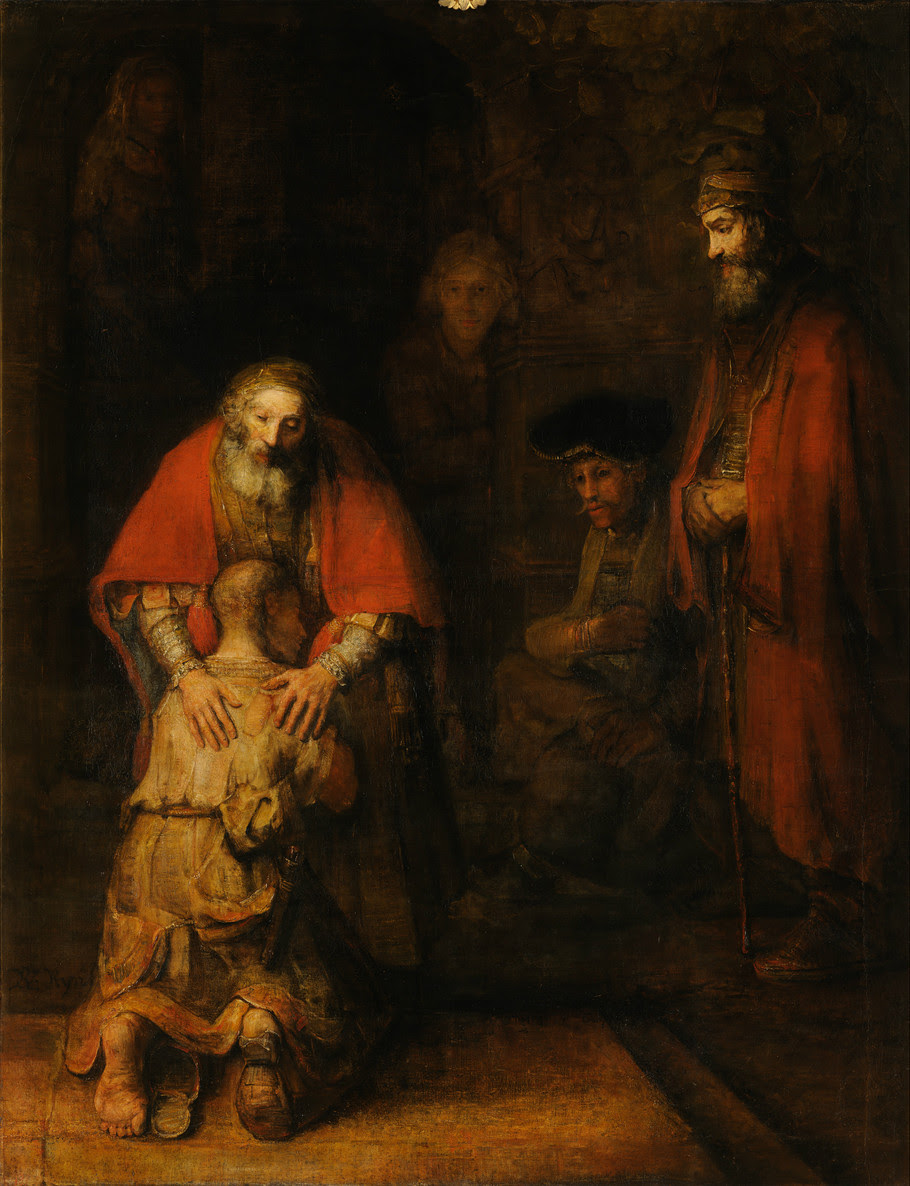 "I have reason to believe we all will be received in Graceland."
Paul Simon

I recently wrote a blog (here) advocating the doctrine of universal reconciliation. I knew there would be plenty of challenging questions in response, so I wanted to take some of them and respond to them here.

(I want to add to this, so please send me a question if you've got one to add.)

Yes, God is love, but he is also just. Though he wants all people to be saved, he also desires justice.

I have a few things to say in response to this.

First, universal reconciliation doesn't remove justice from the picture. Was justice not served when the prodigal son ended up fighting with pigs over food after demanding his inheritance and abandoning his father? In the same way, justice will be served when those who have chosen Hell on earth will get what they wanted. God's wrath is letting them have it (click here for a more thorough explanation of this view of God's wrath).

Secondly, what happened when the prodigal son returned?
In that day, it would have been the custom to make the son sit outside the home for days to prove that he was genuine in returning home. But when the son in the story returned, was the father so concerned with justice that he made him do this? Or did he run out to him (in that time, N. T. Wright provides, running was thought to be "undignified")(1) and embrace him? Did the father stop his son and ask him all kinds of questions to see if he was worthy of returning?

The son had a whole speech planned, and in it he was merely going to ask the father if he could become a slave in his house. The father wouldn't have it. He was just so happy that his son was returning.
Does this seem like a father that is super concerned about justice when it comes to his children?
Many say universal reconciliation is too human, but in this case, even the son himself was only expecting to be made a slave! In this case, the human version of justice wasn't good enough for God!

Finally, Jesus is a testament to the fact that [human perception of] justice is not God's main concern. He says something very interesting in John 12: "If anyone hears my words but does not keep them, I do not judge that person. For I did not come to judge the world, but to save the world" (v.47; also see Jn. 3:17). He then adds, "The one who rejects me and does not receive my words has a judge" (v.48). He is implicating God the Father here (see vv.49-50). However, elsewhere Jesus tells us that "the Father judges no one, but has entrusted all judgment to the Son" (Jn. 5:22). So, the Father is not the judge, but hands judgment over to the Son, and the Son does not come to judge the world but to save it! Yes, there is judgment. Yes, there is justice. But "mercy triumphs over judgment" (Jas. 2;13). Ultimately, God's purpose is to save the world and not condemn it forever and ever, so Jesus will have mercy on those who reject him in this life. Timothy Jennings says beautifully, "biblical justice is delivering the oppressed, not punishing the oppressor!"(2)

(I elaborate more on this topic in another blog, here)


Can't "all people" simply refer to all races, cultures, and groups rather than literally every single person who ever lived?

In some cases, you can look at it that way, like when it says "all nations" or "all the ends of the earth." However, it is not more valid to interpret it this way. For other verses, I don't think you can avoid it by saying that it refers to all kinds of people. For example, when Psalm 65:2 says all people will come to God, the Hebrew words there don't mean, literally, "all flesh," same as 145:21.

If the Greek and Hebrew words for "forever" don't actually mean forever, wouldn't that also mean that God's love doesn't have to go on forever, since the same words are used to describe God?

I get this one a lot. It's a good point, but it stops short of disproving universal reconciliation because of two things:

1) I didn't say the Greek and Hebrew words for eternal can't mean forever. The reason these words don't have to mean forever is because they don't refer to an actual duration of time, because the biblical writers didn't think about forever and ever. They thought in generations and ages. Hell and God are similar in the sense that they are both beyond ages and generations, and their ends are not in sight to humans. When it says God's steadfast love goes on "forever and ever," it's really saying that it goes on and on and the end of God's love is not in sight.

I know what you're thinking. Wouldn't that mean that God's love can end?
No, and this leads to my second point:

Consider this illustration: the sun is huge.  Its circumference is 2.715 million miles long. We use words like enormous, gigantic, and humungous to describe how big the sun is, because it's so big we can't actually conceive of how big it is. The universe is also  enormous, gigantic, humungous. It goes on for billions upon billions of light years. 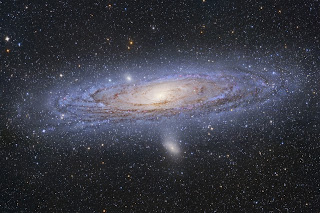 While the sun is enormous, it does have an end. The universe doesn't (well...maybe it does, but I'm not going to get into that; you get the point). Likewise, how long God lasts and how long Hell lasts can both be said to be olam or aion, it can also be that God can last forever while Hell ends at some point, because the words used to describe them doesn't actually specify a duration, just like the word humungous doesn't specify an actual size.

I should also add that this problem with these Greek and Hebrew words still comes up no matter what you believe about Hell. The Hebrew word olam (which is "supposed" to mean forever) is used by Jonah to describe how long he was in the belly of the fish (2:5-6). If it can be used to describe a period of 3 days, this word clearly doesn't have to mean forever.

If Hell is not forever, wouldn't that demean the atonement?

Maybe it would, if the only reason Christ died on the Cross was to save people from an everlasting Hell. But I don't believe this was the only reason, nor do I believe that this is the central reason.

Christ died on the Cross so that God could be in an intimate relationship with his creation. Throughout the Old Testament, God is trying everything he can to be in relationship with his people. All of human history is God in search of man. Jesus is a continuation of that story. The Cross is the greatest point in human history where we can see God in search of man, and I believe that story will continue even after death.

The atonement is many things. Let's not make it just about saving humanity from a never-ending Hell. It's so much more than just that.

I should also add that the doctrine of universal reconciliation doesn't take any of the horror out of Hell. One of the reasons for the atonement was still to save people from the horrible place in which they would experience all the consequences of their own sinful choices. It's not like Hell is any less terrible because it doesn't last forever and ever.

Consider this illustration: let's say all of humanity signed up to get addicted to cocaine at a certain point (it's a silly example, but sin is also silly). When God saw this, he sent Jesus to give them a way to avoid this doom. Some didn't accept his invitation, so they still headed to cocaine addiction. Sure, there's always rehab, but forcing oneself to submit to rehab while addicted to cocaine is incredibly hard, and the process of rehab isn't any easier. It doesn't take a Christian to tell someone to avoid cocaine. Why do most people avoid it? because they know that, though it promises euphoria, it leads to a terrible experience of which it takes what feels like a lifetime (here would be a good place for the word aionios) to break free.

Hell, like a cocaine addiction, is an awful fate no matter how long it is. Thank God he gave us a way out!

Isn't universal reconciliation an altered form of Calvinism's irresistible grace? Wouldn't the idea that God will eventually win all people over contradict free will?

I have a few things to say in response.

I will use an example to illustrate my point: let's say I find out that my friend Matt hates me. I can choose to ignore that fact and go on living my life forgetting that I love his friendship. But I do love his friendship, so instead I pursue him and am absolutely determined to find reconciliation. If I finally get to the point where Matt chooses to be my friend again, it wouldn't be because I overrode his free will, but because I pursued him long enough. In the same way, whenever God finally reconciles all people to himself, it will not be because he obliterated their free will with his love, but because he pursued them long enough.

Three, what I stress in universal reconciliation is not that everyone is going to be saved, but that God is never going to stop pursuing people. I stress this because I have no idea when everyone is going to be saved, and if it weren't for Scripture, I wouldn't believe it. It is because Scripture tells of a day when all people, all flesh, everyone will come alive and worship God that I believe that some day God will succeed in drawing all people to himself.


Have a question to add? Send it to me!