"I am not a universalist because there are some people that I don't want to see again. But God may be."
Jurgen Moltmann Which Universe Do I Live in?

I don't believe that all roads lead to God, or that it doesn't matter how people live in this life because they will all be in Heaven when they die. Nor do I deny the existence of Hell.

I believe in Universal Reconciliation, which states that as long as there is a Hell, God will be trying to reconcile all of its inhabitants back to himself. In this, Jesus is the one way to salvation, but eventually everyone will choose to say Yes to him.

Is Universalism in Scripture?

Any Bible-believing Christian must at least recognize that Universalism is something God wants.

1 Timothy 2:4 says that God "wants all people to be saved and to come to a knowledge of the truth."

We are told in 2 Peter 3:9 that God "is patient with [us], not wanting anyone to perish, but everyone to come to repentance."

Similarly, in Ezekiel 33:11, God says, "I take no pleasure in the death of the wicked, but rather that they turn from their ways and live." So, at the very least, Unversalism sounds just as wonderful to God as it does (or should) to us.

But can we go further than that and say that all people will actually be saved?

The Psalmist of Psalm 65:2 says to God, "to you all people will come."

Psalm 86:9 says, "All nations whom you have made shall come and worship before you, O Lord, and they shall glorify your name."

Isaiah 2:2 says that "all nations will stream" to "the mountain of the LORD's temple."

Jesus says in John 12:32 that "when I am lifted up from the earth, I will draw all people to myself."

He tells us in Philippians that, "at the name of Jesus every knee will bow, in heaven and on earth and under the earth, and every tongue acknowledge that Jesus Christ is Lord" (2:10-11).

The writer of Hebrews quotes what God revealed to the prophet Jeremiah, that "No longer will they teach their neighbor, or say to one another, ‘Know the Lord,’ because they will all know me, from the least of them to the greatest" (8:11).

So it appears there are actually several places throughout Scripture that support Universalism. How then do we reconcile these verses with verses that talk about Hell?

The Greek and Hebrew words that are translated 'forever' or 'eternal' or 'everlasting' do not actually fit the description of these English words. The Hebrew word olam and the Greek words aion and aionios do not have specific durations. They do not mean "absolutely unending."

They denote time-independence, describing an age that is not bound by time and cannot be measured. It cannot be measured because the end is not known or in sight. These words mean "until the vanishing point" or "beyond the horizon."

The punishment one experiences in Hell is described in Scripture as something that is perpetual, ongoing. However, its actual duration is unknown. Thus, it does not have to be taken to mean forever.

And why should we limit God to that one thing? Why limit God to "All unrepentant sinners will go to Hell when they die and will be there forever and ever"? Does this not make us like Jonah, who, after he prophesied to the Ninevites, sat and waited for God to destroy them? He limited God to that one option. But God, when he "saw what they did and how they turned from their evil ways, he relented and did not bring on them the destruction he had threatened" (Jon. 3:10).

Forever is a long time. Why decide for God that billions of years from now he is still going to be in Heaven thinking, "Yah, they still deserve it. I'll let them continue to suffer"? Why not let God decide how long Hell is going to last? This is what the biblical writers did. The words they used implied that people would be punished but they left the end of that punishment up to God.

The parable of the Lost Sheep is one of the most powerful explanations of the Father's heart that we have in Scripture. Every time I read it, I see something new and experience a little piece of the Father's love in the most magnificent way.

But before we go there, let's look at some other parts of Scripture that tell us about the character of God.

Psalm 30:5 tells us that God's "anger lasts only a moment, but his favor lasts a lifetime."

Similarly, in Lamentations 3:22 we are told that "the steadfast love of the LORD never ceases; his mercies never come to an end."


A few verses later, we are told that "no one is cast off by the Lord forever. Though he brings grief, he will show compassion, so great is his unfailing love" (vv.31-32).

This is similar to what James says, that "mercy triumphs over judgment" (2:13).

Simarly, James tells us that "there is no variation or shifting shadow" in the Father of Lights (1:17).

So, now let us return to the parable. 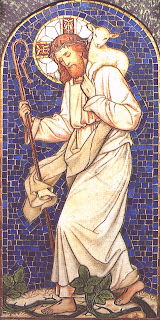 Let us put these pieces together.
God is love. God's love never fails. (The Greek words that are used to describe punishment after death do not have to mean forever, but the Greek and Hebrew words for never are quite clear.) Though his anger comes, though he brings grief, mercy triumphs over judgment. He will show compassion because his love is unfailing.

This is the way God is. He does not change. Though we are inconsistent, God remains the same.

What about after people die? Does God stop being the God who leaves the 99 to rescue the 1? Does his love cease? Does he stop trying?

In the Old Testament, God struggles with his people. He often threatens destruction and brings punishment, but he always ends up bringing restoration and promising ultimate reconciliation and victory. This is because, as Abraham Joshua Heschel says, "God does not delight in unleashing anger"(1) but, rather, his anger is used "to bring about repentance; its purpose and consummation is its own disappearance."(2) Ultimately, he pours out his love on his people; "It is a love that transcends the most intense anger, a love that abides in full recognition of human weakness."(3)

In the New Testament, this is beautifully revealed through Jesus, who tells us that God is not indifferent to sinners, but searches for them until he finds them. He runs to them when he sees them and embraces them as much as he can, knowing that when they sin and run away "they know not what they do" (Lk. 23:34).

Will this change once they die? Or will God keep seeking sinners even after they have chosen Hell?

Heschel said that, "All of human history as described in the Bible may be summarized in one phrase: God is in search of man."(4) I don't think this is a search that will ever end until God finds all of his creations and can embrace all of them.

So how do we reconcile the Universalist parts of Scripture with the Hell parts? We can affirm both. Yes, people will go to Hell if they choose it with their lives now (click here to see my blog about the nature of Hell for more explanation).

But, eventually, it will be that all people will come to God, all people will worship and glorify and bless his name, all nations will stream to his temple and experience salvation, all people will be drawn to Christ, all will be made alive in Christ, every knee will bow and every tongue will confess that Jesus is Lord, and everyone will know him.

Yes, I think God is a Universalist.