Reflections on the Beatitudes 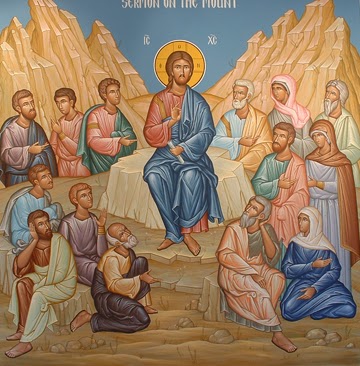 Blessed are the poor in spirit, for they shall inherit the kingdom of heaven.

We learn from the world that kingdoms belong to people of power, to kings with prestige, military victories, and considerable wealth. These people of power by their very nature could never be described as 'poor in spirit', for their spirit inspires the amassment of capital and control.

The kingdom of heaven subverts all such concepts of kingdoms and those who inherit them. The kingdom of heaven is occupied by the lowly who live dependent on the abundance of God and who share that abundance with others. These people are not interested in self-promotion, money or dominance. They are not concerned with scarcity, with "needing" to get more because of a fear of not having enough; they are concerned with the well-being of the community. It is in such people that the spirit of Jesus rests.

Blessed are those who mourn, for they shall be comforted.

I love what Brueggemann says about Jesus and mourning: "Suffering made audible and visible produces hope, articulated grief is the gate of newness, and the history of Jesus is the history of entering into the pain and giving it voice."

Blessed are the meek, for they shall inherit the earth.

The earth does not belong to those who conquer it. God has granted the earth to those who will receive it as his gift of abundance. The conquest of the earth by the powerful is widescale robbery. God was against Pharaoh because he believed, "The Nile belongs to me; I made it for myself" (Ezek. 29:3). Those who claim the parts of the earth for themselves are committing an injustice.

Blessed are those who hunger and thirst for righteousness, for they shall be filled.

We all know that many of the things which offer us the world leave us dissatisfied. Be it sex, alcohol, drugs, relationships, food, work, or whatever, we are often plagued by an intense desire for something, thinking that by obtaining it we will be filled. And no matter how often we discover that it just leaves us in the nihilism of disappointment, we always go running back. We don't let dissatisfaction and disappointment lead us to disillusionment.

Blessed are the merciful, for they shall be shown mercy.

It should be noted that mercy cannot be mercy if it is done with self-interest; that is, if it is done with the thought of the mercy one is to receive for being merciful. When one shows mercy for the purpose of self-aggrandizement, one is not being a poor in spirit, meek, pure in heart, seeker of righteousness. As Jesus says later in his sermon, giving to the needy will only be rewarded if it is not done in a self-serving manner (6:2-4).

God rewards disinterested righteousness. Only by disregarding rewards will one receive a reward for one's right-doing.

Blessed are the pure in heart, for they shall see God.

In 1 Peter, we learn that purifying ourselves happens through loving others (1:22). The opposite of indulging in our sinful desires, Paul tells us, is serving others in love (Gal 5:13). John was following Jesus' teaching on being pure in heart when he said that "everyone who loves has been born of God and knows God. Whoever does not love does not know God, because God is love" (1 Jn 4:7-8). The pure in heart, those who love others, will see God, because God is love.

Blessed are the peacemakers, for they shall be called sons of God.

Jesus is called the son of God. And Jesus came as the peaceful champion of God's kingdom. He embodied peace and taught peace and gave his life for the sake of peace. The Cross is not only the establishment of shalom, it is the call to the world to embrace God's reality of shalom.

Blessed are those who reject violence, who reject the way the world deals with things. Blessed are those who embody and teach peace, who embrace the peace of Jesus. Through their actions of peace, the kingdom of God penetrates our world, and shines through in the midst of violence. Those who introduce the kingdom of God through actions of peace are truly the children of God.

Blessed are those who are persecuted for the sake of righteousness, for theirs is the kingdom of heaven.

Not only do many Christians today have a martyr complex and act like they're being persecuted when they're not, but their responses to persecution are wholly unChrist-like. They fight. They demand their rights. Their rights become more important than anything or anyone else. When Jesus talks about persecution for the sake of righteousness, he is not talking about fighting for one's rights when one feels they are being infringed, he is talking about standing up for others whose humanity is being infringed.

Blessed are those who give a voice to the voiceless, who look out for those being overlooked, who help those being trampled on. The actual persecution of such people by those who rely on alienation and exploitation is the persecution Jesus is referring to.

Blessed are those who sacrifice their rights for the sake of others and in return receive persecution, for they will find their true rights in the kingdom of heaven.
Posted by John Daniel Holloway at 11:23 AM