Book Review: "Joshua and the Rhetoric of Violence" by Lori Rowlett 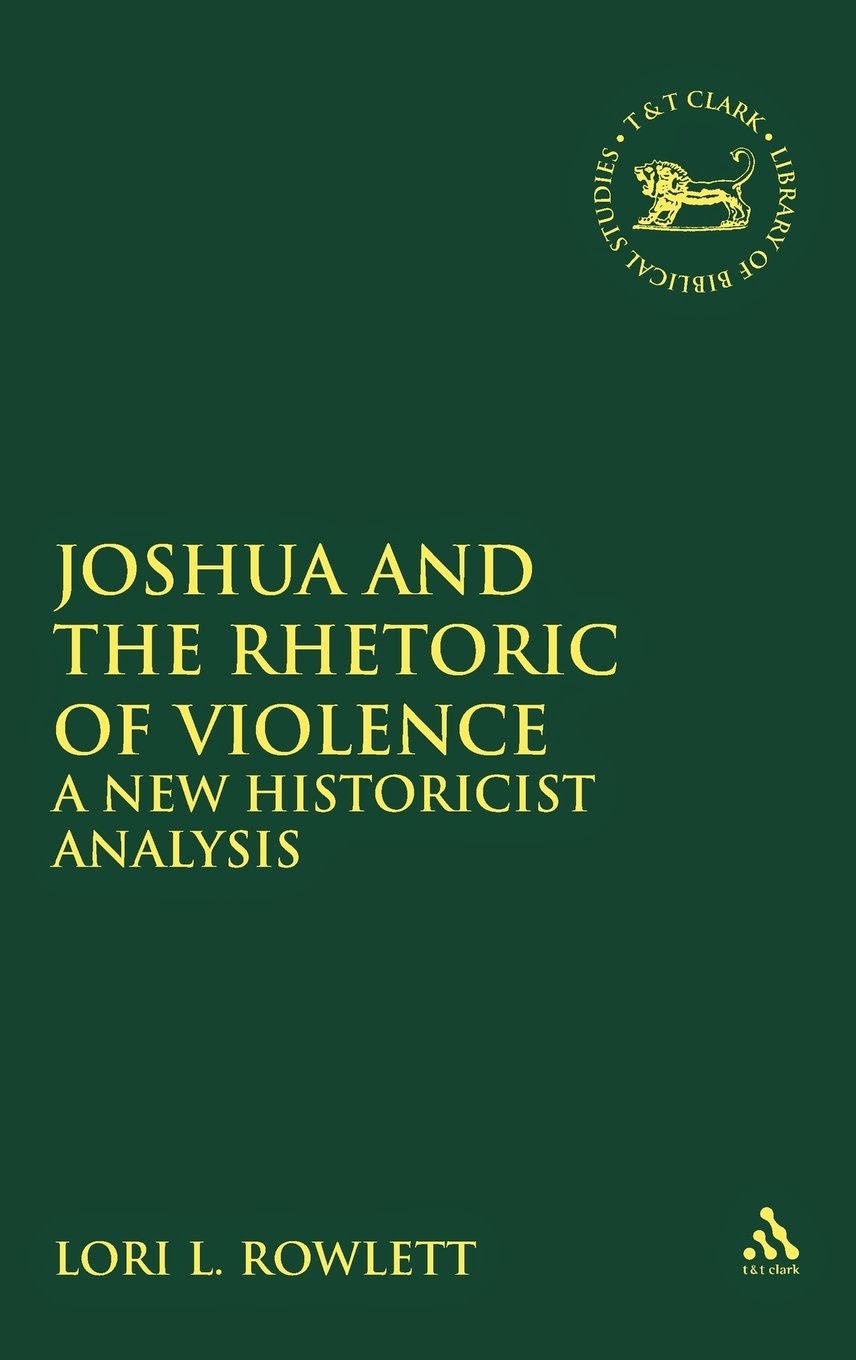 In this work, Lori Rowlett set out to deconstruct the Joshua literature from a new historicist perspective; that is, by assessing the historical context in which the text was conceived. Rowlett goes along with the widely accepted theory that the Deuteronomic History (Joshua-Kings) was formed largely in the era of King Josiah's reign. With this, she says "the DH was written as propaganda for Josiah's reform."(1) The propaganda found in the book of Joshua, she says, uses a rhetoric of violence "to serve as a warning to the people of Josiah's kingdom that the post-imperial power of the central government could and would be unleashed upon any who resisted its assertion of control."(2) In this, Josiah was "adopting the violent ideology of [Israel's] oppressors. The same ideology that had undermined their identity was now being used to exert their identity. The rhetoric of violence appropriated from the oppressor is turned by the oppressed into a vehicle of self-reconstitution."(3)

This understanding of Joshua runs contrary to the reading posed by Walter Brueggemann and Norman Gottwald. Brueggemann says, "Following the general analysis of Gottwald, the city-states [like Canaan] are to be understood as monopolies of socioeconomic, political power that are managed in hierarchal and oppressive ways."(4) Furthermore, early Israel was "an antimonarchic, peasant movement hostile to every concentration, surplus, and monopoly."(5) So then, in Joshua, "Yahweh is allied with the marginalized, oppressed peasants against the monopoly of the city-state."(6)


utilizes a common transmission code observable in numerous ancient Near Eastern conquest accounts, employing the same ideology. Since the ideology which lies behind the text of Joshua is one like that underlying other ancient Near Eastern conquest accounts--namely, imperalistic--, then 'egalitarian, peasant' Israel is employing a transmission code (a 'communicative mode') which is self-contradictory.(7)

Furthermore, it seems to me that Rowlett's approach to Joshua/King Josiah is unnecessarily negative. Yes, an ideology of 'otherness' permeates the book of Joshua, but it seems to me that her assertion that the book utilizes a rhetoric of violence to keep King Josiah's people in check goes beyond what the data provides. The small kingdom of Judah does not strike one as an oppressive imperial system, especially given Israel's reputation for being "always in the shadow of the empire."(8)


Josiah sponsored the writing of the first draft of the history in order to support his religious and political reforms that focused mainly on purifying worship and limiting the cult to the Jerusalem temple. The story came into its final form while Israel was in exile in Babylon. In other words, the story of Israel's sweeping conquest of Canaan was told by people who themselves had no land and who were powerless before the great empires of their day.(9)

While Creach is more confident about the book's composition than I think is warranted, his more positive view of the book's purpose is valid. Throughout Israel's history, surrounding empires posed as threats to their existence. Israel was always a vulnerable people, even in their periods of autonomy. This small people, as Gottwald says, "had achieved something by combining forces under the aegis of their empowering deity."(10) Thus, devotion to Yahweh, the sovereign ruler of all of creation, was absolutely necessary in order for them to compete with the surrounding empires.(11) This could provide a viable reason for the texts associated with King Josiah's reign.

However, Rowlett is also negative about the theology of the book of Joshua, claiming that it has more to do with divine sanction of King Josiah than it does King Josiah's devotion to Yahweh. She says,


in the text of Joshua, the sovereign is really Yahweh. Therefore, Joshua, King Josiah's stand-in, can appear to be motivated only by loyalty and obedience to the deity, rather than by an attempt to assert his own power. This is one of the rhetorical devices employed to mystify the inequities of the social order and to advance the power of the monarchy. The rhetoric depends upon the evocation of sentiment by employing a kind of false modesty: Yahweh is really in charge. Joshua (and by extension Josiah) poses merely as Yahweh's humble servant, acting as his proxy. However, since Joshua is functioning as the deity's proxy, Joshua happens to be the most powerful of all human beings since he and only he has been chosen by Yahweh . . . as an instrument of the deity's sovereignty. Furthermore . . . the discourse of and within the text is politically self-serving and not quite as selflessly pious as it appears on the surface. The things that Joshua and King Josiah do in apparently humble servitude for Yahweh, the sovereign, happen to enhance their own power and sovereignty immeasurably.(12)

While this reading is plausible, it is not the necessary conclusion that it is presented as. It could just as well be said that the book of Joshua is an anti-imperial script designed to inspire devotion to Yahweh in order to stand up against the powers of the empire. Their 'rhetoric of violence' could have been "part of the struggle to build and defend a [subversive] communitarian society" in the midst of a world of empires.(13)

Overall, Rowlett brings some very interesting claims to the table. While I think some of her conclusions are examples of the tendency in modern biblical scholarship to choose the more negative conclusion under the mistaken impression that the negative conclusion is always right, I do think she has a lot to offer, and her claims should be weighed and measured with further study. I definitely recommend Rowlett's book to the serious student of the Hebrew Bible.

Purchase Joshua and the Rhetoric of Violence on Amazon (here)