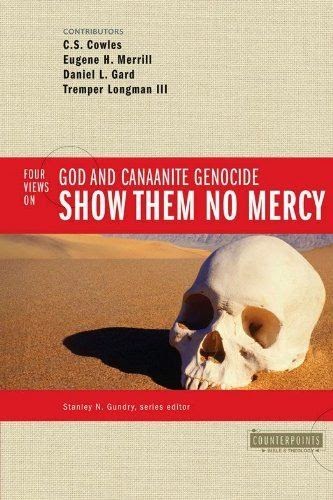 Stanley Gundry's Counterpoints in Bible & Theology series offers a lot of helpful introductions to various biblical and theological issues. Usually, the Counterpoints books are well-rounded and consist of multiple viewpoints. Given the series' reputation for providing several different viewpoints, I was disappointed and a little confused by this collection of arguments, which would be more properly titled "Two Views on God and Canaanite Genocide." There doesn't seem to be much of a difference between the approaches of Eugene Merrill, Daniel Gard, and Tremper Longman. All three are conservative scholars and, despite the curious [misleading] titles of their views (moderate discontinuity, eschatalogical continuity, and spiritual continuity), they all basically have the same understanding of how to interpret the violent material in the Bible; that is, all three affirm the infallibility (and probably also the inerrancy) of Scripture, that God did exactly as the text suggests, and that all of the violent actions attributed to him are moral and just. So then, the book consists of one liberal view (that of C.S. Cowles) against three equally conservative views. This is very odd, since there are clearly many more approaches than just these two. Roger Olson highlights nine in his article "Every Known Theistic Approach to Old Testament 'Texts of Terror'" (although, I think his use of 'every' is an overstatement).(1) One wonders if this set-up was purposeful, that Gundry wanted three conservative views against one liberal view to discourage readers from adopting the liberal view.

Since three of the views in this book are so similar, the conservative scholars' responses to each other consist of an unnecessary overview of the argument they're responding to, a pat on the back, and a struggle to find things with which to disagree. For example, in Gard's response to Merrill, one of his few critiques is that Merrill takes the 1000 years referred to Revelation literally, a point of difference which has nothing to do with God and Canaanite genocide. For this reason, one could just read Cowles' responses to the conservative approaches and skip the others.

What is also unfortunate about this book is that I doubt it will help much in the divide between Christians on this issue. The reason I say this is because the most crucial aspects of this issue were not given ample focus. I think the problem of divine violence in the Bible centers around two things: the authority of Scripture and how to interpret Revelation. Obviously, there are more factors at play, but I do think these two carry the most weight.

Most Christians will say that the Bible's violent depictions of God are at least troubling. The problem is, most Christians regard all of Scripture as infallible and as God's self-revelation. So when the Bible says God did something, there is no question, he definitely did it. Thus, it is first and foremast an issue of the authority of Scripture and how we are to read/interpret Scripture. The fact that all three conservative scholars mentioned the authority of Scripture in response to Cowles supports this understanding.

Also at the center of this issue is how we interpret Revelation. A central argument for those like Cowles who say that the violent depictions of God in the Old Testament do not reflect what he actually did or his actual nature, is that Jesus in his life and teaching presents a very different portrait of God, one who loves enemies, rejects using violence and reprimands those who use violence. At the end of the day, the only major element that complicates this understanding of Jesus is the book of Revelation, which seems to depict Jesus as the same kind of violent warrior that Yahweh is depicted as in the OT. This argument is used by all three conservative scholars in their responses to Cowles.

One can only really discuss divine violence in the Bible if one deals with how to interpret the disturbing parts of the Bible while maintaining its divine inspiration, and also by explaining how the depictions of Jesus in Revelation don't imply that he is a violent warrior. While I agreed wholeheartedly with most of what Cowles had to say, he unfortunately did not dedicate much time to addressing these core issues. He didn't discuss the authority of Scripture at all, and he limited his discussion of Revelation to a single quote from a scholar of Revelation in a footnote not even in his main contribution but in one of his responses to the others. Quite inadequate.

Overall, while I have highlighted the deficiencies of this collection of arguments, the book isn't altogether inadequate. It can still serve as a good introduction to the war material in the Bible and how we Christians should respond to it. That being said, I don't think it properly served its purpose, and I hope that a more comprehensive book that similarly focuses on the dialogue of opposing views will be put together in the future. If it does, hopefully it will represent more than two views, and hopefully it will include a much-needed discussion of the authority of Scripture and of the book of Revelation.


Purchase "Show Them No Mercy: 4 Views on God and Canaanite Genocide" on Amazon (here)