Book Review: "A History of Modern Scholarship on the Biblical Word Herem" by William Lyons 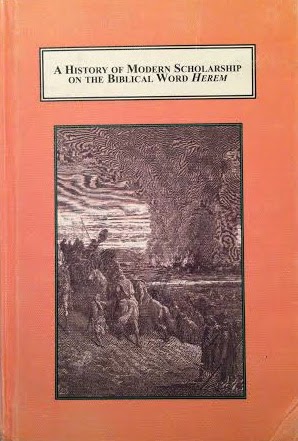 I should begin this review by stating that Dr. Lyons was a professor of mine at Regent University. I had four classes with him, and he was my favorite professor. Beyond that, he has counseled me on academic papers, as well as on the next steps of my academic career, and we have maintained a friendship since my first semester at Regent, one that continues to strengthen. He even guided my wife and I through marriage counseling and officiated our wedding. Given our relationship, it would be very easy for me to just sit here and pat him on the back with a 5-star review singing his praises. However, if you know me, you know that I can have a close relationship with people while also being openly, even harshly, critical of their views. And I think you'll find that Dr. Lyons--though his teaching was a milestone in my life and was monumental to the development of my thinking, my research and my writing as a student--is no exception to the honest scrutiny and criticism that I put into my analysis.

The purpose of Lyons' book is to provide an overview of the work of three evangelical Old Testament scholars, Walter C. Kaiser, Jr., Peter C. Craigie, and Tremper Longman, III on the issue of warfare in the OT, particularly that of herem. Their work, as well as the work of scholarly evangelicals in general, has largely gone overlooked, and so Lyons lends focus to them and their claims, as he himself is an evangelical OT scholar.

He starts the book by outlining the major claims of evangelicals, one of which is the unapologetic belief in the Bible as the infallible word of God. For example, Longman refers to "the fact that the divine Author stands behind all of Scripture" (emphasis mine).(1) Lyons also quotes Mark Noll, who said that for evangelicals, "where the Bible speaks, God speaks."(2) In this, all of Scripture is God's self-revelation, which leads Longman and other evangelicals to see the whole Bible "as a single writing that presents an internally consistent message."(3) I would like to ask him what leads him to think that the Bible has God as its author, since such a claim is not made anywhere in Scripture.

What I find problematic about the divine authorship understanding of Scripture is that by embracing it, a multitude of conclusions are automatically made about the text before dealing with the evidence. For example, when the Bible says that God told Saul, "attack the Amalekites and totally destroy everything that belongs to them. Do not spare them; put to death men and women, children and infants, cattle and sheep, camels and donkeys" (1 Sam 15:1-3), before studying, say, the other ancient near eastern cultures that claimed their wars were also divinely commanded, an evangelical will say that God did indeed command such horror, because he/she is already committed to that view of Scripture. The God revealed in Jesus Christ has to be exactly like he is described by the authors of the OT, because the Bible was written by God and offers a single, consistent theology. Thus, conclusions are made before examining the evidence (which probably has something to do with why evangelical scholarship has been overlooked).

Not only is this, to me, flawed investigation, but it also creates problems for the evangelical mind, as evidenced by the fact that Kaiser, Craigie, Longman, and Lyons all inadequately address the theological problem of divine violence. They all provide what I consider to be pat answers, as they essentially appeal to either mystery, God's wisdom and righteousness, or the evil of the victims of his violence. But what other response could they provide given their view of Scripture?

I find Longman's approach in particular to be troubling, as he seems to dehumanize the war narratives of the OT. Lyons criticizes him for not addressing the problem of divine violence in his book God is a Warrior (see my review here). Longman addressed this to Lyons by saying that the book was "an exercise in biblical theology, not ethics,"(4) as if God commanding genocide isn't a theological issue! What is troubling to me is that when he was asked by Lyons "Is herem moral?" he responded in the affirmative, because "If it is initiated and directed by God, it is moral. God defines morality."(5) If something is immoral, it shouldn't be moral just because God does it (I think of Nixon's words to David Frost: "If the president does it, it's not illegal"). Such a definition of morality makes morality completely relative, and thus meaningless. If we cannot say that something as terrible as genocide is immoral, then what can we say is immoral? Lyons would probably describe my assessment as a desire for a "kinder, gentle God." Sure, if all it takes to be a kinder, gentler God is to not kill women and children, then, yes, I do believe in a kinder, gentler God!

My favorite of the three scholars Lyons discussed is Peter Craigie, who acknowledged the unholy nature of war in the OT: "Can the ruthless requirement for the extermination of the enemy--men, women, and children--in anyway be regarded as holy? I think that it can not!"(6) Unfortunately, rather than letting this lead to questioning his expectations of Scripture, he settles for a strange dualism between God's activity and God's moral being, that essentially amounts to saying that God did and did not participate in the violence that is ascribed to him.(7) Lyons is right to critique his approach.(8)

With his book, Lyons points out what is being ignored in the OT academic community, that is, the scholarship of evangelicals. His overview is comprehensive and informative, and he includes insightful appendices and footnotes. For the evangelical studying the OT's war material, or for those interested in the overlooked sides of the topic of war in the OT, this is a great resource.