Ken Ham Makes Me Want to Be an Atheist 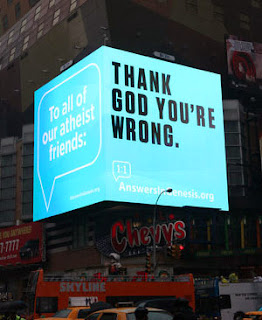 Ken Ham with Answers in Genesis recently started a billboard campaign countering atheists. This billboard campaign has to cost at least 100s of thousands of dollars to fund. This is nothing new for Ken Ham, who has spent $27 million dollars on his Creation museum, in which he is trying to build a replica of Noah's Ark.

I recently read a tweet from an atheist in response to these billboards: "To all those who believe in the Bible: Thank god it's fiction." How did Ham think atheists were going to respond? Did he really think they would look at a billboard that said, "Thank God you're wrong," and think, "Oh my gosh! I need to become a Christian! I just realized I am so wrong! Thank you, Ken Ham!"?

But what really bothers me about this pathetic attempt at evangelism, is the money involved. How many people could be helped with the money going into these billboards? "This does help," Ham would say, to which I would do what most people probably do seeing these billboards--roll my eyes.

Imagine if he dedicated 100s of thousands of dollars to helping those in poverty, feeding them, clothing them, paying rents, putting people through college. But no. He decided that arrogantly stating, "Thank God you're wrong" to a bunch of atheists would help more people--a simply idiotic notion.

People like Ken Ham bring me so much pain, because I know people that struggled with Christianity and ultimately couldn't accept it because of things like this. Indeed, if Jesus was like the Ken Hams of this world, I would walk away from Christianity as well.

But Jesus didn't do stupid stuff like this. Jesus healed the sick, provided for the poor, showed mercy and love. He embodied a mission, and people just started following him. Jesus was humble and cared about the needs of others. We need a humble, missional approach to evangelism that works itself out in providing for people's needs. That's what we need to be spending our money doing, not supporting the insane productions of navel-gazing people like Ken Ham.
Posted by John Daniel Holloway at 10:39 AM