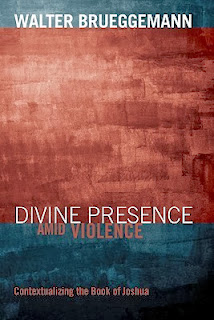 In Divine Presence Amid Violence, Walter Brueggemann tackles the question, "How could the God of the Bible mandate violence?" by talking about the nature of biblical revelation and using Joshua 11 as a case study.

Informed by Norman Gottwald's Marxist-like understanding of Israelite sociology, Brueggemann says that the city-states in Joshua 11 were "monopolies of socioeconomic, political power that [were] managed in hierarchal and oppressive ways" (15) and were propped up chiefly by their military power, their horses and chariots (Josh. 11:4), which "symbolize and embody oppression . . . [and] serve only to maintain the status quo in which some dominate others." So, he says, "Yahweh authorizes their destruction" since he is "the sworn enemy of such modes of power" (33).

Reading the book, this "contextualization" seems a little too easy. However, I think Brueggemann makes a pretty good case for this understanding of such cases of divinely sanctioned violence. That being said, I doubt it can be maintained throughout the Old Testament, for every instance of so-called 'holy war'. It also begs the question, Is violence justified if it disarms the powers of oppression? Or, better, Would Jesus condone violence if it disarmed the powers of oppression? For many, this is a simple question; but I think if we're honest enough, it isn't so easy. Brueggemann seems to think violence would be justified in such cases, as Yahweh's mandate was an "authorization for a liberating movement--which [was] sure to be violent, but only violent against weapons" (23, emphasis mine).

The question of divine violence is not the only one addressed in this little book; he also deals with the question of revelation, a topic about which he has a lot of insight. He says, "the canonical literature does not offer a settled, coherent account of reality; rather it provides the materials for ongoing disputatious interpretation" (10). The Israelites were also engaged in such disputatious interpretation, which Brueggemann says they did through memory (particularly that of the Exodus), a yearning for justice, and established leadership (27).

With this, he suggests that revelation in passages like Joshua 11 "is not self-disclosure of God," but a communal interpretation of events based on memory, yearning and leadership (35-39). Memory, because they learned from the Exodus that Yahweh is the enemy of oppressive powers; yearning, because Yahweh is the God of the liberation and justice that they so earnestly desire; and leadership, because of the chosen mediators of the presence of Yahweh, particularly Moses (see Josh. 11:12, 15, 20 and 23).

The question then becomes, Do we accept their interpretation of God's character? This is a question Brueggemann leaves open. He is not uncritical of Israel's theology, but he does provide a contextualized framework through which Joshua 11 can be studied that can make their theology seem less primitive. That this framework can be applied to all the holy war texts, as well as the other texts in which Yahweh sanctions violence, is what I doubt.

Overall, this is well worth the read. I recommend reading it before buying it to see if you want to keep it around; it's very short and can easily be read in one sitting. In fact, if one were to put it on normal-size paper, without the extra spacing between lines, it would be a long article rather than a book. I wish Brueggemann would have dedicated a more extensive work to this topic. He has the resources, and clearly doesn't mind writing (seriously, how does he write so many books?). It would have been beneficial if he had tackled several texts, instead of just the one. Nevertheless, it's a good read, and if Joshua 11 bothers you (and it should), Brueggemann can definitely help.