Tribute to My Mother: What she taught me and how it made me who I am today 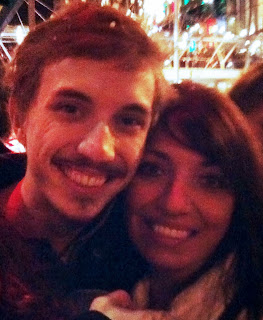 I've always been very close with my mom--very close with my entire family, actually. Because of our closeness, the struggles we had individually were almost never hidden. If my sister was depressed, we all knew; if I was depressed, they all knew. We have always been very open and intimate with each other. So, again and again I have seen my mom cry a flood of tears. Often included in these tears were harsh words directed at God. While my mom has always been a faithful Christian, time and time again I watched her lash out at God in ways only the prophet Jeremiah would understand.

I can't even count all the times I witnessed my mother wrestle with God, screaming at him, demanding answers. She wasn't just going to take it. While her speech was often unfairly directed at God, attributing things to his work that I don't think should have been attributed to him, we can see people doing this throughout Scripture and God seems able to handle it.

It wasn't until I took a prophets class in college that I realized my mother is like Jeremiah. Jeremiah stood before God in utter autonomy and demanded that he take the prophet's turmoil seriously and do something about it. My mother was the same way. She often felt completely abandoned and forgotten by God. In her utmost vulnerability, she would reach the end of herself and would no longer have any of it. You will not forget me, God! She, like Jeremiah, could not get rid of the burning fire of God within her. To quit was not an option; there was only to wrestle.

Walter Brueggemann calls complaint addressed to God a person's moment of omnipotence; denying ourselves this omnipotence, he says, produces "'false selves' who cannot be honest before God and so must 'fake it' with God." My mother took no part in this. If one is experiencing enough pain, one can no longer fake it. Perhaps it was because she experienced immense pain over and over again that she refused faking it altogether. The affect that seeing my mother's moments of omnipotence has had on me is immense and cannot be described accurately.

Because of what I saw in my mother, I was sensitive to it when I read Scripture. I saw people like Moses, David, Job, Jeremiah, and even Jesus modeling this same autonomous, omnipotent speech towards God. I was also sensitive to seeing it in God himself, who often lamented to his people, crying out, 'Why?!' I owe these observations, at least in part, to my mother, who modeled a lament-filled intimacy with God, propped up by a faith that wrestled with God.

Only recently have I realized how influential my mother has been in my intellectual and spiritual life. My entire life is a story of a boy wrestling with God. I too have no room for faking it. I will stand before God and demand before I simply take it. I do not merely accept what I am told, or the traditional orthodox answer for the questions I have. My questions will be taken seriously, and I will not be given some kind of flippant, pat answer to the burdensome questions that come up.

What I saw in my mother was a refusal to simply accept the status quo. When something is wrong, it sure as hell is wrong and she voiced that wrongness and wasn't going to be stopped. This is the very work of a prophet--giving a voice to the pain. I saw my mother throughout my life giving voice to her pain and the pain of those around her, and that has inspired me greatly. Intellectually, I refuse to accept the status quo. If there are questions, or if there is something wrong, I will voice it and I won't be stopped. Spiritually, if there is pain within me or around me, that pain will be given a voice. My mother taught me how to embrace pain, the very thing Jesus did in the incarnation. One might be able to say that at the heart of all of my views, theological, political, whatever, is the influence of my mother's fierce and intimate relationship with God. I owe so much to her.

Thank you mom.
Posted by John Daniel Holloway at 2:27 PM