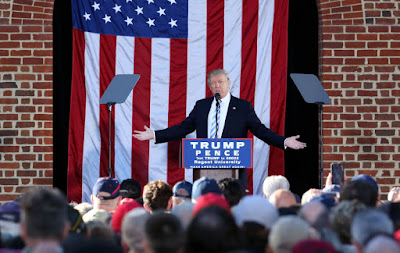 I am an alumni of the Regent University College of Arts & Sciences. I am emailing Regent's executive leadership concerning the Trump rally that was held at the university last Saturday.

I am extremely disappointed in the University for failing to raise a voice of dissent against such a man as Donald Trump. In the news article accompanying the rally, the event is said to have been from a "desire to expose Regent students to a variety of thought-leaders within the political process." I understand the logic but ultimately think it falls apart.

First of all, a campaign rally 2 weeks before an election is not an exercise in exposing students to political thought and leadership. You gave Donald Trump a platform on which he could rally for support in the home stretch of his presidential run.

Humility. Service. Compassion. Love. Self-sacrifice. These are the characteristics of Christ. Trump has clearly demonstrated that he doesn’t care about them at all. How can you possibly give a platform to such a man?

Even worse, you let vendors sell horrifying merchandise on the Regent campus--shirts that say "Trump that b*itch!", shirts that depict Trump urinating on Hillary's name, posters of targets over Hillary's face that say "Killary Rotten Clinton." That you can be a Christian university and give opportunity to this kind of hate culture is absolutely astonishing to me.

I am incredibly disappointed in my alma mater. The world is watching, and instead of raising up a prophetic Christian voice, you gave a demagogue a platform. I can only hope that there were students and faculty and staff who protested. If there weren't, then I can be sure that there was no Christian voice heard at Regent on Saturday, October 22, 2016.

Posted by John Daniel Holloway at 10:16 AM