Abortion and the Supreme Court: Why Christians Shouldn't Vote for Trump Out of Fear 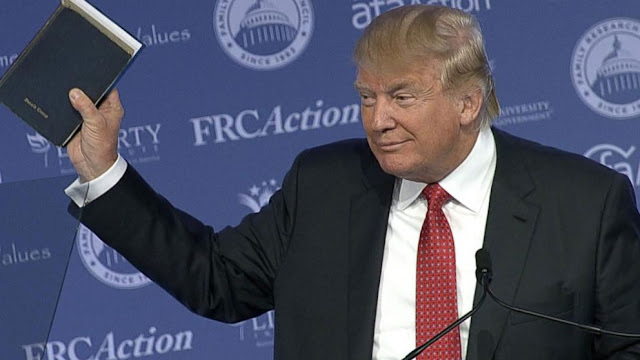 Now that Donald Trump has his Evangelical Advisory Board, he is going to do everything he can to win the Christian vote. The strategy has already been made clear: Trump will vow to put an anti-abortion judge on the Supreme Court.

The message is clear: A vote for Trump is a vote against abortion. Don't vote Trump and you risk voting for abortion.

Let me illustrate my point with an example from the Bible.

In ancient Israel, King Josiah initiated a comprehensive reform of Israelite practices after a long period of idolatry and false worship. Around this time, so the story goes, the temple law book was found. The finding of the law book gave direction to the King's reform. The goal of the reform was a re-orientation of Israelite life to be centered on God.

The prophet Jeremiah began his prophetic career during the same period. Scholars have debated what Jeremiah thought about the reform, because he does not mention it, and rarely mentions Josiah. Whatever he thought of it, it is clear that it was not enough for him.

It was not enough because Jeremiah did not formulate his opinion concerning the spiritual state of Israel merely on whether or not an official reform initiated by the king was taking place. Jeremiah would only be satisfied by a turning of the entire heart toward God, a reformation of the heart of the people of Israel.

"Circumcise yourselves to the Lord," he says, "remove the foreskin of your hearts, O people of Judah and inhabitants of Jerusalem" (4:4).

The people of Israel needed much more than a legislative reform. They had sin written on their hearts (Jer. 17:1). No law could change that. The reform they needed could only be initiated by God. They needed God to create in them new hearts with the law of God written inside (31:33).

So many Christians today want a legislative reform more than the reform of which the prophets spoke.

The root of the abortion problem is not that it is legal. We would do better to address the root issue than support a terrible presidential candidate because we think he will appoint an anti-abortion judge (which isn't even a guarantee, since he has in the past described himself as "very pro-choice").

The Greek word used for ministry means “waiting a table.” Christ is the bread of life (Jn. 6:35) and the Word of God (1:1). Ministry is the act of serving the Word of God to the world. We are to be waiters and waitresses serving the bread of life to our tables—our communities. The world will been drawn to Christ by our love (Jn. 13:35), not our laws.

Only love can save the lives affected by abortion.

"Do not put your trust in princes, in human beings, who cannot save."
Psalm 146:3
Posted by John Daniel Holloway at 11:14 AM