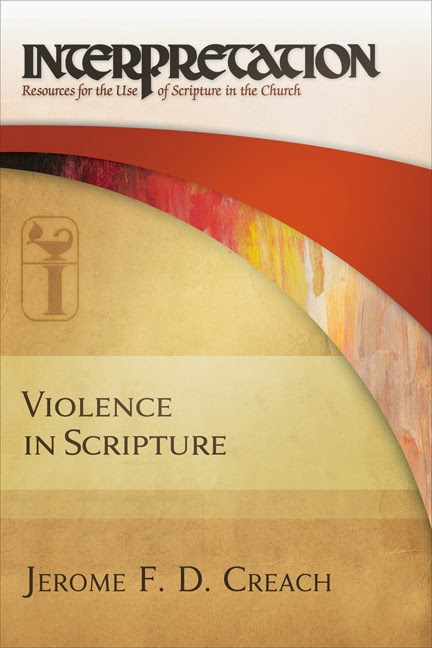 After WJK Press completed their Interpretation commentary series, dedicated to providing "Resources for the Use of Scripture in the Church," they jump-started a special themes series to go along with it. Jerome Creach's Violence in Scripture is part of that series, and after reading it I am looking forward to reading the others. Creach is a well-rounded scholar whose study is enriched by early church fathers as well as the best of modern biblical studies, which he brings together quite nicely in his treatment of violence in Scripture.

With regard to the flood story, in chapter 1 Creach posits that, given its genre, it "was not meant to be read as an historical account. . . . [So], although the story portrays God making 'an end to all flesh' (Gen 6:13), it does not intend to say that God actually made an end to all flesh."(1) He says the flood narrative "is really about God's struggle to maintain creation in the face of humanity's spread of violence. . . . [D]ivine judgment amounts to the return of the precreation state in an attempt to correct creation and reestablish the order necessary for life."(2)

He essentially says the same thing of the narrative of the plagues. He follows Terence Fretheim in saying that Pharaoh is the "anticreator" who with his violent oppression is destroying God's creation and moving it towards a state of chaos.(3) He also follows Fretheim's analysis of the plagues, which he reads "as 'signs' of creation's rebellion against the Egyptians."(4)

In chapter 2, Creach addresses the warrior theology of several Old Testament texts. He says, "the image of God as warrior . . . is closely related to the picture of God as judge and arbiter of justice."(5) Therefore, war is understood as one of the ways God establishes justice in the world. Furthermore, Creach says that by "assigning war to God, as part of God's judicial actions, war is taken out of the hands of humans as a tool at their disposal. Any use of war for selfish purposes then becomes illegitimate. If this perspective is taken seriously it makes war extremely difficult to justify."(6) But doesn't that leave it open for war to be justified at times as the necessary action against a people that are moving God's creation towards chaos and rebelling against God's justice? For such scenarios, it seems that there would be no reason to reject the use of war. Yet Creach still maintains that, "Far from empowering any human being to engage in war, [the Bible] denies humans the right to fight. The battle is left to God."(7) Lori Rowlett rightfully asks, "Why would a deity who commands pacifism for his people engage himself in the slaughter of thousands of other people?"(8)

It is when Creach talks about herem in the OT in chapters 3 and 4 that his argument starts to become pretty unique. Of the Israelite war with the Amalekites, he says,


Whatever "history" lies behind the story in 1 Samuel 15, that history is now used for a larger religious purpose. The Amalekites do not represent so much real historical foes as the forces of disorder that threaten to undo God's creation. Thus the promise to eradicate the memory of Amalek must be understood against the backdrop of order and chaos.(9)

Elsewhere he says the Amalekites are "a prototypical enemy that represent the forces of evil."(10) So, the emphasis in 1 Samuel is not on a historical people that have to be destroyed, but the spirit and way that those people represented which Yahweh will not tolerate. Creach quotes Avi Sagi who said that the "war against Amalek is waged with the book," the implication being that it was not waged with actual weapons and violence.(11) Furthermore, Sagi says, "the 'remembrance' of Amalek [that must be destroyed refers to] a memory that encourages a way of relating to and controlling others through violence."(12)

While I certainly see the value of this interpretation--and I think this is the message that should be drawn from the story--I don't think it can reflect the actual purpose of the text, nor do I think it properly addresses the theological problem--that is, that Yahweh is the kind of God that commands the death of "women, children and infants, cattle and sheep, camels and donkeys" (1 Sam. 15:3). Creach resurrects the allegorical approach of early church fathers like Origen in a sophisticated and well-informed manner. Unfortunately, it still comes off as a weak way of dealing with the issue.

He does the same sort of thing with the account of Canaanite genocide in Joshua.


The story of placing the people of the land under the ban seems to have served [Josiah's] reform movement largely as an emblem of purification, but was not meant to be taken literally.(13)

Josiah was not dealing with Canaanites in the land, but with his own people, who often practiced the worship of their God with elements of the worship of Baal and other deities (2 Kgs. 23).(14)

"Canaanite" in Judges is a code word for the kind of society that works against God's intentions for shalom. Thus the charge for the Israelites to drive the Canaanites out of the land is really a charge to establish justice and to reject the death-producing society the Canaanites represent.(15)

This reading is more plausible than his reading of the Amalekite story, but it still falls short in my mind. Though he's right when he says that the purpose of the story was to support Josiah's reform and not necessarily to record actual historical events, the text still reflects an ideology of war and a theology of a divine warrior.(16) Gerhard von Rad denied historical reality to the so-called "holy war" narratives, but he still maintained that something like holy war went on in ancient Israel.(17)

I think the messages Creach draws from these narratives should be embraced, but only alongside of an acknowledgement of the incomplete theology within them. I think it is still necessary to reject certain elements of the text's theology, but Creach is reluctant to do so. He speaks of those who "separate the presentation of God as a warrior in the text from the real God . . . [understanding] the text as a flawed work, a relic of the past that naturally presents God in ways that are imprecise and culturally conditioned." Of such people, he says that "the complete separation of the real God from the textually embodied God seems misguided. Such an approach also overlooks the potentially positive role [the image of God as warrior] plays in Scripture and in Christian theology."(18)

This is somewhat of a straw man. Fretheim distinguishes between the "textual God" and the "actual God,"(19) but he doesn't then say that the image of God as warrior never plays a positive role in Scripture or theology. There is nothing wrong with imaging God as a warrior, as long as we say he is a warrior "against the rulers, against the authorities, against the powers of this dark world and against the spiritual forces of evil in the heavenly realms," and not against flesh and blood (Eph. 6:12). Indeed, I follow Greg Boyd's "warfare worldview" in which Christ is always working as a warrior against evil,(20) but that doesn't mean I embrace all the images of God as a warrior in the Bible, particularly those which depict God as violent.

Creach's reluctance to reject certain OT theologies is made clearer when he talks about Jesus and the New Testament in chapter 7. He says, "Jesus did not offer a corrective to Old Testament ideas . . . , it is most accurate to say that Jesus presents for Christians a normative interpretation of the Old Testament, not a repudiation of it."(21) However, he seems to contradict himself on this point. He has a great discussion in chapter 6 about the relationship between 2 Kings 1:9-12, in which Elijah calls down fire from heaven upon his enemies, and Luke 9:51-55, in which Jesus rebuked his disciples for suggesting that they call to God to send fire to consume the Samaritans. He says that Jesus' message in Luke 9 is unambiguous: "Jesus seems clearly to repudiate Elijah's actions" (emphasis mine).(22) But 2 Kings 1 does not merely describe Elijah's actions, it describes God's actions as well. So for Creach to make this claim, he has to admit that Jesus is calling for his disciples to reject a certain OT theology. Creach instead claims at the end of the book that the OT does not contain "instructions and stories that have values that Jesus then rejected."(23) These are conflicting claims.

I wish I had space to cover some of the other topics Creach covers in the book. For example, he includes a phenomenal discussion of hell in chapter 6. In a well-rounded and nuanced manner, he makes the case that the Bible leaves the door open to the possibility that hell is not forever, and that Jesus will seek the reconciliation of its inhabitants after death. His presentation is not only compelling but also much-needed.

Overall, this is an incredibly informative book for a Christian studying violence in the Bible, particularly the OT. While the title is "Violence in Scripture," I was disappointed to find that it includes very little discussion of violence in the NT. Notwithstanding, I definitely recommend the book to those interested in the topic. It is a good resource for all readers--student, pastor, scholar, whatever--and its insights go beyond the topic of violence, as Creach supplies important and illuminating discussions of a number of biblical topics, accompanied by a fantastic bibliography.