Bane and Hell: Tortured with Hope 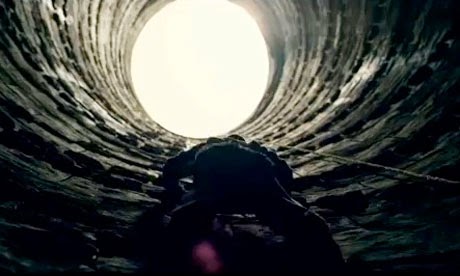 “But my people did not listen to my voice,
And Israel did not obey me.
So I gave them over to the stubbornness of their hearts,
To walk in their own devices."
- Psalm 81:12

The Power of Choice

There is something horrible that happens to humans when they become so full of sin that they reject God completely and insist on going their own way--God lets them go. I am speaking of Hell.

With our beliefs and actions, we either say 'Yes' to God or we reject him. Or to speak eschatalogically, we either choose Heaven or Hell. As Oscar Wilde's Dorian said, "Each of us has heaven and hell in him."
One cannot go to Heaven if he has rejected God.

No matter how much God wants everyone to go to Heaven (Ez. 33:11; 18:31-32; Matt. 18:14; Tim 2:4; 2 Pet. 3:4), if people reject God and choose Hell then that is their decision and God cannot override that. He cannot violate someone's free will by bringing them up to Heaven when they have chosen Hell with their thoughts and actions.

As Rob Bell wrote in Love Wins, "God gives us what we want, and if that's hell, we can have it. We have that kind of freedom, that kind of choice. . . . We can have all the hell we want."(1)

And as C. S. Lewis wrote in The Great Divorce, "All that are in Hell, choose it. Without that self-choice there could be no Hell."(2)

Requiem for a Dream is a movie about people who get addicted to drugs and, as a result, their lives spiral into shocking, tragic hells of horror and despair. The Lost Weekend is a movie about a guy who is addicted to alcohol and this addiction ruins every part of his life and leaves him in a hell where there is no comfort, only sadness and even terror. Shame is a movie about a guy who hates himself so much because of an addiction to sex. He finds himself in a hell where "sex is his cross to bear"(3) because he finds no pleasure in it, but always feels the need for it.

"People choose to live in their own hells all the time," says Bell.(4) I think Hell will look like this. As Martin Luther said, "sin is the punishment of sin."(5)

About a week ago, I went to watch my fiancee perform in the play Eurydice. In it, the main character, Eurydice, dies and goes to "the Underworld"--Hades (the play is a modernization of a Greek myth). At one point it is referred to as Hell but that's not an accurate title given what our culture understands Hell to be.
Anyway, the "Lord of the Underworld" said something I found very interesting. He said, "We make it real nice here, so people want to stick around."

Though the Underworld in this play (and in the Greek myth) is simply the place where people go when they die rather than the alternative to Heaven, this statement is very telling of what I think Hell really is.

I am not trying to say that people are comfortable in Hell. I just think people will pursue pleasure in Hell the same way they do in life. Except, like the character in Shame, there is no real pleasure in it.

What else does this craving, and this helplessness, proclaim but that there was once in man a true happiness, of which all that now remains is the empty print and trace?
This he tries in vain to fill with everything around him, seeking in things that are not there the help he cannot find in those that are, though none can help, since this infinite abyss can be filled only with an infinite and immutable object; in other words by God himself.
- Blaise Pascal

People on earth try in vain to fill the infinite abyss inside them with everything they can find, "seeking in things that are not there the help [they] cannot find in those that are, though none can help." We can see this all of the time. A perfect example is from Woody Allen, who said in a recent interview,


When I look back on my life, I’ve been very lucky that I lived out all these childhood dreams. I wanted to be a movie actor, and I became one. I wanted to be a movie director, and a comedian, and I became one. I wanted to play jazz in New Orleans, and I played in street parades and joints in New Orleans and opera houses and concerts all over the world. There was nothing in my life that I aspired toward that hasn’t come through for me. But, despite all these lucky breaks, why do I still feel like I got screwed somehow?(6)

As I said in a past blog, all people have fires in their hearts and they are constantly trying to find water to put out their fires. What they use, however, is oil labeled "Water" that only makes the fire worse. This is exactly what I think people will be doing in Hell. And this, I think, is much more terrifying.

In The Dark Knight Rises, Bane describes a prison in which he spent most of his life. The prison is underground and there is a well-like structure that reveals the world above (see the picture at the top). Prisoners frequently try to climb out, but it is much too tall and treacherous for them to make it.

Bane says, "There's a reason why this prison is the worst hell on earth: hope. Every man who has ventured here over the centuries has looked up to the light and imagined climbing to freedom. So easy, so simple. And like shipwrecked men turning to sea water from uncontrollable thirst, many have died trying. I learned here that there can be no true despair without hope."

Bane might as well be describing Hell itself. Hell's inhabitants will be tormented with the need and desire to put out their fires, to fill their infinite abyss. The impurity they pursue in their lusts and degrading passions will be their hope. Indeed, like Bane, it will claim "I am necessary evil." It will promise fulfillment, but will not deliver. "You think the darkness is your ally?" It is just oil labeled 'Water.' It will just make them worse, as more drugs, more alcohol, and more sex make the drug addict, the alcoholic, and the sex addict worse. "The shadows betray you, because they belong to me." All the while, they will be tortured with the hope that the next dose will satisfy them. "Hope is really the key to torture." They will be slaves to this disposition; it will overcome them and control them. "Do you feel in charge?" This is what it means to be led by a "depraved mind." Nothing will satisfy them, because the "infinite abyss can be filled only . . . by God himself."

"Now those who belong to Christ Jesus have crucified the flesh with its passions and desires."  (Gal. 5:24)

Christ is our image of God, and he gave himself up for us. The Trinity is a union of self-sacrificing, self-emptying love. To be in Heaven would mean to be transformed into a state of this love. In this, we give up ourselves. We give up seeking to fulfill our infinite abyss. But, paradoxically, in dying to the passions and desires of our flesh, in giving up our focus on self-fulfillment, in losing our lives, we experience the fullness of the truth and we find life. "For if we have become united with [Christ] in the likeness of His death, certainly we shall also be in the likeness of His resurrection . . . for he who has died is freed from sin." (Romans 6:5,7)

In this, there will be no fire to put out, for we will be engulfed in an Ocean of transforming love. Rather than seeking to fill up our emptiness, we will be whole vessels of God's self-sacrificial, self-emptying, other-focused love!

I will conclude with a reminder:

Our job as disciples of Christ is to make people aware of the Ocean of God's love that can put out their fires. We are to dive into that Ocean and invite everyone to dive in with us.

Let us join the trinity in holding out our arms toward the lost. Let us be extensions of Trinity love--self-emptying, other-focused, compassionate, peacemaking, life-transforming. Let us lay down our lives for the lost, for no greater love is there (Jn 15:13).