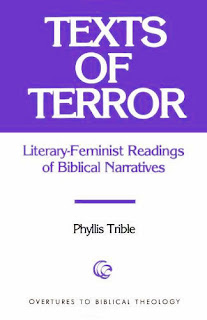 I bought a used copy of Texts of Terror and found that, despite describing the condition as "Used - Very Good," the previous owner took a paper clip or something and carved on the cover under the title: "Very bias Account." I guess he didn't like it (maybe it wasn't a 'he'...maybe). I thought, to be fair, it does say "Literary-Feminist Readings of Biblical Narratives." The author introduces her bent right in the title, so why was he so surprised that he carved a warning on the cover before selling it?

After reading the book, I think the previous owner had to have much more of a bias than Trible does. In fact, I found it funny that Walter Brueggemann in his forward for the book said things like, "[Trible's] presentation is free of every theoretical encumbrance." (p.ix) Indeed, while her four chapters wrestle with sagas that are particularly troublesome for feminists (Hagar, Gen. 16:1-16, 21:9-21; Tamar, 2 Sam. 13:1-22; an unnamed concubine, Judg. 19:1-30; and the daughter of Jephthah, Judg. 11:29-40), she is very fair in her assessments of them, and does not impose some kind of agenda onto the texts.

In fact, Trible's treatment of the texts is where the quality of her work lies. We have here an example of rhetorical criticism in its purest form. Her attention to detail in analyzing the narratives often produced wonderful insights, so that no page was left insipid. For example, Judges 19:30--at the end of story about the unnamed concubine being captured, betrayed, raped, tortured, murdered, dismembered and scattered--says, "And all who saw it said, 'Such a thing has never happened or been seen from the day that the people of Israel came up out of the land of Egypt until this day.'" Trible observed that the "verbal forms and the object [of the verse] are all feminine gender,"which , she says, "highlight[s] the woman who is the victim of terror." (p.81) Just about every page includes interesting observations like this.

Trible's studies revealed a grand poetry of the biblical prose, a mark that must have influenced her own writing, as Texts of Terror is extremely well-written. When talking about the statement the editor of Judges made after the story of the unnamed concubine--"in those days there was no king in Israel, and every man did what was right in his own eyes"--Trible made a clever observation considering the Davidic monarchy: "David pollutes Bathsheba; Amnon rapes Tamar; and Absalom violates the concubines of his father. In those days there was a king in Israel, and royalty did the right in its own eyes." (p.84) The book is full of such clever word-play.

Her analysis of the sagas themselves is equally commendable. So many of the biblical narratives are written so that a lot happens in just a few verses. Trible slows it down. Each story as presented in her book is read with eagerness, as it moves along with a building intensity. She is a fantastic story-teller.

Going into her work, I was expecting an attempt to resolve the theological issues raised by the narratives she covers. Why did Yahweh tell Hagar to return to Abram and Sarai? Why didn't Yahweh intervene to tell Jephthah not to sacrifice his daughter like he did with Abraham and Isaac? However, theological issues are not the focus here. Trible's focus was to single out women in the Bible who suffered terrible defeats, and who have so often been unheard and overlooked in biblical study. She focused on giving a voice to the voiceless, in order for the reader to do the same. This, she accomplished, and she did it well.