Book Review: A Whirlpool of Torment by James L. Crenshaw 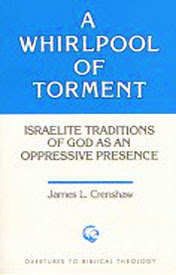 In this book, James Crenshaw covers five Hebrew Bible tales in which God subjects one of his creatures to a test that amounts to considerable oppression. These are: Abraham's sacrifice of Isaac, Jeremiah's confessions, the story of Job, Ecclesiastes, and Psalm 73.

The language used of God's activity in these stories is often over-stated by the author. For example, in assessing the "monstrous test" by a "fickle God" to his loyal servant Abraham, Crenshaw acknowledges that the story of Abraham and Isaac "stands at the liminal moment when human sacrifice ceases to commend itself as the proper means of expressing religious devotion" (p.26), but he doesn't entertain this as a possible motive for God's actions--instead, he resorted to making God out to be a monster. While the severity of the test has rightfully been emphasized, we should still be aware of the nuances present in the text.

Another example is that of his treatment of Job, which I found to be the least insightful section of the book. There, the story of Job is presented as purely between God and the man, where God is the enemy directly inflicting Job with terrible atrocities. Crenshaw severely downplays the presence of Satan (or 'the Satan') in the story, even referring to him as one of God's sons, who does nothing without divine approval (pp.58-59). He also leaves out any discussion of God's description of his battle with the chaos monsters. Surely in a section dealing with the theology of Job, Crenshaw would consider God's own response to Job!

Later in the book, in Crenshaw's assessment of Psalm 73, he says of v.22 ("I was stupid and unknowing; I was like Behemoth before you"), "Anyone who questions God's goodness presumes to know more than is accessible to mere mortals" (p.107). This is a concept I think he should have pursued further, especially in his treatment of Job, for this is the same conclusion Job came to after God unveiled to him the complexity of the universe, which is filled with cosmic warfare with chaos. The chaos monster theme is present in Psalm 73 as well, with the mention of Behemoth. Rather than fleshing out these vital portions of the texts, Crenshaw presents God as the main bad guy, the oppressive force in the narratives. In the case of Job, I think this is far from the truth.

The author of Psalm 73 learned in the process of writing the song that God is not the one behind everything. He starts out with an understanding that "faithfulness to God was rewarded by unrelenting suffering," that "God [had not been] good to the pure in heart" (p.103)--but then, his theology changes. Instead of God inflicting woe onto one of his pure-in-heart, now, "God was napping, for the world had fallen into the hands of violent people" (p.106). Then, another change occurs at the end with v.22, when he realizes that he, like Job, "spoke of things he did not understand" (Job 42:3), recognizing that the universe is more complex than he gave it gave it credit for. Crenshaw describes this process well, and I quite enjoyed this chapter.

The chapter on Ecclesiastes is probably the best scholarly work in the book, no doubt because Crenshaw is one of the leading scholars on biblical wisdom literature. His description of the spiritual state of the author was quite compelling and thought-provoking. As was his treatment of Jeremiah's laments, the brokenness and angst of which he captured quite well, and the content of which I never grow tired of studying.

Crenshaw also offers some good insights on moving beyond these stories to actual theology. He states, "the first principle of biblical faith is the assurance that God has crossed the chasm separating the finite and infinite, thus enabling creatures to recognize the holy," and the second is "the concession that all knowledge of God is partial" (p.77). For instance, he says there "is a fundamental difference between saying that God is an enemy and reporting that Job perceived God as an enemy" (p.116). With this, I wholeheartedly agree. Just because the experience of one of the Bible characters caused him to see God a certain way does not itself mean we should embrace that theology.

When this book was released, not a lot had been written about the intensely negative depictions of God in the Hebrew Bible. I think maybe Crenshaw wanted to break that spell by exploiting examples of such negative theology. What we find in his book is a pull-up-your-sleeves-and-dive-in treatment of such negative depictions. He is brutally honest--which might have been why he sometimes overstated his claims. Nevertheless, this book will force the reader to be honest about the text and wrestle with it, as he has done. I can't say it offers a resolution to the material, as he doesn't necessarily deny or affirm the theological truth of the oppressive traditions, but leaves the ambiguity there, settling for "a hidden God" (p.114). Such a conclusion does not lick the problem, but merely restates it.


Purchase A Whirlpool of Torment on Amazon (here)