Give Your Son a Barbie 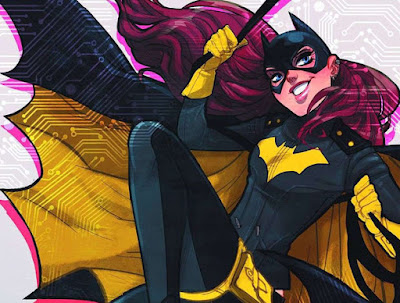 This week I was in Seattle visiting my family, and I got the chance to spend some time with my 3-year-old nephew Landon. At one point, we were watching Batman Beyond, and in my ignorance I asked if the woman in the super-suit was Batgirl or Batwoman. Landon answered that it was Batgirl, Barbara ("Bah-bah"). "Batgirl," he added adorably, "is Batman's best friend."

The next day, I was Christmas shopping at Toys-R-Us, and seeing that he knew so much about Batgirl, and already had plenty of Batman toys, I wanted to buy Landon a Batgirl action figure. My sister, however, objected, essentially saying that Batgirl figurines are for girls. Ignoring her, I went for the DC section, but there were no Batgirl action figures there. "Oh well," I thought, "I'll just get him something else." That was, until I happened to pass the Barbie section later, and saw multiple Batgirl action figures.

I picked up a Batgirl with a Batjet, overlooking the Batgirl barbie beside it. When I got to my sister to put it in the cart, she was on the phone with her husband, who informed her that Landon had specifically asked for a Batgirl action figure. Vindicated, I happily bought it and thought highly of myself. "I'm a good a feminist. I bought my nephew a Batgirl action figure. This will encourage him to look up to women action heroes."

I went home, wrapped the present, and then gave it to him to open, since I was leaving that night. He was so ecstatic, jumping up and down, and shouting that it was what he wanted. And of course it is always satisfying to come to know that you have perceived correctly and acquired the perfect gift, so I was also ecstatic.

But then something strange happened. Landon's two best friends are girls, and my sister and her husband purchased a Batgirl barbie for one of them, named JJ (which, by the way, is the name I went by as a kid). And when Landon opened his present and saw an awesome Batgirl action figure, he was happy, but also remarked that he wanted the one JJ was going to get--the barbie. This was the same barbie I saw at the store. I didn't think once to buy it for him, because barbies are for girls!

Landon, it turns out, might be more of a feminist than I am. His best friends are girls, and he has a handful of independent, strong women surrounding him. When his dad speaks of "bro time," Landon speaks of "girl-bro time." (I'm not kidding. He actually came up with that.) And when his mom and uncle think he wouldn't like a Batgirl barbie because such things are for girls, Landon wholeheartedly disagrees, because Batgirl is one of his favourite superheroes.

I hope this continues. I hope Landon continues to look up to women the same way he looks up to men, and defy stereotypes by liking both "masculine" and "feminine" things. I can now say that my 3-year-old nephew shows that these categories, these divisions, are unstable and inaccurate. Men are not naturally, inherently one way, and women another. Nancy Drew is not for girls while The Hardy Boys are for boys. Batman is not for boys while Batgirl is for girls.

We need to be more sensitive to what children are actually like, listening to them to understand who they are and what they are like, instead of imposing standards, divisions, and categories on them, like Toys-R-Us does with its toy divisions, operating under old presuppositions about what boys "are" and what girls "are," and so separating DC boy toys from Barbie girl toys.

Maybe your son wants a barbie for Christmas. Maybe your daughter wants an action figure. This week I learned not to ask what "boys and girls are like," but to ask what this child is like.
Posted by John Daniel Holloway at 3:56 PM