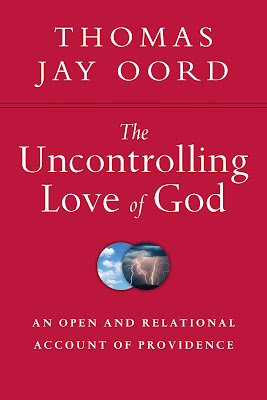 Thomas Jay Oord is, for me, one of the most compelling open/relational theologians writing today. His particular construction of open theology resolves some of the serious problems that arise in the work of other open theologians. He accomplished this in his 2010 book The Nature of Love: A Theology, by seeking to lay out a coherent theology that revolves around love. In his new book The Uncontrolling Love of God, he uses his theology of love to address the issue of providence, particularly as it pertains to the problem of evil.

He begins in chapter one by claiming that "tragedy needs explanation." If we have any theology, it needs to reckon with the evil and suffering we experience in concrete reality. He names this concrete reality by telling several stories that involve atrocities no good theologian could bear to overlook in addressing the question of evil and providence. Wherever our analysis goes in the forthcoming pages, he says, we must refer back to these stories as the standard for whether or not our theology is compelling.

In the second chapter, he discusses the inherent randomness of life, referring to experience and to science. His discussion of randomness based on science is more compelling than that of experience, (I will return to his treatment of experience in my overview of chapter three) but his overall point is a good one—to demonstrate that, empirically, we don't consider the universe as determined. Scientists recognize elements of unpredictability in the established order, and we in our experience assume such unpredictability.

But randomness, he says, is only one side of the coin. The other consists of life's "regularities"—such as, laws of nature, and morality. These regularities show that the universe is not altogether unpredictable, but is rather partly open and partly determined.

In chapter three, Oord deals with the topic of free agency. He applies his partly-open-partly-determined view of the universe to the human's free will. Humans are not absolutely free, he says, because we, by nature, have limited options:


We all know that we cannot do just anything we might imagine. For instance, we cannot fly to Mars this afternoon. We cannot change from being humans and become toads. We cannot all be president at once. We cannot freely put the entire moon in our basements. There are many things we cannot do, so skeptics say we must not be free at all. They seem to define free will as choosing among unlimited options and having no constraints. (58)

My criticism of this passage is that Oord does not provide an example of a "skeptic" who, seeing that a human can't become a toad, claims humans have no freedom at all. This seems like an exaggeration of the skeptic's case against free will. The passage also seems like a very conservative analysis of the human's limited options. What of the limitations placed on us because of our cultural conditioning, i.e. our presuppositions, established categories, inherent cognitive framework, etc.? Oord's silence regarding human situaded-ness makes me wonder if he thinks a human can assess options in an unmediated manner.

This leads to my next criticism of Oord's chapter on freedom--his argument from 'experience':


The most powerful evidence for free will is our own personal experience. In the way we act, we all inevitably presuppose we are, at least to some degree, free. I call this an experiential nonnegotiable. (60)

Free will is an experiential nonnegotiable, and our personal experiences tell us something true about the nature of reality. (61)

I sympathize with this approach, while, however, not being uncritical of it. I sympathize with it because, at the end of the day, we are dependent on our experience to receive any information about the material world—so much so that it is even possible the "material world" is an illusion! I am critical of it, however, because it neglects the possibility that we could be misled by our experience, that the Truth could be much different than what our experience leads us to believe.

Why does Oord think we can trust our experience regarding questions of ultimate significance? Is our experience not mediated by cultural conditioning, evolutionary conditioning, and finite scope? If I were to, for example, deem my shirt blue, I would, in Oord's mind, be justified because my experience tells me my shirt is blue. However, we know that the colors we see aren't descriptive of the objects our minds attach to them, independently of our perception. A humorous example of this, with a blue and black dress, recently went viral. The dress was blue and black, but that didn't stop thousands from seeing it as white and gold.

Oord also discusses "the problem of good" in chapter three. He says that, while theists have to reckon with evil, atheists have to reckon with good. "The problem of good is a real problem for unbelievers," he says (68). His only justification for this claim, however, is the assumption that phenomena must have explanations. If something is good, you have to explain why it is possible for good to exist in the world. But why do you have to explain it? He says "to make sense of life" (69), but he assumes that life is ours to make sense of, and I do not think this is a valid assumption. Already, in whatever ancient year it was, the book of Job claimed that the proper posture toward the chaotic abyss of the universe was humility and uncertainty. I think this might be a better framework than Oord's necessity of making sense of life.

In chapter four, Oord provides a helpful overview of different theologies of divine providence, complete with the problems he sees in various ones. They are too numerous to repeat here, but suffice it to say, Oord's overview is widely encompassing and well-balanced.

Chapter five includes Oord's overview of open and relational theology. He avoids merely repeating what has been published several times by including authors which have not normally seen the light of scholarship, such as Lorenzo D. McCabe, T. W. Brents, Jules Lequyer, Uriah Smith, and Edgar S. Brightman. Open theologians have much to uncover in the history of open and relational theology, and a lot of uncovered material to analyse, and it is commendable for Oord to begin to do so here.

Also included in chapter five is a fair comparison of process theology and open theology, as well as a helpful overview of the ways in which science has been in dialogue with open theology.

Perhaps the best chapter is the following one, which deals with John Sanders' theology of providence. In The Nature of Love, Oord looked at Clark Pinnock's theology, laying out in what ways it is strong and similar to his own, and explaining what he thinks its inadequacies are. He does the same with Sanders, and his criticism of Sanders ends up being quite similar to his criticism of Pinnock. That is, they both claim that God's is omnipotent and could always intervene to stop evil but often allows it to happen so that humans can be free. Oord, in both accounts, does a very good job of revealing how problematic these claims are. "The one who could stop genuine evil by restraining the perpetrator of evil," he says, "is morally responsible—or better, culpable—for permitting the painful consequences" (142-143)—and I could not agree more. He compellingly demonstrates that, in Sanders' theology, love does not come first.

For those who are familiar with Oord's work, there are no real surprises in the seventh chapter, for in it Oord offers his alternative to the models of God's providence he analyzed throughout the book—his "essential kenosis" theology, which claims that God is necessarily limited in power because it is in God's loving nature as a creator to share power with creatures. While as an a/theologian I find it ultimately unsatisfying (for reasons too complicated to go into here), Oord's "essential kenosis" theology remains, for me, the most compelling construction of open theology to date.

Oord's final chapter deals with the question of miracles. Orthodox Christians—including open theists, such as Sanders—often object to Oord's theology by pointing to miracles, which seem to them to be examples of God's unilateral activity. He has responded to this objection before, but here he dives into it in a more extensive manner. While an interesting assessment of the topic, I don't think Oord's response to the problem of miracles will sway his critics. I think he would do better to dialogue with historical-critical biblical scholarship on the subject, but part of Oord's project seems to be trying to keep an orthodox theology in tact while following his theological convictions. It is a noble task, even if a troublesome one.