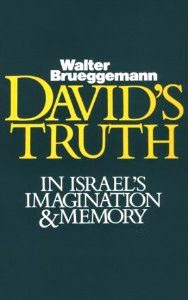 In David’s Truth, Walter Brueggemann tells us up front that he is not concerned with reconstructing the historical David, but rather engages in an exposition of the received David, the David of the biblical narrative: “I do not inquire about facticity, not what happened, but what is claimed, what is asserted here about reality.” (p.14) This distinction runs through most of his work, and is one of the reasons I am so fond of Brueggemann. A reconstruction of Israel’s history is doomed to be inconclusive, as there is so little off of which to make conclusions. Brueggemann sets aside such concerns and moves into how to understand the narrative, in this case how to understand David in the narrative. In doing so, he goes over four different portrayals of the “truth” of David in the biblical narrative: “the trustful truth of the tribe,” “the painful truth of the man,” “the sure truth of the state,” and “the hopeful truth of the assembly.”

When David enters the biblical narrative, he is described with an innocent and uncritical faith in his future. This is the trustful truth of the tribe. It is a celebration of David as the pious chosen one, over against the wicked and rejected Saul. Brueggemann says this trust is naïve in its positivism, but necessary in its hope, as “it tells, generation after generation, that the marginal ones can become the legitimate holders of power. . . . David is a model for the last becoming first.” (p.23)

As we get deeper into the story, we encounter a different voice, one of the painful truth of the man, which is not as unsuspecting as that of the tribe. This perspective pays acute attention to the humanness of David, in his experience of pain, as well as his iniquity. It is an honest portrayal of David the man and his inner experience, one in which death is his constant company, either with David as the sufferer or as the agent.

With literature of kingship, it is never surprising to find political propaganda, which the Davidic narrative suspiciously resembles at times. Brueggemann calls it the sure truth of the state. Whereas the tribe is uncritical because of a naïve hope directed toward David, the state is uncritical because of self-confidence and self-service. These portions of the story were “carefully handled and shaped and managed to serve political interests.” (p.70) This is where we find the Lord declaring over David, “Your house and your kingdom will endure forever before me; your throne will be established forever” (2 Sam. 7:16). Brueggemann describes it well: “There is, so it is claimed, no circumstance that will cause Yahweh to pull away from David and David’s family . . . [and] there is no way David will permit Yahweh to renege or escape [the promise].” (pp.77, 81)

Yahweh’s promise of “foreverness” over the Davidic dynasty is transformed in the hopeful truth of the assembly. Here, Brueggemann says, an exilic community takes the narrative of David and transforms it into a messianic hope: “this David is an imagined David who is a project of God’s will for the future.” (p.89) Like that of the tribe, this is a thoroughly positive portrayal of David, but it is not uncritical and naïve. Here, David is reimagined to represent “the whole people of Israel who now share in the promise.” (p.96)

Brueggemann’s treatment of the narrative of David is at different points insightful, powerful, challenging, and entertaining. He is a fantastic storyteller. In his storytelling, he makes the author of the narrative a character in the story, even if it sometimes becomes a Brueggemannian construct which lacks (perhaps on purpose) a revealed connection to authorial intent—but that’s one of the things that makes Brueggemann’s postmodern reading of texts so interesting.

Another strong facet of Brueggemann’s postmodern reading is his keen awareness of theological/ideological diversity in Hebrew Bible texts, the lack of which, he says, “tends to turn the Bible into a closed, ideological statement.” (p.98) His categories for understanding the narrative of David are quite helpful, and it is no surprise to me that this work is widely acclaimed.

In his introduction, Brueggemann says, “We may look for ‘the truth’ and find only David. Or we may seek for David and be surprised at meeting the truth.” (p.16) It is a profound statement which rings true. Trusting, innocent readers may search the Davidic narrative in the hopes of hearing from God, and be caught off guard by the humanness of the man and of the narrative. On the other hand, jaded, cynical readers may search it expecting to find humanness, and find amidst it the Word of God. Likewise, I think we may read Brueggemann’s book looking for truth and find only Brueggemann, or we may read it expecting Brueggemann but finding the truth.