Christian Commodity Fetishism: Interpretations of the Story of the Rich Young Ruler

A young man, apparently a ruler, asked Jesus how to obtain eternal life, to which Jesus answered, by following the commandments. After letting Jesus know that he followed the commandments quite well, Jesus told him to sell his possessions and distribute them to the poor. The young man hung his head like Charlie Brown and walked away, as he could not make that sacrifice.(1) A question Christians have wrestled with throughout church history is whether or not this is a necessary requirement for Christian discipleship. This issue was brought to the forefront of Christian thought when The Life of Anthony was published in the 4th century, a biography of a rich young man who was convicted by Jesus' money-talk and inspired to sell everything he had and live utterly dependent on the provision of the Lord.

Such radical self-denial would never be easily, or even completely, embraced by a whole religion, which is one reason why the rich young ruler passage has been interpreted a multitude of ways. For example, David Kling provides that, "as the West became more economically affluent, Jesus' words to the rich man taken in the literal sense appeared quaint and irrelevant."(2) The standard is just too radical. The thought of surrendering one's entire estate and living completely dependent on the provision of God and others naturally inspires a lot of fear and anxiety. Not to mention, the allure of selfish accumulation and extravagant abundance is often just too great a force. There is also the fact that the passage isn't exactly the clearest statement on discipleship. Ambiguity remains and has evoked a lot of varying interpretations for centuries. What can be said without a doubt is that Anthony provides us with an amazing example of Christian discipleship that should at the very least inspire Christians to be more selfless with their possessions.

Many might (and perhaps did) find it unfortunate that Anthony was not made subject to a more nuanced reading of Scripture. Some allegorize the passage and say that, "the rich man represented the Jews who remained tied to the law, whereas the poor represented the Gentiles open to the truths of the gospel."(3) Others, like Ambrose, bishop of Milan, maintain that, "Jesus gave counsel [to the young ruler], not a command."(4) Kling elaborates: "Perhaps Jesus was telling the young man that he had made possessions his consuming passion, and that he simply needed to reorder his priorities and not necessarily divest himself of his wealth."(5) Along these lines, Clement of Alexandria believed that, "Jesus' words really referred to the desire for, not the possession of, riches. . . . What truly matters is poverty of spirit, not poverty of possessions."(6)

Nevertheless, it cannot be denied that Anthony's life emanated tremendous power. Like Jesus, he emptied himself completely and was exalted for doing so (Phil. 2:5-11), as he became somewhat of a spiritual superstar; he "healed the sick and performed other miracles, offered guidance to fellow monks, argued with philosophers, and counseled emperors (Constantine and his sons), judges, and military officers seeking his advice."(7) In the end, whether or not Jesus' words to the rich young ruler were commands, it definitely seems like it was God's purpose for Anthony to sell all of his possessions.

Because there are such cases, many scholars have said that Jesus was "advocating a two-tier morality—one for the masses of ordinary Christians and another for an elite superior Christians."(8) So, elite superior Christians like Anthony are supposed to sell their possessions, but not all Christians are called to such sacrifice. John Calvin did not advocate this approach, but in somewhat of a similar fashion suggested that Jesus' command applied to the rich young ruler but does not apply to all people. "When Christ commands the covetous rich man," he said, "to give up all that he has, it is like commanding an ambitious man to give up all his honors, a voluptuary all his pleasures, or a shameless man all means of lust."(9) Likewise, Rob Bell lays out his take on the passage:


The man says he's kept all of the commandments that Jesus mentions, but Jesus hasn't mentioned the one about coveting. Jesus then tells him to sell his possessions and give the money to the poor, which Jesus doesn't tell other people, because it's not an issue for them. It is, for this man. The man is greedy—and greed has no place in the world to come.(10)

I would add that greed was not the only counter-Kingdom mindset under which this young man was operating. As a member of the upper class, the young ruler learned to praise success, and to seek upward mobility. As someone who accumulated all manner of material success, he wondered, "How do I accumulate spiritual success?" He learned from his accumulation that upward mobility is a process that never ends, as it never satisfies; there is always more. He followed the commandments, but that wasn't enough; he needed more success. Jesus' counter-empire ideology completely turned the tables on the young man: "rid yourself of your success and you will inherit the kingdom of God." Jesus advocated what Henri Nouwen called 'downward mobility'.(11) If the young man was going to participate in the kingdom of God, he would have to abandon his capitalist drive for success and embrace the ideology of the self-emptying, other-focused kingdom of God. 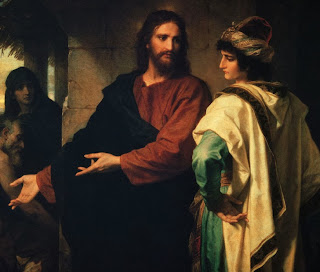 This dynamic interpretation of the rich young ruler passage could be supported by the other instance in Luke in which Jesus is asked how to obtain eternal life, this time by an expert in the law. In that case the correct answer was, "love the Lord your God with all your heart and with all your soul and with all your strength and with all your mind, and love your neighbor as yourself" (Lk. 10:27). To someone who is overly law-minded, loving God and neighbor needs to be emphasized. To someone who is overly wealth-minded, denouncement of wealth is necessary. However, this is complicated by the fact that love of God and love of neighbor are elsewhere said to be the two most important commandments (Mark 12:29-30). That being said, this does not necessarily contradict the interpretation that Jesus' command applies only to those people who are so attached to their possessions that it becomes a hindrance to their participation in the kingdom of God.

On the other hand, there are commentators like Larry Hurtado who say, "riches in themselves are a hindrance to a person's participation in the Kingdom of God and . . . the mere accumulation of wealth and consequent attachment to it can prevent a person from following Christ."(12) Along these lines, Peter Walpot said, "those who hold onto their wealth . . . are not able to become disciples and followers of Christ . . . [because] the person who keeps his property and possession does not obey Christ."(13) Similarly, but not so strict, Douglas Meeks suggests that the passage "shows the basic incompatibility between the abundance of riches and faithful discipleship. There is no optimism about rich persons relinquishing possessions and becoming disciples."(14) As Donald Hagner said of the passage, the "wealthy are generally held captive by their wealth."(15)

So then, surrendering one's possessions, as Ulrich Luz says, "is no more optional than . . . the love of one's enemies."(16) Ironically, the Luke 10 passage about the expert in the law could also support this interpretation. When Jesus is asked "How do I obtain eternal life?" in one story, he responds by saying 'sell all your possessions'; in another story, when asked the same question, loving God and neighbor is the answer. It could then be said that giving away one's possessions is just as important as loving God and neighbor, as both are necessary for obtaining eternal life. However, this is also complicated by the fact that love of God and love of neighbor are said to be the supreme commandments, and surrendering one's possessions is nowhere given that much significance. Although, 1 John 3:16-17 could point in this direction: "By this we know love, that [Christ] laid down his life for us, and we ought to lay down our lives for the brothers. But if anyone has the world’s goods and sees his brother in need, yet closes his heart against him, how does God’s love abide in him?" With this, it could be said that surrendering one's possessions for the sake of others is the practical application of loving one's neighbor and, therefore, Luz is correct.

All of the nuances of the story make coming to any actual conclusion about it almost impossible; but maybe that should tell us something. If it were a matter of salvation, would it not have been made clear? The idea that belief in Jesus is necessary for salvation runs throughout the New Testament; whereas, Jesus' teaching on possessions is much more ambiguous and not near as prevalent. I think it can at least be said that surrendering one's possessions is not an across-the-board requirement for salvation. However, it definitely can be a requirement for some, as it apparently was for the rich young ruler. So what do we take from the story?

First, we must learn, as Luz advises, "that a central issue of faith is how one deals with money. . . . The obedience of discipleship must fundamentally change the way we deal with our own money, because money governs the world, and following Jesus is love's protest against this 'government.'"(17) We must also acknowledge the temptation of commodity fetishism and the all-consuming seduction of wealth. In the words of Karl Marx, money "is the alienated essence of man's labour and life, and this alien essence dominates him as he worships it."(18) This praise of wealth must be abandoned if one is to participate in the kingdom of God. Thirdly, we should acknowledge that we can never give enough. Those who say that God only asks for 10% of our money (and that an organized church is where it should be distributed) are guilty of huge reductionism and bad biblical scholarship. Christian management of possessions is one of endless generosity.

Whether or not one agrees with the conclusions of Anthony and those like him on the story of the rich young ruler, we should all be able to see the power of God in his life, and should be able to learn a lot from his example. His story should bother us, in the sense that it gets us thinking about what Christ-like management and distribution of wealth looks like. It should also convict us and inspire us to be more selfless with our possessions. Jesus taught us that we can always be more self-emptying and other-focused. He also was a rich young ruler, but for the sake of others he got rid of his status and became a lowly human servant, and then went even farther, becoming subservient to death (Phil. 2:5-11). What we can learn from Anthony is what the incarnation can look like practically.