Words that Explode: More Quotes from Brueggemann's Theology of the Old Testament 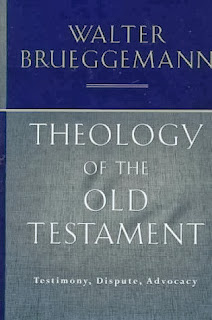 "It is my judgment that complaint addressed to Yahweh can be understood as Israel's moment of 'omnipotence.' Further, it is my judgment that because Christian practice has denied people this dimension of piety, the church inclines to produce 'false selves' who cannot be honest before God and so must 'fake it' with God." (475)

"[E]verything about the future depends on the readiness of human agents to take venturesome action toward Yahweh." (487)

"An ideology of scarcity produces a competitiveness that issues in brutality, justifies policies of wars and aggression, authorizes an acute individualism, and provides endless anxiety about money, sexuality, physical fitness, beauty, work achievements, and finally mortality. It seems to me that, in the end, all of these anxieties are rooted in an ideology that resists a notion of limitless generosity and extravagant abundance." (559)

"Enlightenment rationality, in its popular, uncriticized form, teaches that with enough reason and resources, brokenness can be avoided. . . . In such ideology there are no genuinely broken people. . . . The church, so wrapped in the narrative of denial, tends to collude in this. . . . The outcome for the isolated failure is that there can be no healing, for there has not been enough candor to permit it." (560)

"[P]ower--political, economic, military--cannot survive or give prosperity or security, unless public power is administered according to the requirement of justice, justice being understand as attention to the well-being of all members of the community. In an alternative theory of public power . . . power can sustain itself willy-nilly, even if it practices endless self-aggrandizement and brutalizing self-indulgence. Moreover, those who come to power are, characteristically, convinced (a little at a time) that their own well-being is the key factor in the maintenance of general well-being, prosperity, and security." (615)

"Wisdom teaching is an ongoing, developing process. Therefore, to halt the process by refusing to consider new experience is not 'right,' for it misrepresents Yahweh and Yahweh's reality in the world." (687)

"[T]he Old Testament in the modern world is endlessly vexed by and tempted to historicity; that is, to 'what happened.' . . . It is my judgment that Enlightenment modes of history have almost nothing to do with Israel's sense of Yahweh." (714)

"The motivation offered for Yahweh's actions in time of need are of various kinds, some of which are not congruent with 'innocent' Christian piety. That is, in addition to confessions of sin and statements of need and trust, Israel also seeks to motivate Yahweh to act by appealing to Yahweh's honor, vanity, and risk of shame (e.g., Num 14:13-16). I take it that the willingness of Israel to appeal to such risky motivations is a measure of the urgency of the petition. It is not possible or necessary to tone down such motivations to conform to a kind of 'pure faith,' for the Old Testament is not engage in 'pure faith,' and no amount of Christian romanticism can make it so. Israel is engaged in faith that must live honestly in the midst of an unfair and threatening world." (472)

Posted by John Daniel Holloway at 8:44 AM