Book Review: "Yahweh is a Warrior" by Millard Lind 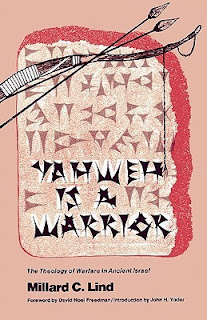 When I talked to a professor of mine about this book, he emphasized the fact that Millard Lind is a Mennonite and so, a pacifist. As a pacifist, he would only look at the warfare theology in the Old Testament in one specific light. While this might be true, it doesn't shine through completely in Lind's book. For the most part, Yahweh is a Warrior is an academic overview  and does not attempt outright to address the theological problem that the Ancient Israel's war material poses (except maybe in a comment here and there). Here, I will try to outline his overall treatment of the subject, and with that will provide what I think he might be suggesting as far as the theological problem is concerned.

First, Lind contends that the pre-Mosaic period as put forth in Genesis shows that early Israel was pacifistic (see chapter 2). I won't go into the specifics of his argument, but he basically provides that the violent historical events of this period are seen as wicked. Yahweh is not an agent of war or violence here. The exodus marks the drastic change in Israelite theology, where Yahweh becomes warrior and king; it "provides the fundamental paradigm of holy war in the Old Testament" (p.47). Furthermore, he shows throughout the rest of the book that the holy war narratives in the historical books (and probably the rest of Old Testament--he only covered the historical books) refer back to the exodus. The theology of holy war, then, was a theology inspired mainly by the exodus.

That being said, this was not without gradual changes. As Israel went along, more and more emphasis was placed on the human involvement in war; whereas, in the exodus, Yahweh was the sole agent. This shift in thinking comes to a particular fruition in the monarchical period:

With this, human involvement in war started to overcome the theology of Yahweh as the lone agent of victory in battle:


In the old tradition a military crisis was responded to by a voluntary militia which depended for victory upon the intervention of the divine. Miracle was now [in 2 Samuel] replaced by professional army. The pathetic attempt to preserve the form of the ancient tradition only highlights the fact that this form was emptied of its real content--faith in the decisive act of Yahweh--and replaced by faith in the professional army. The shift is further emphasized by the fact that Yahweh is not mentioned once in the narrative. (p.118)

As an aside, his use of the word 'pathetic' is probably telling of his pacifism; he obviously doesn't approve. This can also be seen in a statement he makes early on: "If one truly believes in the promise of grace that God will give the land, then one has no need to take the way of works by fighting for it" (p.38). To use the word 'pathetic' is to not understand the way ancient Israel operated as a community. While he no doubt did understand this (and better than I do), we see here the pacifist talking and not the biblical scholar. While I agree with his general sentiment, I wouldn't say the attempt was pathetic. The nature of and the nuance present within Israel's cultural development does not support such a claim.

So, then, one could gather from Lind's treatment that Yahweh liberated Israel from Egypt by force, and from this, Israel developed a theology of warfare, in which Yahweh was always on their side fighting for them, looking out for their interests at the cost of the interests of others. Over time, maybe Israel became a little more honest with themselves, acknowledging that they were the ones waging war. Or maybe their priorities changed; they came to honor warriors above prophets, and armies above Yahweh. Whatever it was, we return to the initial pacifism that defined the pre-Mosaic period when we come to Jesus, whom Lind brings up in the very last page, probably to suggest a kind of supersessionism (p.174).

Lind's approach carries with it a few problems. 1) He relies too much on the historicity of many of the narratives he covers, including the exodus. 2) He relies too much on the documentary hypothesis, which, as far as I have come to see, is more ambiguous than he treats it. 3) He is too confident about the dates of events. His whole treatment of the warfare material basically relies on the timeline he has constructed, one that may or may not actually be accurate. 4) He does not address the question of Yahweh's actual involvement in the war stories of Israel. He doesn't seem to object to Yahweh's involvement in the exodus, and certain comments of his suggest that he does not accept Yahweh's participation in other war stories, like the conquest; but why not? If they are as historical as he treats them, why shouldn't we accept Israel's testimony?

Overall, I would not recommend Lind's book for someone casually interested in the topic of war in the Old Testament. Not that it isn't good, but it is very dense and quite technical. However, for the serious student of this material, do not overlook it. It offers a lot, not just for the study of Israel's warfare theology, but for several areas of Old Testament study.


Purchase Yahweh is a Warrior on Amazon (here)