"Get behind me, Satan!" - How to be a Christ-like driver 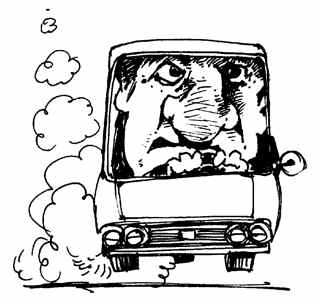 A lot of people who know me well may find it ironic that I am writing this blog. I am known for road rage. My personality is susceptible to a complete alteration when I get behind the wheel. I've yelled at other drivers, flipped out at red lights, I've done it all.
However, I have gotten a lot better in the past couple of years and have learned some tricks in keeping the "uncontrollable monster," the "demon driver" out of my car.
Hopefully, you will find this helpful if you are in my same boat (more than likely, you have at least been there before).

2. "Blessed are the peacemakers."

If a driver behind you comes up real close to try and pressure you to get out of the way, just get out of the way. Don't break-check him. That will make both of you angry. Don't align yourself with the car in the next lane so he can't get around you. That just causes long-lasting strife and a hell of a lot of anger. Just get out of his way as soon as possible.
If a driver in front of you is super slow, just slow down. Don’t freak out. Don’t follow closely.
Don’t—God forbid—honk. Just slow down and chill out.

If a driver wants/needs to get in front of you, let him in! I have found that it makes me happier to always be the one to let people in. Don't speed up, don't get real close to the person in front of you, just let him in. You know you would want the same. You should do all driving with the attitude of the golden rule.

There are a lot of stupid drivers in this world. Particularly here in Virginia, there are plenty of stupid drivers. People will cut you off, they will hit their brakes for no apparent reason, they will wait until the last second to merge into a lane, they will go incredibly slow, they will slow down 10 mph every time they see a cop even if they were barely going the speed limit, they will do all kinds of stupid things that would normally drive you crazy. Forgive them. You have done something stupid while driving as well. So pardon them. You would do it if it was someone you know and like, so do it because that could be the only time you ever have to bless whoever it is.

5. "Love your enemies, do good to those who hate you, bless those who curse you, pray for those who abuse you."

Confession: I was driving up to Virginia from Florida when I ran into some traffic. I was among 20 cars piled behind a single car in the left-hand lane. At the front of the line was a jeep that was barely going the speed limit. To the right of us was a stream of cars that made it impossible to go around anyone. The jeep aligned his car with the car beside him so that no one could go around. This was a rolling road block, and it continued for 30 minutes. Over that time, the line of cars kept getting bigger. He simply would not get over. I wanted to get to Virginia as soon as possible. At that point, I had driven about 12 hours that weekend and was ready to just get home, so I was angry. I became so angry that I began to hope terrible things about that driver. "I hope he runs over a nail!" "I hope his car breaks down!" "I hope he gets into a car accident!" It hurts to think about and to confess. I was at the peak of my wickedness. When the right-hand lane finally opened up, 20 cars passed him, and when it was my turn—I am ashamed to say—I had an urge to give him the finger (though I did not).
There are better ways.

I spent those 30 minutes in utter strife, bitterness, and anger. My advice for when this happens to you/what I plan to do next time: call someone. Call someone with whom you can pray for that person. And then either change the subject and keep talking or, if that isn't possible, when you get off the phone speak a blessing over that person's day and listen to some music or, even better, talk to God. Ask him to teach you how to love. Ask him to teach you how to be a Christ-like driver.

Being bitter towards other drivers will make your drive miserable and will do nothing to them. I was incredibly bitter to the guy in my story, and how do you think that affected him? It didn't. "Bitterness is like drinking poison and waiting for the other person to die." Don't be that kind of driver.

Don't try to teach other people lessons. They're not going to learn anything. They will either get angry or won't even recognize what you're doing and will just think you're being a jerk. This will just cause strife for both parties (or just you).

Be as positive as you can in your perspective. I could choose to think that the driver in my story was facetiously trying to get on people’s nerves by creating and maintaining a rolling road block and was excited at how successful he was. Or I could choose to think that he had no idea what he was doing and was just being absent-minded. Granted, this is still pretty dumb and frustrating, but this perspective makes it easier to pray for and forgive that person.

This is the hardest one for me. The only advice I can provide here is that when you are in need of patience, pray for it. Ask God to give it to you. Ask God to show you how to have it. Think about what patience is and what it means to have it. Dwell on patience. Picture what patience would look like driving. Imagine what kind of driver you would be if you did practice patience. Gradually, dwelling will become practicing.
Red lights: when/if you pray before you start driving, use that time to pray for patience during red lights. Also, it helps me when I expect to hit every single red light before I begin to drive. Once I do that and come to terms with it, I don't get angry at every red light. Then, when I get to a green light, it's like a pleasant surprise! You could also use the time at red lights to pray for more patience.

There will come a point when you must practice self-control. When you feel the urge to scream, "Get behind me, Satan!" to the car in front of you, look to yourself and say "Get behind me, Satan!"
Say to your soul, "Soul! Relax, eat, drink, and be merry." (Luke 12:19)
Conclusion:
“love, joy, peace, longsuffering, kindness, goodness, faithfulness, gentleness, self-control”
These are the fruits of the Spirit. Do your best to exhibit them in everything you do on the road.
Love all drivers,
maintain joy and peace within your car at all times, and always avoid strife and anger,
be patient—longsuffering—in your dealings with other drivers (because sometimes you will just have to suffer long),
be kind and do good unto other drivers,
remain faithful to God in your driving,
be gentle in your response to drivers, and be gentle with your car (for those of you who are like me and feel like punching something when you are super angry),
which brings me to the last—and most important—point: control yourself.

Now, drive and sin no more.
Posted by John Daniel Holloway at 11:01 AM