A Little Bit of Marxist Theory: Lenin on How to Inspire a Revolution 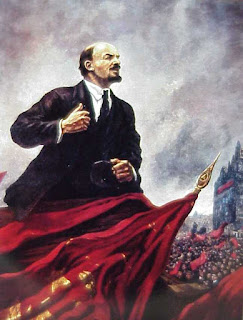 In “What is to be done?” Lenin argues against the idea that revolution just happens, that resistance manifests itself spontaneously among the working class. Lenin saw this view espoused in the paper Rabochaya Mysl. An article in this paper claims that “The virility of the labor movement is due to the fact that the workers themselves are at last taking their fate into their own hands, and out of the hands of the leaders” (quoted on p.78). Lenin explains that those who espouse such views “imagine that the pure and simple labor movement can work out an independent ideology for itself, if only the workers ‘take their fate out of the hands of the leaders’” (p.81).

Lenin calls this “a profound mistake,” because it neglects the all-too-important aspect of ideology, the way that the masses are manipulated into embracing the status quo. “Consciousness was completely overwhelmed by spontaneity,” he claims (p.79).

Not only do the theorists Lenin criticizes neglect ideology, but they actually put down theorists like Lenin for “exaggerating the role of the importance of ideology” (p.81). They assume the revolutionary consciousness will organically develop amid the working class. As Karl Kautsky explained, they “believe that Marx asserted that economic development and the class struggle create not only the conditions for socialist production, but also, and directly, the consciousness of its necessity” (quoted on p.81). What is neglected, then, is the way ideology reinforces the status quo, and promotes complacency among the working class. Furthermore, the necessity of a counter-claim, of a subversive ideology, is neglected as well.

Lenin’s concerns, then, should easily be appreciated. We cannot downplay ideology in a resigned, “It will work itself out” mindset regarding revolution. We are up against a vast apparatus designed to pacify the masses. We cannot assume that revolutionary consciousness will just happen. (After all, in our own time the struggles of a good portion of the working class have led not to revolutionary consciousness but to Donald Trump!) What is needed is a Social-Democratic consciousness, and this does not organically arise from the workers, according to Lenin.

The workers are limited to “trade union consciousness,” which only leads to “fighting against the employers and for striving to compel the government to pass necessary labor legislation, etc.” (p.74). Trade union consciousness is that which is still compatible with the status quo. The theory of socialism, however, is a different matter—and it “grew out of the philosophic, historical and economic theories that were elaborated by the educated representatives of the propertied classes, the intellectuals” (p.74). Kautsky similarly states that “Modern social consciousness can arise only on the basis of profound scientific knowledge” (quoted on p.82).

So, according to Lenin and Kautsky, Social-Democratic consciousness was arrived at by intellectuals who followed the right path through reason, and they in turn introduce it to the proletariat, who can then be equipped to apply it. Thus, as both Lenin and Kautsky state, “socialist consciousness is something introduced into the proletarian class struggle from without (von Aussen Hineingetragenes), and not something that arose within it spontaneously” (quoted on p.82). Resistance is inspired by the philosophical and theoretical wisdom provided by those like Lenin and Kautsky.

This, however, is where Lenin, in my mind, takes a wrong turn. His is a highly romantic rendering of intellectuals, no doubt stemming from Enlightenment ideals similar to those of Immanuel Kant. In “What is Enlightenment?” Kant states that the masses are too fond of their tutelage to enlighten themselves, so that each has become “really incapable of making use of his reason, for no one has ever let him try it out.” Thus, “the public can only slowly attain enlightenment.” They need help from free intellectuals like Kant in order to be free. The Enlightenment intellectuals are like the philosophers from Plato’s cave analogy, leading the deceived cave dwellers (who cannot lead themselves) to the light of day.

This is the ideological tendency Lenin displays in his essay. On the one hand, he has a consciousness which is sensitive to the interests and needs of the working class (after all, he is a communist); but on the other hand, he displays an elitist and privileged understanding of the theory of resistance. While we cannot depend on the working class organically developing its own revolutionary consciousness, we can no more depend on the reasoning of intellectuals being charitable and just.

Lenin demonstrated with his appointment of Stalin as General Secretary that intellectuals cannot be depended on for doing what is best for the masses. Lenin's philosophy too easily made way for the authoritarian regime of Stalin. And so the idol of the Intellectual Messiah totters.

Posted by John Daniel Holloway at 9:57 AM