A Little Bit of Marxist Theory: Karl Marx on Alienation 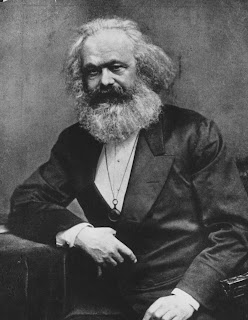 The worker--"the free proprietor of his own labour-capacity"--meets the owner of money in the market. They enter into a relation with each other “as on the basis of equal rights, with this difference alone, that one is buyer, the other seller; both, therefore, equal in the eyes of the law.”[1] The worker does not have the means of production; the capitalist does. The capitalist needs a worker to produce his goods, and the worker needs the means of production necessary to exercise his own labour-capacity. This is a free, mutually beneficial relationship. Or so it seems.

At every step of the process, Marx says, “the use-value of the labour-power is advanced to the capitalist: the labourer allows the buyer to consume it before he receives payment of the price; he everywhere gives credit to the capitalist.”[2] Furthermore, “The consumption of labour-power is at one and the same time the production of commodities and of surplus value.”[3]

Having already fixed the price of labour-power in the contract, the worker does not experience the benefits of his surplus. The capitalist alone gets to decide what happens with the surplus. The capitalist accumulates all the additional capital which the worker’s labour produces. With this, he is empowered even further to invest in the means necessary to make capital-accumulation easier, ever-maximizing the surplus.

The capitalist can now, say, purchase a machine that can do what the worker does, but can produce more and at a rate no human ever could. The worker “therefore produces, along with the accumulation of capital produced by it, the means by which itself is made relatively superfluous … and it does this to an always increasing extent.”[4] Marx explains quite poignantly the great injustice of this arrangement:


All means for the development of production transform themselves into means of domination over, and exploitation of, the producers; they mutilate the labourer into a fragment of a man, [and] degrade him to the level of an appendage of a machine. … [Additionally], all methods for the production of surplus value are at the same time methods of accumulation; and every extension of accumulation becomes again a means for the development of those methods.[5]

The worker is reduced by the capitalist to a mere instrument, whose sole purpose as far as the capitalist is concerned is to make him money. As the worker is incorporated into his money-making system, the capitalist accumulates more capital, and so gains even greater power over the worker, even acquiring the ability of making the worker superfluous, widening the power-gap and wealth-gap between them. The worker thus contributes to his own demise.

This is “the alienation of the worker in his product” that Marx describes in his Economic and Philosophic Manuscripts of 1844:


The worker is related to the product of his labour as to an alien object. For on the premise it is clear that the more the worker spends himself, the more powerful becomes the alien world of objects which he creates over and against himself, the poorer he himself—his inner world—becomes, the less belongs to him as his own.[6]

As the worker becomes more and more superfluous, there develops a large number of people who are out of work, and thus a substantial stock of available workers—an industrial reserve army. This puts pressure on the employed workers not to strike, as they would risk being fired and easily replaced by recourse to the industrial reserve army. The worker is thus pressured to submit to the demands of the capitalist.[7]

The theologian Karl Barth called this system “oppressive” and a “social injustice” that makes “industrial peace … radically impossible” to attain.[8] Indeed, it is clear this freedom is no freedom. The buyer and the seller are not equal.


He, who before was the money owner, now strides, in front as capitalist; the possessor of labour-power follows as his labourer. The one with an air of importance, smirking, intent on business; the other, timid and holding back, like one who is bringing his own hide to market and has nothing to expect but—a hiding.[9]