Donald Trump is Not a New Yorker 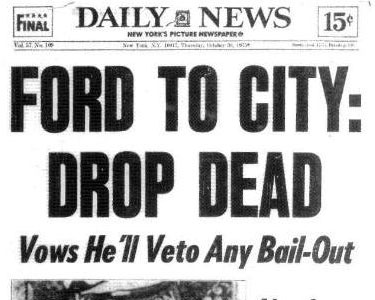 At the Women's March last month, the best protest sign I saw all day said,
"CITY TO TRUMP: DROP DEAD."

A little NYC history is needed in order to understand this sign.

In 1975, the city of New York confronted a significant financial crisis. It was close to filing bankruptcy as it did not have enough money to cover normal operating expenses and had been denied the necessary loans. The only thing that could save the city was a loan from the federal government.

Initially, president Gerald Ford denied the loan, saying, “I am prepared to veto any bill that has as its purpose a federal bailout of New York City to prevent a default."

NY Daily News then published a front page story with one of the most famous headlines of NY history: "FORD TO CITY: DROP DEAD."

The message was clear: by denying the city any aid, Ford was issuing its death warrant. Two weeks later, Ford signed a bill that allocated $1.3 billion to help the city recover, after being advised that letting the city default would bring the worse outcome. 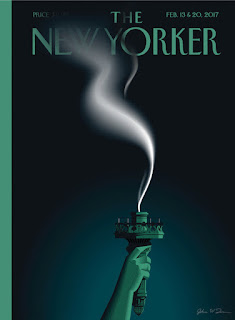 The "CITY TO TRUMP" protest sign that I saw at the Women's March was my favorite because it said so many things at once. It was a reference to a famous headline in NY history, the article of which concerned the very survival of the city. By alluding to this historic event, the protest sign made the bold statement that Trump's views and policies are fundamentally anti-New York.

Donald Trump is not a New Yorker, this sign proclaims. And it's correct.

I was not born here. I have only lived in New York for a year and a half. But I am tempted to say that I am more of a New Yorker than Donald Trump, and that's because I have learned enough about New York and its history to know that Trump's policies go against one of the essential parts of what has made New York New York from the first couple decades after the Dutch settled in what they called New Amsterdam.

The word 'xenophobic' has been thrown around a lot since Trump has come to the fore of American political discourse. It's one of those big bad words that gets thrown in with "racist, sexist, homophobic, et al." I never used it, but, honestly, it's because I didn't know what it meant (and I have the suspicion that many others who do actually use it don't know what it means, but simply adopt it as part of their kneejerk liberalism). Now that I know what it means, however, it certainly describes Trump's outlook.

Xenophobia, simply put, is fear of the other. It manifests itself in prejudice against strangers and foreigners--refugees, immigrants, Muslims, etc. Trump's entire outlook on foreign affairs could be identified as xenophobic. His travel ban is fundamentally and categorically xenophobic.

New York City, on the other, is the anti-xenophobia city par excellence. Only a couple decades after the Dutch settled here, 18 languages were spoken in the small area of New York that we now know as lower Manhattan. I need not describe the present diversity in New York City, as I would only be reiterating what everyone already knows about New York. 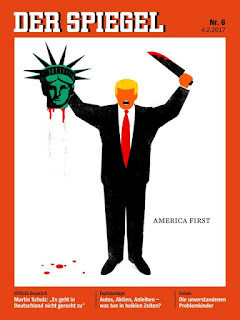 The Statue of Liberty's presence at the entryway of the city's port is the most appropriate statement of what New York is and represents.

"Give me your tired, your poor,
Your huddled masses yearning to breathe free,
The wretched refuse of your teeming shore.
Send these, the homeless, tempest-tost to me,
I lift my lamp beside the golden door!"

This, the city proclaims to the world, and the call has never gone unheeded. People have come from all over the world to participate in the democratic dream that is New York City.

The dream of New York is the dream Donald Trump wants to crush with xenophobia and nationalism.

And that is why Donald Trump is not a New Yorker.

And that is why the city declares to Trump: