Sermon on the Parable of the Prodigal Son 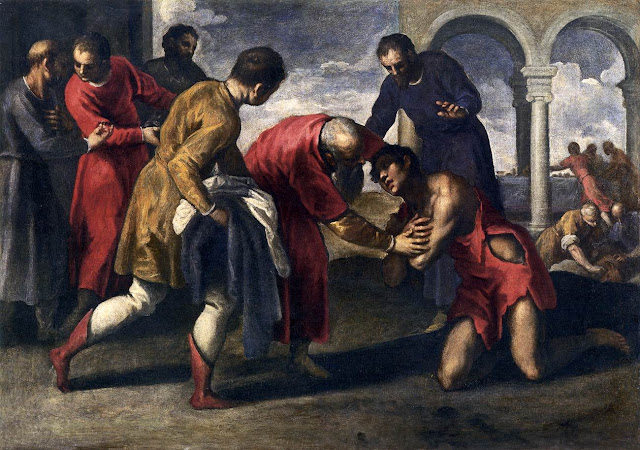 “Now his elder son was in the field; and when he came and approached the house, he heard music and dancing. He called one of the slaves and asked what was going on. He replied, ‘Your brother has come, and your father has killed the fatted calf, because he has got him back safe and sound.’ Then he became angry and refused to go in. His father came out and began to plead with him. But he answered his father, ‘Listen! For all these years I have been working like a slave for you, and I have never disobeyed your command; yet you have never given me even a young goat so that I might celebrate with my friends. But when this son of yours came back, who has devoured your property with prostitutes, you killed the fatted calf for him!’ Then the father said to him, ‘Son, you are always with me, and all that is mine is yours. But we had to celebrate and rejoice, because this brother of yours was dead and has come to life; he was lost and has been found.’”


Have you ever had an experience that made you think,
“How did I get here?”

You have an understanding of the world, of yourself, and of what’s possible…but then something happens.

Maybe you do something. Or maybe it happens to you. Whatever it is, it changes you forever. You don’t know what to expect from life anymore.

I’ve had such experiences. I remember looking at myself in the mirror, after everything had gone wrong, and realizing, I’ve heard about this happening before, but it was always to someone else.

And there I was, having to know what it felt like.

That’s what I think of when I think of the prodigal son. He had squandered his inheritance, and was now staring longingly at the food pigs were eating. Surely things can never go back to the way they were.

He thinks of home and says, “It would be nice to just be a servant in my father’s house.”

In such times, you forget what it’s like to feel normal. Whatever it was, you know it isn’t how you feel now, and all you want is a taste of that former life—a taste of home.

But maybe you haven’t had that kind of experience. Maybe you’ve led an upright life, and that has paradoxically been a source of sorrow for you.

You did what was right. You played your part. But you received a most unfitting result.

Maybe you were a diligent worker, but couldn’t find a job, or lost one. Meanwhile, you know someone who just gets lucky and finds the perfect job with the big salary.

Or you were a good spouse, and your partner cheated on you. You didn’t do anything wrong. You were caring and considerate.

Your experience is not one of personal failure and regret, but one of unfairness and injustice.

It is important to note that both sons need restoration and reconciliation.

Each son in the parable is separated from the father—the younger son leaves and the elder son refuses to go into the house.

And each son has to return to the father.

The father is the agent of reconciliation.

He was always preparing a place for his lost son, always ready for the moment his son would come into view.

You can imagine him looking out at the horizon every day, hoping for his son’s approach.

You can imagine him keeping a space ready in the house, just in case.

The father never stopped actively anticipating his son’s return, so that when his son’s shape emerges on the horizon, he immediately rushes out to meet him.

He never questions his relationship to the elder son. He is there for him, and wants to give him anything he wants.

He says, “You are always with me. All that is mine is yours”—as if to say, “Ask and you shall receive.”

The father’s love is steadfast and warm.

His land is not a factory, but a home—a home which is always there, always open, always welcoming,

no matter what happens.

When I was thinking about this sermon, I thought of the Empire State Building. (Obviously.)

Not even a year after the stock market crash of 1929, construction began on what was to be the tallest skyscraper in the world.

It is hard to find a better example of something which demonstrates the imprudence and overconfidence of the roaring twenties—and yet, its construction began right at the sad end of this period. 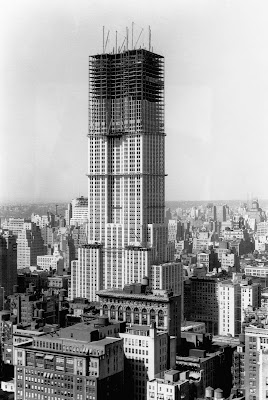 It was so superfluous by the time it was finished that they had to hire someone to go to every floor and turn the lights on before dark, so that the building looked occupied when most of it wasn’t.

People were afraid for their future. The rich were losing money; the poor were losing jobs. Life was increasingly grim, with no sign of good tidings around the corner.

And yet, every day, little by little, this enormous building was going up right in the middle of Manhattan.

I used to resent the building for this reason. The audacity of it. Did it not mock the experience of the millions of people who surrounded it?

But now I see something of a parable in it.

Almost wherever you were in Manhattan, whatever hardship you were experiencing, you could look up at the construction and think, “And yet, it goes on! And yet, it shall be built!”

Despite all the turmoil happening around it, it was still - being - realized.

The father’s home in the parable is like this.

The younger son leaves, or he returns; the father’s home remains the same.

The elder son comes, or he refuses to come; the father’s home remains the same.

For this is the nature of the kingdom of God.

It is always open, always ready for visitors, never closed on account of extreme weather conditions.

The lights are always on.

It is constant, eternal. Like the construction of the Empire State Building, it goes on in spite of everything that happens around it.

Our lives as Christians, as citizens of God’s kingdom, should reflect this reality.

But we, like the sons, often experience a radical dissonance in our lives, a separation from peace, from justice, from wholeness.

Paul says in II Corinthians 5 that “while we are at home in the body, we are away from the Lord,” and we long to be “at home with the Lord.”

Can we ever say we experience the kingdom of God? Aren’t we always separated from it, always pulled in other directions?

The news pulls us in one direction; our job, another; our family, yet another; and so on.

The world rages on, and often to our peril.

The theologian Karl Barth said we should read the Bible alongside the newspaper, but we need to do theology as if nothing ever changes.

The kingdom of God is not something that adapts to the news. God doesn’t standby for word from the city on whether the kingdom should open today.

No, it is always there, in our midst, ready for us, waiting for us, but ultimately going on in spite of us.

It is our home.

And our return home is our resurrection.

“This son of mine was dead and is alive again,” the father says.

For the home in 1st century Galilee was not the place you went every Christmas, often only out of obligation. The home is where you worked, raised your kids, and watched your kids raise their kids.

Home was life together.

The father in the parable lives and breathes this togetherness. The sons have to be reconciled to it.

The younger son shows us what happens when we abandon home altogether. There we encounter the misery and despair of cutting ourselves off from the wellspring of faith and hope.

The elder son shows us that returning home is something we must continually choose to do, no matter what happens.

Our works, our merit, will not protect us from injustice, or comfort us when we are wronged. We cannot acquire for ourselves a life of luxury and tranquility, in which all our worries are subsided, all our anxieties resolved.

No, returning home requires an alternative way of reckoning the events of life, one in which we put faith in the words, “You are always with me. All that is mine is yours.”

Whatever happens, wherever you are, however you feel, still the father says, “You are always with me. All that is mine is yours.”

This doesn’t become less true when we screw up and feel unworthy, or when nothing seems to be going right, or when our nation starts to resemble a dystopia.

It outlasts all the evil and injustice, all the sin and death, that plague us in this life.

And so we must always return home,

to faith in God,

to hope in the kingdom,

Posted by John Daniel Holloway at 9:04 AM