To my Regent friends, 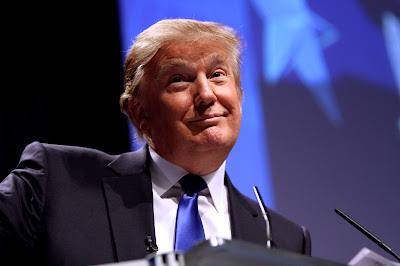 I am eager to get back to Virginia Beach and spend time with you. A lot of time and distance separates us now which I hope to remedy by a visit sometime soon.

Generally speaking, you are much more conservative than I am, which I know makes what I am about to say much easier for me to say than it might be for you. I recognize our differences, even as I don't think they should take away from my central point.

Donald Trump appeals to all the qualities in us that are against Christ. As bold as this statement is, I find it inescapable.

His worldview has rightly been described simply as Trumpism. At the end of the day, he cares only for himself. He spends much of his speeches talking about how well he's doing in the polls, how many people come to his events, how much he boosts the ratings of whatever network he's on, etc. If he's not talking about that, he's berating people who have called him into question, or challenged his views, or have leveled harsh judgments against him. He is easily insulted, and cares more about attacking his opponents than representing the American people--let alone the poor and needy.

When he's not talking about how awesome he is, or attacking people, he is appealing to people's fear, hatred, and ignorance. I have no doubt that his wide success is mostly due to his ability to pinpoint fears, frustrations, and fallacies that creep up in people's minds, and then magnify them.

Let Christ be the standard by which you measure Trump's integrity and good-will. Let your opinions of him be determined by how the Bible describes good leaders. King Josiah was righteous because he "defended the poor and needy" (Jer. 22:16). Jesus "did not consider equality with God something to be used to his own advantage; rather, he made himself nothing by taking the very nature of a servant . . . he humbled himself" (Phil 2:6-8).

I don't buy at all that he is a Christian. Anyone with a teaspoon of suspicion can see that his piety is a facade. The way he waves the Bible and talks about it shows that he is trying to pretend like he's a Christian, and it's difficult for me to imagine Christians being that easily fooled.

Don't let Trump magnify the un-Christian qualities within you. His way is the way of idolatry and injustice. Attune your minds to the teaching of Christ, and look to Scripture for the characteristics of a just leader. I am certain (and many of you know how much I hate that word) that if you do so, you will not find any justification for supporting Trump.