The Historical Romans 9, or Why everything you thought you knew is wrong

John Sanders rightfully states that double predestination is what happens "when Romans 9 is divorced from its historical setting and universalized into a timeless truth."(1) Indeed, it is because this chapter has been read the way it has since Augustine that it seems to obviously support double predestination. Rather than dealing with the topic of individual salvation, James Dunn provides, Paul here "is thinking solely in terms of salvation-history, of God’s purpose for Israel."(2) He is talking about Israelites, addressing their history and their future, and is defending God's righteousness and faithfulness in his dealings with them: "It is not as though the word of God has failed" (v.6). With that, let's dive in:


11-16: For when they were not yet born nor had done anything good or evil, in order that the purpose of God should stand in terms of election, not from works but from him who calls, it was said to her, "The elder will serve the younger," as it is written: "Jacob have I loved, but Esau have I hated."

What then shall we say? There is no injustice with God, is there? Certainly not! For to Moses he says, "I will have mercy on whom I have mercy, and I will show compassion to whom I show compassion." So then, it is not a matter of one who wills or the one who runs, but of God who shows mercy.

With this passage, rather than supporting the doctrine of arbitrary or unconditional election, Paul is making known that the election of the Israelites never had anything to do with what they did: "not from works . . . not a matter of one who wills or the one who runs." Dunn states Paul here is using Israel's own scriptures on their election to refute the idea that their "obedience to the law . . . was a factor in sustaining their covenant status before God."(3) He is making known that their election was solely an act of God's mercy and compassion. One would have to read the Calvinist doctrine of unconditional election into the text, because Paul is not referring to all the elect people in Christ, he is talking about elect Israel.


17-23: For the scripture says to Pharaoh, "For this purpose I raised you up, in order that I might demonstrate in you my power and in order that my name might be proclaimed in all the earth." So then, to whom he wills he shows mercy, but whom he wills he hardens. [I explore this last verse in my blog on divine hardening here]

You will say to me then: "Why does he still find fault? For who has resisted his will?" On the contrary, who are you, man, who answers back to God? Does the thing made say to its maker, Why have you made me thus? Or does the potter not have the right over the clay to make from the same lump one vessel for honorable use and another for dishonorable use? But what if God, willing to demonstrate his wrath and to make known his power, bore with much patience the vessels of wrath made ready for destruction, in order that he might make known the wealth of his glory on vessels of mercy which he prepared beforehand for glory?

It is no coincidence that Paul brings up both the rejection of Esau and the hardening of Pharaoh within a few verses of each other. Dunn provides, "God's redemption of Israel from Egypt meant that Pharaoh had filled the same sort of antithetical role" as that of Esau, who became the counterpart to his brother when Jacob was chosen and he was not.(4) Paul is using these examples to build up to a point, and that point is this:


The antithetical role filled by Esau and Pharaoh in relation to Israel's election and redemption is now being filled by the bulk of Israel in relation to God's calling of Gentile as well as Jew through the gospel.(5)

Whereas, before, Esau was the counterpart to Jacob's chosenness and Pharoah was hardened, now Israel is the counterpart to the inclusion of the Gentiles and they are hardened. In this, God remains faithful because the gospel was always the goal of God's covenant.(6) Israel is the one who failed by rejecting the gospel. Thus, Paul's question, "Who are you who answers back to God?" is valid, since the "disobedient and obstinate" Israelites (Rom. 10:21) are the ones who are questioning God's treatment of them.

Vessels of wrath are not arbitrarily chosen by God before time to be prepared for destruction; nowhere is that provided. Vessels of wrath are such vessels because they made themselves that way. This is indicated by the potter and clay quotation from Isaiah, in which Israel was defying God's will (Is. 29). It is also indicated by the statement, God "bore with much patience the vessels of wrath" (v.22). In 10:21, Paul makes this point a second time, quoting Isaiah again, "All day long I have held out my hands to a disobedient and obstinate people." Why would God have to bear with much patience a people that he molded to be vessels of wrath? Why would he hold out his hands all day long to a people he made disobedient and obstinate? It would simply not make any sense at all. 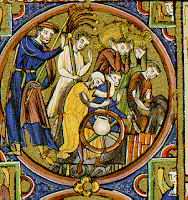 Additionally, we must also consider the nature of God's wrath. I explore this topic more here and here, but suffice it to say, Romans 1:18-32 shows us, "God's wrath comes upon man's rebellion. . . . [M]an cannot escape responsibility for his fitness for destruction; on the contrary, in striking free from God he assumed the primary responsibility for what he became."(9)

Paul's point is that God can deal with the Israelites however he wills, and that he is righteous and faithful in his judgment. They have been hardened because they made themselves vessels of wrath, just as Pharoah was hardened because he made himself a vessel of wrath.

However, vessels of wrath do not have to stay that way. This is indicated by the use of the potter analogy, which Dunn states was most likely a "deliberate echo of the most famous of the scripture's potter passages (Jer. 18:1-11) [and] would be an invitation to his Roman readers to recognize that the divine purpose could be tempered and changed, that the pot made for a disreputable use could be remade into a work to be treasured."(10) Here is the potter passage in Jeremiah:

Then the word of the Lord came to me. He said, “Can I not do with you, Israel, as this potter does?” declares the Lord. “Like clay in the hand of the potter, so are you in my hand, Israel.

Robert Chisholm comments on this passage: "there is no room for fatalistic determination here, for the 'clay' is depicted as exercising its own will, prompting an appropriate response from the divine 'potter.'"(11) The potter responds to the clay and adapts to its movements. Paul and his readers definitely would have thought of this passage in response to the use of the potter and clay metaphor--something that was most likely intentional on Paul's part.


Romans 9:21: Has the potter no right over the clay, to make out of the same lump one object (σκεῦος) for honorable (τιμὴν) use and another for dishonorable (ἀτιμίαν) use?

II Timothy 2:20: In a large house there are utensils (σκεύη) not only of gold and silver but also of wood and clay, some for honorable (τιμὴν) use, some for dishonorable (ἀτιμίαν).

These two verses are virtually making the same point: there are vessels made for honorable use and others made for dishonorable use. But Paul continues in II Timothy to say this:


2:21: All who cleanse themselves of the things I have mentioned will become honorable (τιμήν) utensils (σκεῦος), dedicated and useful to the owner of the house, ready for every good work.

If we apply the understanding of the Jeremiah passage and the II Timothy passage to Romans 9--which we have no reason not to do--all notions of double predestination disappear entirely. It becomes clear that vessels of wrath are not that way because of some divine decree, but because of their own actions.

In fact, Paul writes so that the vessels of wrath will not stay fit for destruction! He says just a few verses later, "Brothers and sisters, my heart’s desire and prayer to God for the Israelites is that they may be saved" (10:1).

So here is the overall flow of Paul's message to the Israelites:

1) The covenant people were not chosen because of anything that they did (vv.11-12, 16), but their call to election was solely based on God's mercy and compassion (vv.15-16).

2) The roles that Esau and Pharaoh played in the salvation-history of Israel are now being filled by Israel herself in the coming of the gospel to the Gentiles. God chose Jacob over Esau and used Pharaoh's obstinate state to further his purposes for Israel, and now he is choosing the gospel over obstinate Israel and is using Israel's obstinate state to further his purposes for the world, "in order that he might make known the wealth of his glory on vessels of mercy which he prepared beforehand for glory" (v.23). God prepared beforehand the gospel and that it would be presented "not only [to] the Jews but also [to] the Gentiles" (v.24; see also vv.25-26).

3) Paul emphasizes that God retains the right to do all of this, because he is the Creator, the Potter (v.18-21). However, it does not have to stay that way. At the beginning of chapter 10, Paul says his purpose is for Israel to be saved. If the vessels of wrath alter their behavior and embrace the will of God, they can be vessels of mercy.

It has been made clear that Romans 9 is not at all referring to predestination or individual salvation. Nothing in the text provides it. When you read the chapter with the understanding of its intended purpose for its intended audience, all notions of Calvin's doctrines fade away. I encourage you to read chapters 9-11 with this understanding and see how well the pieces fit together.
________________