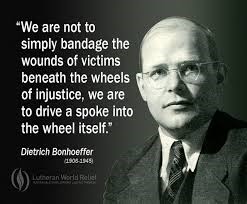 I have seen this meme on Facebook more than once. It is one of Bonhoeffer’s more frequently quoted statements. Here at Union Theological Seminary, it is a popular sentiment, used to refer to the need for revolutionary social change.

Following Reggie Williams’ narrative of Bonhoeffer as an academic-theologian-turned-black-theologian due to his stay at Abyssinian Baptist Church in Harlem, Bonhoeffer is often portrayed as a social justice hero.[1] He was a radical theologian of Christian resistance, a precursor to liberation theology, a revolutionary who advocated fighting for justice by any means necessary—and that is why he was imprisoned and later executed.

The "spoke in the wheel" metaphor is a powerful one, almost immediately evoking images of revolution for resistance-minded folks. And yet, it is almost never contextualized, Bonhoeffer’s meaning by it is almost never considered, and instead its meaning is almost always assumed. When its actual meaning is sought after, the result is…well, rather boring, compared to the implications usually associated with the phrase.

For Bonhoeffer, generally speaking, the church is “not encouraged to get involved directly in specific political actions of the state … neither to praise nor to censure the laws of the state.”[2]

We need to let that set in, because Bonhoeffer's thought is already more boring and less radical than that of liberationists (like myself).

According to Bonhoeffer, the state’s purpose is to preserve a godless world for Christ by establishing order through the law and the sword. This a thoroughly Lutheran understanding of the two kingdom. Church: preaches the gospel. State: preserves the world through law and order so the world can hear the gospel.[3]

It is possible, however, for the state to institute “too little law and order or too much law and order.”  He explains, “There is too little law and order wherever a group of people is deprived of its rights,” and there is too much when the state develops “its use of force to such a degree as to rob the Christian faith of its right to proclaim its message.”[4] When a group of people is being deprived of its rights, or when the state is endangering the church’s ability to preach the gospel, the church’s responsibility concerning politics changes.

However, when he talks about groups deprived of their rights, he didn't think in the same way we tend to. He said, it is “extraordinarily difficult to distinguish actual deprivation of rights from a formally permitted minimum of rights.”[5] So, it is not that, any time you see a group deprived of rights, that constitutes a situation pastors have to speak out about. It has to be clear that it is a systemic issue, and that it is done "without any scruples."[6]

However, Bonhoeffer distinguishes between “the responsibility of the pastoral office” of the church, and “the responsibility of [individual] Christians.”[7] Individual Christians can be more actively political than pastors. On the pastoral, church level, Bonhoeffer states that while the church should not infringe on the state’s territory by taking direct political action, “it can and must … keep asking the government whether its actions can be justified as legitimate state actions, that is, actions that create law and order, not lack of rights and disorder.”[8]

This is the first possibility for church political action: pastors publicly calling the state's decisions into question, when they seem to imply too much or too little law and order.

The second possibility for church political action is “service to the victims of the state’s actions,” because the church “has an unconditional obligation toward the victims of any societal order.”[9] The church, Bonhoeffer says, has to take a “view from below, from the perspective of the outcast, the suspects, the maltreated, the powerless, the oppressed, the reviled—in short, from the perspective of those who suffer,” and this view necessarily has practical implications.[10]

I would call this treatment of the symptoms and not of the system! But I am a revolutionary, and Bonhoeffer wasn't interested in revolution.

The final possibility of church political action is the most serious for Bonhoeffer, and it is here where we get the spoke in the wheel analogy. “The third possibility,” he says, “is not just to bind up the wounds of the victims beneath the wheel but to seize the wheel itself.”[11] This is the possibility of “direct political action,” and it is only possible if “the state, without any scruples, has created either too much or too little law and order,” so much so that it threatens “the existence of the state and thus [the church’s] own existence as well.”[12]

What would this actually look like? The answer: A public confession of the church established by an evangelical council.[13]

This might seem like a child opening up a Christmas present only to find socks moment, but for Bonhoeffer it is a big deal. This is when the church boldly and intentionally infringes on the state’s territory and tells it what to do. It is the church’s concrete commandment to the world, and takes the form in a definitive No to the state’s actions.

Bonhoeffer thinks this should be rare because the church does not specialize in governance and so does not always know best how to establish law and order. Only an extreme situation could demand direct political action, and only a group committed to the truth of the gospel can together justifiably determine if the situation demands such a response.

Bonhoeffer’s own example of this was “the obligatory exclusion of baptized Jews from our Christian congregations or a ban on missions to the Jews.”[14] Such state actions infringe on the church’s business and endanger the church’s proclamation of the gospel, and so must be resisted definitively. This is too much law and order.

The church cannot be subject to the same whimsicalness and low standard of accuracy that political commentators are subject to. He says, “with every word [the church] speaks it is putting its entire authority at stake.”[15]

A revolutionary, Bonhoeffer most certainly was not. While we find in Bonhoeffer’s work a robust and systematic theological approach to the topic of resistance, it does not look like what liberationists (again, like me) would like it to.

He did not base his political thought on a theology of God's identification with the lowly and oppressed. He was not turned into a black liberation theologian after his time in Harlem. Nor did his time in Harlem "transform" his thinking and make him capable of resisting Hitler. His political thinking was thoroughly Lutheran, and already established before Harlem.

When he returned from New York to join the resistance, he did so with the framework that he had already adopted as a Lutheran, with his own understanding of its implications for his time.

Take Bonhoeffer's political thought or leave it. Agree with it, or argue with it. But don't simply conform it to your own. Those like Eric Metaxas, Stanley Hauerwas, and Reggie Williams have all done this in different ways. Bonhoeffer is widely misunderstood on this point. Everyone want to claim the theologian that resisted Hitler for themselves. But ultimately if we are appropriating someone's work, we should care about what that person cared about, and try to understand that person on his own terms.