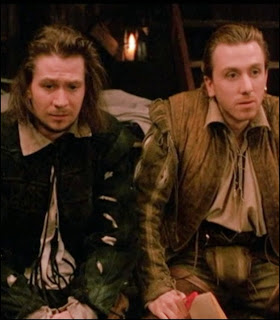 I'm not much of a Shakespeare person, so when my friend Charity brought the movie Rosencrantz & Guildenstern are Dead over, I wasn't super excited to watch it. I figured, it has good actors in it, so I may enjoy it some. To say I was pleasantly surprised is an understatement. The movie is not only enjoyable and funny, but intellectually stimulating and philosophically brilliant.

The plot is complicated, but suffice it to say that it revolves around Rosencrantz and Guildenstern, who are supporting characters in Shakespeare's play Hamlet. In the movie, they are the main characters, but their plight is that they are becoming aware of their roles as supporting characters. As supporting characters, they are not the concern of the grand scheme of things, nor do they know what the grand scheme is. They only pick up little bits from their engagements with their surroundings and when their parts of the play actually occur. One humorous example is when they hear talk of how Hamlet has "changed" and "transformed." They repeatedly quote this information later on in the story, but they do not know why it was said in the first place, let alone if it is actually true.

They eventually come to realize their insignificance. One of the ways this happens is through their reflection on death, of which Rosencrantz (?) says, "Out we come, bloodied and squalling, with the knowledge that for all the points of the compass, there's only one direction. And time is its only measure." Because we're not in control of our fate, we are insignificant. We are powerless. As Guildenstern (?) says before he dies, "There must have been a moment at the beginning, where we could have said no. Somehow we missed it." He says this because he knows his death was not something he chose, but was orchestrated for him.

The other characters know they are insignificant. The other characters are also privy to the grand scheme (or at least to a good deal more of it than Rosencrantz and Guildenstern). The insignificant supporting characters are left to play their part, up until their unfortunate end. The sad caveat is that they have the same kind of conscious experience as the main characters--the same reason, emotions, etc.--and so they engage their fate with curiosity and try to figure out the meaning of their existence and confront their inevitable death while being too insignificant to be granted any of the answers.

What is brilliant about all of this is that Rosencrantz and Guildenstern seem to represent humanity as whole, their plight representing that of humanity's. We too curiously engage the meaning of life and try to confront our inevitable death. We wonder what the grand scheme is, and what our part is in it. We despair when we realize we are too insignificant to be made privy to the grand scheme. We don't get to know the mystery of reality. We don't have access to absolute truth.

This is the same thing Job learns in the biblical book. At the beginning of the story, we are made aware of the reality: Job is a pawn in a wager between God and the satan. The story then narrows in on Job, who does not know what is going on. His experience leads him to confront the mystery of God. He demands to know the answers to his questions, the reasons for his suffering, the meaning behind his experience. How does God respond? By showing him how insignificant he is. There are things going on that are way beyond Job, of which Job has no knowledge, and his role does not come with ultimate knowledge. Job doesn't have security clearance for that level of information. He is denied access. What is left for Job is to accept his role and make of it what he can.

In my next blog, I want to engage this idea further. I'll lay out why I think it shows that believing in something beyond creates what Hegel called "the alienated soul," or, "the unhappy consciousness." I will then advocate an alternative.

Until then, I hope you enjoy chewing on these ideas as much as I have.
Posted by John Daniel Holloway at 3:11 PM

Email ThisBlogThis!Share to TwitterShare to FacebookShare to Pinterest
Labels: god, hamlet, hegel, job, rosencrantz and guildenstern are dead, the meaning of life