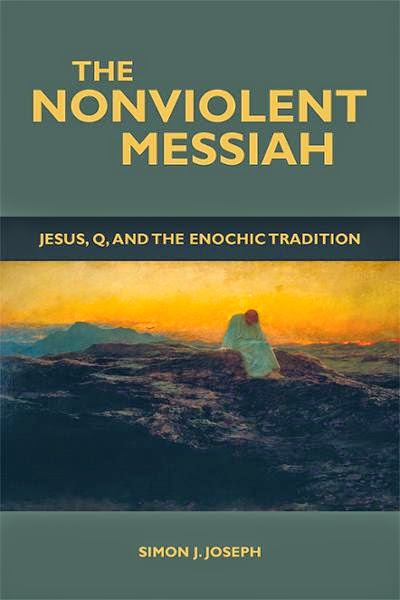 In The Nonviolent Messiah, Simon Joseph makes the case that the nonviolent teaching of Jesus is authentic and should be used as a criterion for determining inauthentic Jesus traditions. His book is a fabulous resource for New Testament/Historical Jesus studies, providing huge chunks of footnotes on each page and 83 pages of bibliography!

In Part 1, Joseph provides a helpful introduction to Jesus and Q studies, including a dialogue with the criteria for authenticity. Following this discussion is a chapter on Jesus' nonviolence, which stands as an exceptional overview of the arguments.

The next chapter deals with divine violence in the Hebrew Bible. His contribution is surface-level as he responds to the different approaches to OT divine violence in typical fashion. He concludes the chapter saying we cannot simply contrast the God of the OT with Jesus, for to do so "undermines the fact that Jesus was Jewish. The historical Jesus' critiques of Jewish individuals, traditions, and institutions were complex Jewish critiques within Judaism."(1) However, he contradicts himself later. He says in chapter 10: "The historical Jesus directly challenges the Jewish biblical tradition of war and violence. Q 6:27-35 introduces a vision of God as loving toward all, undermining traditions in which God is violent and vengeful toward his chosen 'enemies.'"(2) I absolutely agree, but he just told me in chapter 3 that to take this approach would be "not only simplistic and potentially supersessonistic" but also ignorant of Jesus' Judaism!(3)

The final chapter chapter of the section discusses the eschatalogical teaching of Jesus. Joseph finds a contradiction between Jesus' inclusivism/theology of God's love for all and the apocalyptic warnings of judgment and separation. However, I did not find in his treatment an engagement with exactly how this is a contradiction. He merely presents both strands of teaching and expects the reader to see them as contradictory. It seems to be assumed that Jesus' inclusivism and theology of God's love for all necessitates universalism, so that any kind of end times judgment is incompatible. I find this to be flawed. Joseph would do well to engage theological works on eschatalogical judgment, particularly those dealing with free will.

Part 2, on Christology, is quite informative and intriguing. Joseph convincingly shows that Jesus was understood as a messianic new Adam who was pre-existent, and that the New Testament draws significantly from the Enochic material. Compelling and informative though it is, it is difficult to determine exactly how all of it is relevant to the discussion of Jesus as a Nonviolent Messiah. Even the final conclusion of the book seems to lack a central focus, as it begins talking about Jesus' nonviolence and then veers off into how Jesus was understood in the first century.

The final section of Joseph's book wraps up the preceding sections while offering more insights. He contrasts the exclusive Son of God title for Jesus and the inclusive message that following Jesus will result in becoming children of God. The authentic Jesus, Joseph posits, taught that those who love their enemies become children of God--"a radical universal Jewish vision within first-century Palestinian Judaism."(4) Any conflicting portrayals of Jesus should be deemed inauthentic (although, he says this without really explaining why the nonviolent Jesus is historically preferable).(5)

All things considered, The Nonviolent Messiah is a fantastic resource for students or scholars of NT/Historical Jesus studies, not just for the ideas offered, but also for the tons of sources cited. Its technical nature, along with its challenging suggestions, makes it a work which would not appeal to a wide audience. That said, I recommend it to all who are interested.

While insightful from cover to cover, in the end Joseph is, in my opinion, just too sure of his conclusions. Assurance is a luxury I doubt historical Jesus scholars can actually have. Furthermore, he falls prey to either-or thinking, lacking nuance and a respect for the possibility of both-and truth. He wants a consistent Jesus, but as Thomas Merton wondered, "Is reality the same as consistency?" He added: "A god who is fitted into our world scheme in order to make it serious and consistent is not God."(6) Jesus has proven to be the same way. When those around him thought they could figure him out, box him in, systematize him, predict him--he always surprised them. Maybe Jesus was the most subversive person who ever lived, and we can't make him consistent because he will always strike at our concepts of him and our truth claims.