Inciting the Wrath of God: Divine Hardening and Human Depravity 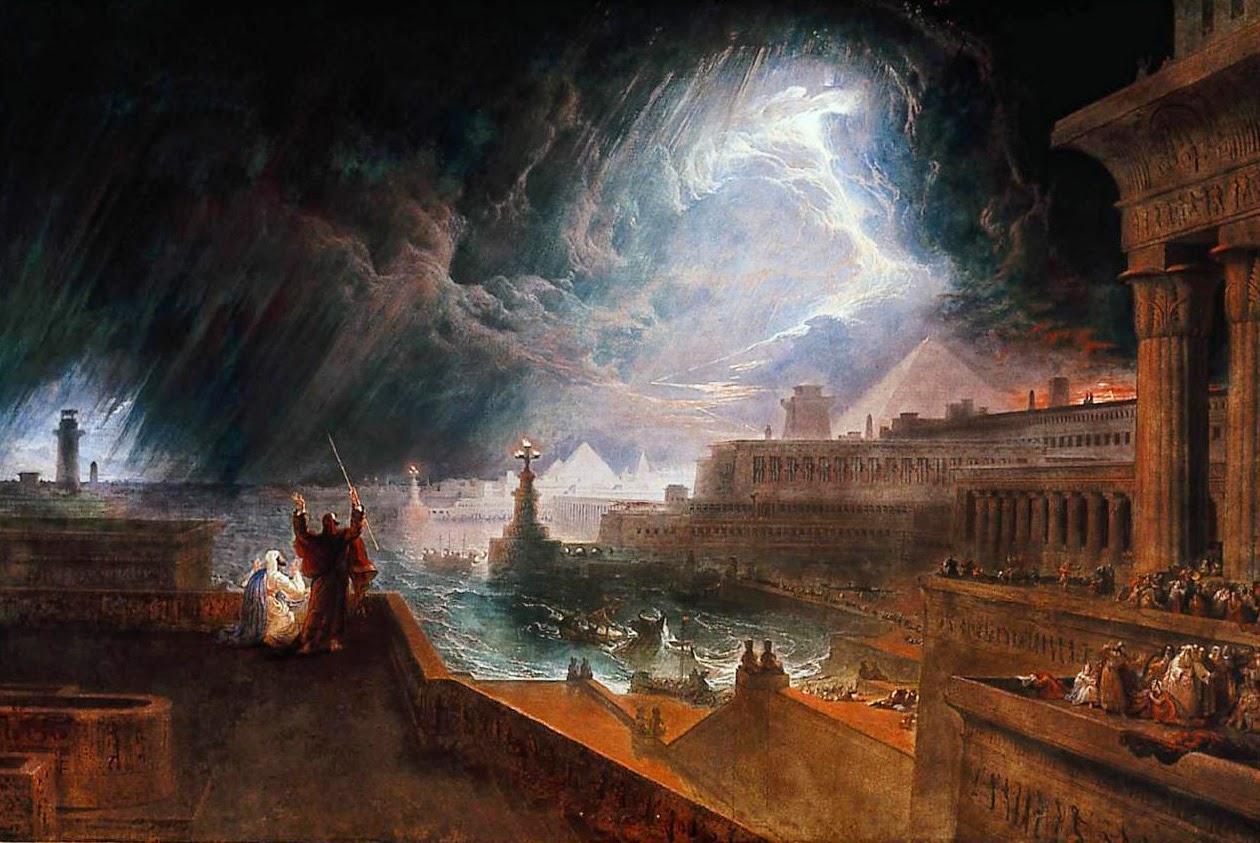 "But my people did not listen to my voice,
And Israel did not obey me.
So I gave them over to the stubbornness of their hearts,
To walk in their own devices."
- Psalm 81:12

In my post "Bane and Hell: Tortured with Hope" I examined these passages in regards to the doctrine of Hell. Here, I am going to examine them in an explanation of what happens when God hardens hearts.

Perhaps the most disturbing verse on this topic can be found in Romans 9: "So then, God has mercy on whomever he wills, and he hardens whomever he wills" (v.18). This verse is used by many to support double predestination and God's absolute control over humans. John Piper, for example, says God "decides who will rebel in their hardness of unbelief and therefore deservingly be condemned." He adds that God "does not base his decision whom to harden on anything a person does." In other words, God arbitrarily picks people and hardens them--this hardening makes it impossible for one to choose to obey God and forces one to live an evil life. But don't think that this makes God responsible for one's evil, because "people who are hardened against God are really guilty. They have real fault. They are really blameworthy. They really deserve to be judged. And God decided who would be in that condition." You think this an absurdity? Piper isn't surprised, because you are thinking with a "natural, fallen human mind" and "the opinions of man don’t count for much."(1) Thus, it is simply a mystery.
If what Piper is saying was true, I do not think I could be a Christian. This kind of god is not praiseworthy, in any whatsoever.

So let me offer a different explanation.
I contend that God's hardening is his appropriate response to a person's (or a people's) depraved sinful state. In hardening, I believe God removes himself from their hearts; he severs his influence on their minds.

Plenty of biblical scholars and theologians share a similar view. Joseph Fitzmyer states that “The ‘hardening of the heart’ by God is a protological way of expressing divine reaction to persistent human obstinacy against him, a sealing of a situation arising, not from God, but from a creature that rejects divine invitation."(2) Likewise, Abraham Joshua Heschel contends that God's wrath "is never a spontaneous outburst, but a reaction occasioned by the conduct of man."(3) Indeed, Morgan Guyton suggests that "God's οργή [wrath] is the proliferation of sin itself."(4)

God's hardening looks exactly like the passages quoted at the top. People refuse to listen to God's voice; they disobey him; they become stubborn; they become fools; they replace God with earthly things; they lust in impurity and fill themselves with degrading passions. So then, God gives them over to a depraved mind. He withdraws his influence from them. Gregory Boyd says that "the essence of God’s 'wrath' against sin is simply allowing evil to run its self-destructive course."(5)

"How abysmal stubbornness can be," Heschel observes, "Man rears his own despots--idols, lies, perversions; he labors to prepare his own disaster. Is he insane?"(6) Sins themselves are steps to absolute depravity. Such was the nature of the fall: "one small step for man, one giant leap for mankind" (if you will).

Humanity was created in God's image; though the fall corrupted humanity, it did not destroy the Spirit of God inside them. From the beginning, God's grace has been the ever-present hand extended towards humanity, constantly pleading that they grab hold of it and be reconciled back to his image. But there comes a point (which you may call 'the point of no return') when people cross a line. In Isaiah 65 God laments, "I have held out my hands to an obstinate people, who walk in ways that are not good, pursuing their own imaginations--a people who continually provoke me to my very face . . . who say, 'Keep to yourself, do not come near me" (vv.2-3, 5). This is the point where God pulls back his hands.

It is almost as if sin becomes one's exhortation to God to harden his heart. Indeed, in all of the times God is recorded to have hardened someone's heart, he was hardening a heart that was already, if not mostly, hard. Heschel says,


It seems that the only cure for willful hardness is to make it absolute. Half-callousness, paired with obstinate conceit, seeks no cure. When hardness is complete, it becomes despair, the end of conceit. Out of despair, out of total inability to believe, prayer bursts forth. . . . Where signs and words from without fail, despair within may succeed.(7)

A perfect example of this is found in the most famous (or infamous) occurrence of divine hardening. That is, the hardening of Pharoah. 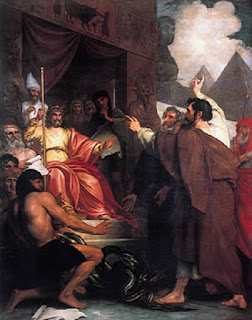 Later, there is one instance that says, "When Pharaoh saw that the rain and hail and thunder had stopped, he sinned again: He and his officials hardened their hearts. So Pharaoh's heart was hard and he would not let the Israelites go, just as the LORD had spoken through Moses" (9:34-35, emphasis mine). This verse is most likely referring to 4:21 and 7:3-4. Yet, in the fulfillment of these verses, Pharoah hardens his own heart! Thus, when God says "I will harden Pharoah's heart," rather than telling Moses that he will override Pharaoh's free will and force him into a state of depraved stubbornness, he is predicting(8) the inevitable based on his knowledge of Pharaoh's sinful state.

Indeed, in the next seven occurrences after God's prediction, Pharoah hardens his own heart (Ex. 7:14, 22; 8:15, 19, 32; 9:7, 34-35). After these, there are four verses in which God hardens his heart (Ex. 9:12; 10:20, 27; 14:8). So then, when God hardened Pharoah's heart, he was merely giving Pharoah over to the depraved mind he was already seeking. He was making Pharoah's willful hardness absolute by withdrawing from his heart. He was letting Pharoah's sin take its self-destructive course.

It should also be noted that this "divine hardening did not override Pharoah's decision-making powers."(9) After all, Pharoah did end up letting the people go. But what is interesting is the response of Pharoah's servants after being hardened. They hardened their hearts (9:34), and consequently God hardened their hearts (10:1); however, they responded by begging Pharoah to change his mind: "How long will this man be a snare to us? Let the people go, so that they may worship the LORD their God. Do you not yet realize that Egypt is ruined?" (10:7). It seems that Heschel was right: the despair within them from their absolute hardness of heart caused them to surrender.

God is not an arbitrary puppet-master that forces half of his puppets into a hell-bound state of hardness. He is a God of love, never giving up in his mission to reconcile humanity back to himself. He seeks man's heart in every way that he possibly can. But there comes a point when man rejects him so much that God gives him what he wants. Man says "Keep to yourself! Do not come near me!" and God responds, "As you wish." In that state, he can either see his utter need for God, or he can reject the Holy Spirit. This, I believe, is why rejection of the Holy Spirit is the only unforgivable sin. Because the Holy Spirit is the embodiment of God's mission to reconcile humanity back to him. The Holy Spirit is within man and all around him, forever trying to influence him. When man fully rejects the Holy Spirit and his work, there is no more that can be done, for he has cast out his only hope. He has smacked God's hand away and has given an adamant 'No!' to the offer of grace. This is unforgivable because man will not go back after this. He will not seek forgiveness or receive it.


"How abysmal stubbornness can be. Man rears his own despots--idols, lies, perversions;
he labors to prepare his own disaster. Is he insane?"

But how does this understanding of hardening fit with Romans 9:18? Well, the context is the key to this verse, so you should check out my blog on Romans 9. But without reading another couple thousand words, when you consider what it means for God to harden someone's heart, and what the meaning of God's wrath truly is, the verse is no longer intimidating. That is, God's hardening does not mean he is making someone evil, but rather that he is withdrawing from the person's heart and his withdrawal causes the heart to harden. Furthermore, God only does this when the person is rejecting his will or resisting his Spirit (cf. Luk. 7:30; Acts 7:51). Thus, Paul here is merely stating that God retains the right to harden people if he so chooses. He is not at all advocating for an arbitrary God who hardens people regardless of what they have done, as Piper suggests.

To conclude, it must also be remembered that God's wrath is never what God wants. "God's heart is not of stone," says Heschel, "God does not delight in unleashing anger," but rather, his wrath is executed in order "to bring about repentance; its purpose and consummation is its own disappearance."(10) In Ezekiel 22, God says "I looked for a man among them who would build up the wall and stand before me in the gap on behalf of the land so I would not have to destroy it, but I found none. So I will pour out my wrath on them . . ." (vv.30-31). Throughout the Old Testament there are people who plead to God not to unleash his wrath upon his people. And many, many times God changed his mind. This is because God is not one who loves and desires to unleash his wrath. God is one who suffers when he has to use it. He is one who is always looking for a reason to show mercy, as he was in Ezekiel 22. Yes, God can harden whomever he chooses, he can withdraw his influence from whomever he chooses, but he only chooses to if he absolutely must. And I contend that it is never because he desires to, and it is never something he enjoys. Furthermore, Heschel has added that "Judgment, far from being absolute, is conditional. A change in man's conduct brings about a change in God's judgment. No word is God's final word."(11) God's love endures forever! Thus, love is going to be the victor. God is long-suffering as he wrestles with humanity; and his patience is due to his confidence that he will win the hearts of his creations. No word is God's final word when his purpose is the reconciliation of all of his poiéma (Eph. 2:10).