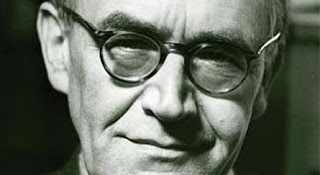 Early in his career, Neo-Orthodox theologian Karl Barth became a pastor of a small town in Switzerland. During his ten years as a pastor, he realized that the liberal theology with which he had come to associate himself became worthless:


An entire world of theological exegesis, ethics, dogmatics, and preaching, which up to that point I had accepted as basically credible, was thereby shaken to the foundations, and with it everything which flowed at the time from the pens of German theologians.(1)

His liberal theology could not contribute to his pastoral work. However, he discovered the glorious inspiration and power that lies in Scripture and he found that it was what he needed.(2)
Barth saw the Bible as a fallible witness characterized by humanness. However, he treated it like it was the inerrant Word of God. Because, even if it is a mere witness susceptible to error, he did recognize that it is the source of knowledge about God's activity and Jesus Christ. He also believed that it becomes the divinely inspired Word of God when God uses it to communicate Himself to the reader.(3)
Furthermore, Barth was not interested in finding the historical details of Scripture and he rejected trying to prove God's existence. To him, "The Bible is. Revelation happens. . . . [The Bible's] inspiration lies in God's use of it as a special instrument and witness."(4) Thus, the Bible's real divine significance lies in the subjective experience of God's self-communication to the reader. (This is similar to how John Calvin viewed Scripture. He believed that the "Word of God is a dynamic experience that occurs when Spirit and Scripture interact."(5))
At the end of his career, Barth was asked to summarize briefly his entire life's work. "In the words of a song my mother taught me when I was a child," he said, "'Jesus loves me, this I know, for the Bible tells me so.'"(6)

Another theologian to reject the infallibility of the Bible was Rudolf Bultmann. He believed that the Bible is full of myths. Not myths as we think of them but rather "the ways in which a culture symbolizes and objectivizes its entire world view."(7) Bultmann's conception of myths does not "deny the possibility of a knowledge of truth that is genuine and permanently valid. Rather, mythical utterance in this sense would always be essentially involved in this sort of knowledge, being simply another way of expressing the analogical character of such knowledge."(8) In Scripture, they are symbolic, dramatic images contributing to its message.
With this, Bultmann believed that "theological exegesis can not operate from a detached neutral viewpoint,"(9) but rather, the Bible should be "interpreted in terms of what God says about human existence through the mythological accounts."(10) This hermeneutic is called "demythologization." It is the process “of interpreting the NT in existential terms, that is, of laying bare its kerygma in such a way that it shall immediately strike home to the man of today.”(11) To Bultmann, the Bible's kerygma captures the individual. Again, the focus is a subjective experience of the Bible's message.

What can we learn from this?

We Christians can get so caught up in apologetics that we lose sight of the real power of Scripture. Especially since we are in the third quest for the historical Jesus, the Bible has become something we feel we have to defend.

I am not a biblical studies student because I want to prove that the Bible is legitimate; I am a biblical studies student because I want to grow in an understanding of God and his message to humanity.
There are many things we cannot know about the Bible. Biblical scholars for many years have revealed this. But that's okay. We don't need to know. It is not the importance of knowing that the Bible teaches, it teaches the importance of faith. And faith, Abraham Joshua Heschel says, "is derived from our perceptiveness to the word that has gone out to all of us."(12) Faith can be got from the Bible: "It is the Bible that enables us to know the Bible."(13)

"There are no proofs," says Heschel, "Proofs cannot open the gates of mystery for all men to behold. The only thing we can do is open the gates for our own soul for God to behold us."(14) God's presence is in the Bible, but we "cannot sense His presence in the Bible except by being responsive to it."(15)
Instead of defending the integrity of the Bible, try just saying "read it." As Bultmann believed, inside the Bible lies a power that can capture the soul. As Barth believed, the Bible does have difficulties (and anyone in biblical studies knows this), but the essence of the Bible is not in its authenticity as a book full of objective, universal truth claims that explain life, but rather in its authenticity as the source of God's Word. God's Word doesn't need proofs. "Must the sun be labeled with a mark of identification in order to be acknowledged?"(16) The Bible is God-breathed and inspired in that, when one opens his heart and reads it, he is captured by the miraculous power of God's message.