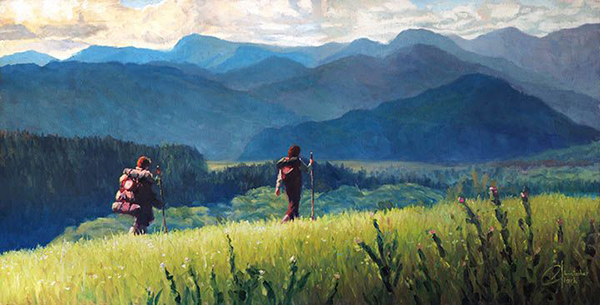 I really like when our Psalm says that we are on “the pilgrim’s way.”

I have often felt like a pilgrim in my life. My family moved a lot when I was growing up. I spent most of my childhood in the greater Seattle, Washington area, but we also lived in California for a while, and later we moved to Florida, to the opposite corner of the country. In the earliest memories I have, we are poor and living in a humble space; in others, we are fairly wealthy and living in a large house.

At 17, I moved to Virginia Beach and start school at Regent University. From there, I moved to Richmond, Virginia, where I married my wife Debbie. And now we live in Brooklyn, where I have earned my Master of Divinity.

I have not experienced life in terms of having a base to always go back to and cultivate. I have not been a part of any local long term projects that last a lifetime. I have not built relationships with store owners or local leaders or cashiers or waiters and waitresses in my area—the kind of thing that tends to naturally happen when you have a lasting home.

For me, life has been a series of different periods. The California period, the Seattle period, the Florida period, etc. I go from place to place, encountering various trials, overcoming various obstacles, meeting new challenges along the way.

And sometimes it even seems like life is hardship after hardship, one thing after another. With my family I have encountered bankruptcy, abortion, divorce, mental illness, depression, anxiety, disillusionment, and the list goes on.

Don Draper in the show Mad Men says, “What is happiness? It’s a moment before you need more happiness!” For isn’t life just a series of hardships, a tiresome journey through struggle after struggle?

It often feels like that. In addition to our own personal trials, we encounter those in the public sphere. For example, while the institution of slavery that restricted black lives to servitude and exploitation was abolished 150 years ago, black people have never been without intense struggle in the United States. After slavery, it was Jim Crow. And they thought they had defeated that with the Civil Rights movement, only to encounter another form of Jim Crow in the war on drugs and the beginning of mass incarceration, so that now we can truly speak of a “New Jim Crow” era.

W. E. B. Du Bois wrote, “The slave went free; stood a moment in the sun; then moved back again toward slavery.”

For Paul in our Ephesians does not urge us to conjure up a solution to the evils of the world ourselves—we are not left to reinvent the wheel; rather, he tells us that we are to embrace what has already been established and provided for us: “be strong in the Lord and in the strength of his power” (v.10).

We are not to create our own armor, but rather, “put on the armor of God” (v.11, 13). We do not have to provide any of the pieces ourselves. We do not provide truth, nor do we provide the gospel of peace, nor salvation, nor the Spirit, nor the word of God. It all comes from God. They are all gifts of God, eternally established and made sure by God. Through God’s gifts and provisions, we come to meet “the strength of God’s power,” instead of being left to depend on our own strength and fend for ourselves.

And because these gifts of truth, and the Holy Spirit, and the word of God, and the good news of our salvation, have been eternally established and made sure by God, the outcome of our journey is predetermined. Victory is assured us by God.

So we do not encounter various hardships with only a slight hope of making it out okay. We do not strive to maintain a fighting chance against the forces of evil, nor is it up to us to keep the flame of hope alive. On the contrary, we are “fighting from a position of victory,” as one biblical commentator put it. “Happy are those whose strength is in [the Lord]!” as our Psalm says (84:4).

We do not put on our own armor, with which we are left to hope against hope that it is enough to survive all the slings and arrows encountered on a dreary, woe-laden pilgrimage. Instead, we “put on” the armor of God’s victory.

Paul says in Romans 13: “Salvation is nearer to us now than when we became believers; the night is far gone, the day is near. Let us then lay aside the works of darkness and put on the armor of light. … Put on the Lord Jesus Christ, and make no provision for the flesh, to gratify its desires” (vv.11–14).

Earlier in Ephesians, he said: “You were taught to put away your former way of life, your old self, corrupt and deluded by its lusts, and to be renewed in the spirit of your minds, and to clothe yourselves with the new self, created according to the likeness of God in true righteousness and holiness” (4:22–24).

The message is: Everything has already been done, the victory has already been accomplished. Now, just receive what God has given, and you will be empowered to overcome the evil in your midst. Put away the old, and embrace the new thing God has done.

So in the present, God is asking us if we will maintain the corrupt, old reality, or if we will “put on” the new reality of God.

For even in putting on the new reality of God, we have to withstand the persistence of the old reality, for many suppose that the old way is more beneficial to them. It is not in their best interest, they think, to embrace resurrection and new life. It might compromise their power and their authority.

God’s new reality is the forgiving of all debts, the releasing of all prisoners, the freeing of all slaves, the liberation of all the oppressed. It is the gospel of peace, not of war, or oppression, or exploitation. It is the end of all tyranny. We are not surprised, then, that the rulers and authorities of this present darkness are not too keen on it.

So evil persists. The slave goes free, only to be swept back into oppression. Slavery is abolished, only to be followed up by Jim Crow, which is overcome, only to be followed by mass incarceration. A racist system continually finds new ways of painting black people as criminals, and then subjects them to brutality, imprisonment, and exploitation. The old maintains its grip on reality.

And so, as Paul incites us, we have to resolutely stand against evil. In Galatians 5, he says, “For freedom Christ has set us free; stand firm therefore, and do not submit again to a yoke of slavery” (5:1). Just as many persist in embracing the old reality, we have all the more to persist in standing firm, clothed with God’s new reality, equipped with the armor of God’s truth, God’s Word, God’s gospel, God’s salvation, so that we will resist and overcome dogged evil.

But how do we do that? How do we wage war against evil? How do we properly stand against the rulers and authorities? Which policy should we adopt? Which legislation should we support? What organizations do we join? What practical steps do we take?

Even with the light of the gospel, we see as if in a mirror dimly. God’s ways are not our ways, nor God’s thoughts our thoughts. We do not always know how exactly we should resist evil, nor do we always know how to overcome hardship. We cannot hope to win the war ourselves. But, as I said at the beginning, we are not asked to. Victory is and has already been achieved by God.

So what are we asked to do? Here in Ephesians, we are asked to pray. Pray “at all times,” Paul says (v.18). “Keep alert and always persevere in supplication” (v.18). “Pray without ceasing,” as he says in I Thessalonians 5:17.

Now, let me be clear, prayer is not all we have to do. We are not supposed to simply pray for the world while passively waiting for God to come in at the last day and solve everything, nor are we simply bearing life on earth, waiting for heaven.

But, Paul shows us that it is through prayer that we take up the armor of God. We resist evil first through a position of prayer. As Karl Barth says, “To clasp the hands in prayer is the beginning of an uprising against the disorder of the world.”

Elsewhere, he asks, “Can serious prayer, in the long run, continue without the corresponding work? Can we ask God for something which we are not at the same moment determined and prepared to bring about, so far as it lies within the bounds of our possibility?”

If the Christian, he says, really prays “as he can and should as a Christian, he will not let his hands fall and simply wait in idleness for what God will finally do, neglecting his witness to Christ. On the contrary, strengthened and encouraged by the thought of what God will finally do, he will take up his ministry on this side of the frontier.”

For though we may be without tangible weapons of obvious power and ability, we have prayer, and when we pray, we put on the armor of God. We put on the belt of truth, the breastplate of righteousness, the gospel of peace, the shield of faith. We are given the sword of the Spirit, the word of God, and therein lies the assurance of victory.

We are on the pilgrim’s way. We venture forth, through difficult terrain, standing up against a mountain of evil, not quite sure if we will make it through. But happy are those whose strength is in the Lord, whose trust is in the Lord.

So I encourage you to fill your lives with prayer. Ask God what you should do. Tell God what it is you need. Lift up to God the concerns of those in need. Thank God for what he has given you. Praise God for the victory we have in Christ.

Prayer will not “solve” everything for us. But when we pray we open ourselves up to God, and God loves to fill our lives with good things.

Prayer is not a work that we do in order to be good Christians, nor is it a formula for getting God to do something we want, nor is it like putting a dollar in a vending machine and expecting a gift. When we pray, we ready ourselves for God, we direct ourselves toward God’s kingdom, we seek God’s justice and righteousness. And Jesus says, seek first the kingdom of God and his righteousness, and everything you need will be given to you (Matt. 6:33).

In other words: pray, and you will find your way.

With that, I want to close with the words from the song “May It Be,” by Enya, which comes at the end of the first Lord of the Rings movie, a movie about a long and difficult journey to claim victory for good in a land plagued with evil:


May it be an evening star
Shines down upon you
May it be when darkness falls
Your heart will be true
You walk a lonely road
Oh! How far you are from home


In the name of the Father, the Son, and the Holy Spirit. Amen.