A Little Bit of Marxist Theory: Rosa Luxemburg against Lenin 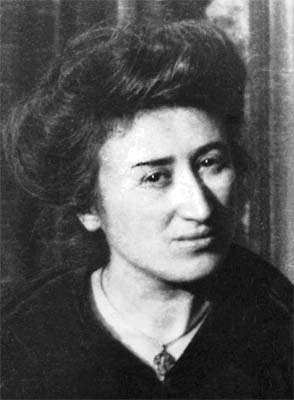 A particular concern of my recent posts on Marxist theory has come from the Lenin-Kautsky view that “socialist consciousness is something introduced into the proletarian class struggle from without (von Aussen Hineingetragenes), and not something that arose within it spontaneously.”[1] That concern remained as we discussed the work of Rosa Luxemburg, who early on in her career distinguished herself from Lenin on this point.

Already in 1904 she saw in Lenin an “ultracentralist tendency.”[2] Lenin, she says, separates the “unorganized” revolutionary activity of the class-conscious proletariat from the discipline of a decisive central authority.[3] The social democratic movement would thus be based “either on blind obedience or on the mechanical submission of the part’s militants to their central authority.”[4]

Luxemburg countered that the social democratic movement is based “on the organization and the independent direct action of the mass,” or it is nothing at all.[5] “The most important and profitable changes of the last decade,” she says, “were not ‘invented’ [—“from without”—] by any of the movement’s leaders … but were in every case the spontaneous product of the unfettered movement.”[6] On the next page, she adds, “they are the consequence of a continuing series of great creative acts of experimental, often of spontaneous, class struggle.”[7]

This is in direct opposition to Lenin, who resisted the conception of revolutionary consciousness as the spontaneous product of the proletariat. Lenin’s problem, according to Luxembrug, is that he claims too much authority for intellectuals like himself, does not trust the mass with revolution, and consequently tends toward an ultracentralism which is “imbued, not with a positive creative spirit, but with the sterile spirit of the night-watchman state …, with narrowing and not with broadening, with tying the movement up and not with drawing it together.”[8] This betrays the very heart of the social democratic movement, which consists of the spirit of mass organization.

This concern is reflected in her pamphlet written two years later on the mass strike. The 1905 Russian Revolution, she says, shows us that “the mass strike is not artificially ‘made,’ not ‘decided’ at random, not ‘propagated,’”—that is, not made, decided, or propagated by bourgeois intellectuals![9]

Instead, she says the mass strike consists of “a multiplicity of the most varied forms of action,” taking place within a long, drawn-out class struggle.[10] It is “not a crafty method discovered by subtle reasoning for the purpose of making the proletarian struggle more effective, but the method of motion of the proletarian mass.”[11] It does not happen in a vacuum but is an event which explodes from a history of struggle. “The various undercurrents of the social process of the revolution,” she says, “cross one another, check one another, and increase the internal contradictions of the revolution, but in the end accelerate and thereby render still more violent its eruptions.”[12]

Here, Luxemburg is akin to Gramsci, who stated that the development of revolutionary consciousness is a dialectical negotiation “between the intellectuals and the masses.”[13] It is “a ‘philosophical’ event,”[14] which comes out of “a long process, with actions and reactions, coming together and drifting apart, and the growth of very numerous and complex new formations.”[15]

The point is that the mass of workers is not in need of revolutionary parents who tell them what to do in order to be liberated, who set out a blueprint for a future revolution that they must abide by in order to become free. Revolutionary impulses arise out of class struggle. Revolutionary consciousness is not a gift given from above by economic scientists, but develops out of an historical dialectic of forces.

There is an undeniable element of spontaneity in all revolutionary outbursts, precisely because, as Luxemburg says, “revolutions do not allow anyone to play the schoolmaster with them.”[16]

This conception guided Luxemburg’s assessment of the Russian revolution in 1918. She attributed the Bolshevik success to the fact that all the power rested “exclusively in the hands of the worker and peasant masses,” which “feed the revolution from a narrow blind-alley and opened up for it an untrammeled path into the free and open fields.”[17]

She further thought that power should continue to be held exclusively by the proletarian mass, and was angered by the actions of Lenin and Trotsky following the revolution, as they disassembled the Constituent Assembly which would have been made up of workers.[18] They came out against democracy as such, and so, in her words, stopped up “the very living source from which alone can come the correction of all the innate shortcomings of social institutions. That source is the active untrammeled, energetic political life of the broadest masses of the people.”[19] Her indictment of Trotsky and Lenin is quite powerful, and worth quoting at length:

“We have never been idol worshippers of formal democracy.” All that that really means is: We have always distinguished the social kernel from the political form of bourgeois democracy; we have always revealed the hard kernel of social inequality and lack of freedom hidden under the sweet shell of formal equality and freedom—not in order to reject the latter but to spur the working class into not being satisfied with the shell, but rather, by conquering political power, to create a socialist democracy to replace bourgeois democracy—not to eliminate democracy altogether.

But socialist democracy is not something which begins only in the promised land after the foundations of socialist economy are created; it does not come as some sort of Christmas present for the worthy people who, in the interim, have loyally supported a handful of social dictators. Socialist democracy begins simultaneously with the beginnings of the destruction of class rule and of the construction of socialism. It begins at the very moment of the seizure of power by the socialist party. It is the same thing as the dictatorship of the proletariat.

Yes, dictatorship! But this dictatorship consists in the manner of applying democracy, not in its elimination, in energetic, resolute attacks upon the well-entrenched rights and economic relationships of bourgeois society, without which a socialist transformation cannot be accomplished. But this dictatorship must be the work of the class and not of a little leading minority in the name of the class—that is, it must be under their direct influence, subjected to the control of complete public activity; it must arise out of the growing political training of the mass of the people.[20]

By taking exclusive political power away from the mass of workers and placing into the hands of a central authority, Lenin and Trotsky eliminated an essential element of social democracy. Did they not open the door for the authoritarianism of Stalin?

Lenin himself saw this toward the end of his life, and urged that Stalin be deposed and the Central Committee made up of workers and peasants. But the damage was already done. One wonders if Stalin’s dictatorship would have been avoided had Luxemburg’s democratic vision been realized instead of the Lenin-Trotsky centralism.