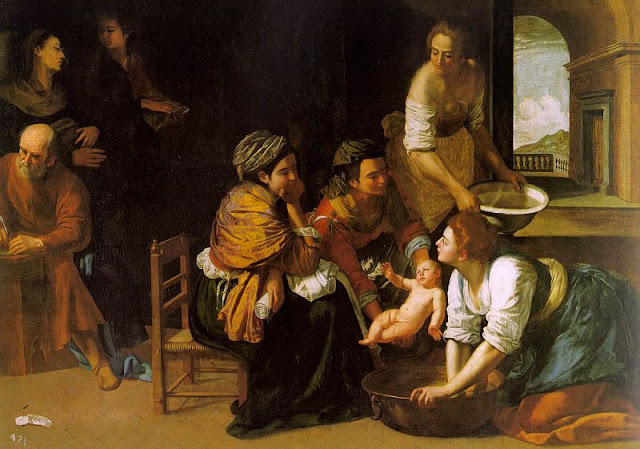 At St. Lydia's we are in the middle of Advent.

The word Advent means “coming” or “arrival.” In this season, we celebrate the coming of Jesus, the birth of God into the world.

It is a time to reflect on what it means to inhabit an in-between space, the already-not-yet, wherein we celebrate the Incarnation, but also wait with eager expectation for Christ’s return.


Now the time came for Elizabeth to give birth, and she bore a son. Her neighbors and relatives heard that the Lord had shown his great mercy to her, and they rejoiced with her.

On the eighth day they came to circumcise the child, and they were going to name him Zechariah after his father. But his mother said, “No; he is to be called John.” They said to her, “None of your relatives has this name.” Then they began motioning to his father to find out what name he wanted to give him. He asked for a writing tablet and wrote, “His name is John.” And all of them were amazed. Immediately his mouth was opened and his tongue freed, and he began to speak, praising God. Fear came over all their neighbors, and all these things were talked about throughout the entire hill country of Judea. All who heard them pondered them and said, “What then will this child become?” For, indeed, the hand of the Lord was with him.

When we open our Bibles to the Gospel of Luke, we know what we are going to find—the story of Jesus. As soon as we start reading, we anticipate the arrival of the Messiah. We know how the story ends.

But Zachariah and Elizabeth are far from that story. The thought that the Messiah is coming has probably not even entered their minds yet. They are living in the day-to-day realities of Jewish life in the shadow of Rome, in the days of King Herod.

This was only about 30-40 years after Rome had taken control of Judea. It is likely that Zechariah and Elizabeth were alive during Judea’s independence, and for the fall to Rome. The collective memory of an independent Judean kingdom would have been quite fresh, and the people of Judea would have still been mourning…and dreading.

Life had become a wilderness, an ocean of barren, uninhabitable land, where few things grow, where praiseworthy things like rain and the color green are scarce.

It was a seemingly hopeless setting.

So what did the people think when these strange events in the life of Zechariah and Elizabeth began to occur?

Zechariah comes out of the temple speechless. They don’t know that he had been met by an angel and a prophecy. They only encounter his silence.

He remains silent for 9 months. In that time, Elizabeth, despite everything, becomes pregnant. After the child is born, at his circumcision, when they defy tradition and name him John, Zechariah recovers his voice.

What are the people to make of all this?

Dinner tables throughout Judea were filled with speculation.

There is no announcement of hope. Not yet. There is only hope-filled longing.

But just as unexpected events can hint at hope, there can also be events which rather crush and devastate.

My sister had two miscarriages.

Both pregnancies were met with excitement and wonder.

I’m sure we all know how exciting a pregnancy can be.

There is so much hope and so much joy surrounding the thought of the coming child.

What is this child going to be like? What joy and wonder will this child bring?

For with every birth, we celebrate newness. New life. New possibility.

But these two pregnancies were short-lived. And both were devastating.
Hopes were crushed, and the road up ahead darkened.

A similar feeling, I think, was felt by many of us when Donald Trump was elected president.
It seemed like everywhere I went that week, there was a collective sinking of spirit.
Dread ruled the day.

Now we are living in the reality of that event, and many of us are nervous about what the future holds.
It is filled with uncertainty, and even danger.

And so we fear.

This is the predicament of every believer: How do we have faith when the future is uncertain and dangerous, and when the present promises coming disaster?

How do we have faith amid the wilderness, where we can see for miles all around us, but nothing green, and no clouds.

As we contemplate the coming of Jesus, Christians long for that coming.
In this time that remains, we feel deeply the absence of the coming one, and are haunted by his memory.

There is no announcement of hope. Only hope-filled longing.

But then there is John.
The text says he is a voice calling from the wilderness,
“Prepare the way of the Lord.”

“Let every heart prepare him room,” as we sing during Christmastime.

Along these lines, Paul in II Corinthians 8 speaks of readiness, diligence, and expectation.

He incites the Corinthians to develop a “readiness of the will,” or as one commentator puts it, a “willingness to be willing.”

Readiness is a predisposition toward an event, wherein we pre-decide how to respond.
In this case, it is a predisposition toward the coming kingdom of God, toward justice, toward abundant life,
When rulers will be brought down from their thrones, and the lowly will be lifted up,
When the hungry will be nourished, and the rich will be denied,
When the enslaved will be freed, and their oppressors punished,
When those who mourn will be comforted, and those in luxury will know want.
For wherever these things occur, there the kingdom has come.

We ready ourselves for the kingdom by remaining dedicated to its possibility, by living in the promise, and remaining loyal to it, not letting our responsibility waver, so that when it comes, we intuitively respond as God would have us respond.

We see this in Elizabeth.

In old age, she has to bring a child into the world, into that world, the world of subjection to Rome…the wilderness.

But from the text we have no reason to believe that she was anything but faithful to God.
We see this throughout chapter one, where, despite not being visited by an angel, she seems to understand what is going on better than anyone.

How does she know to call the child John?

There is no indication that Zechariah imparted to her what happened in the temple, and we should hesitate to reach beyond the text and assume that Zechariah wrote it down for her earlier.

Without any such indication, it seems likely that we are to assume her choice was inspired.

Elizabeth had faith. She had that willingness to be willing. She was predisposed to the coming of God in such a way that she lived her life actively anticipating it.

And so when God came, she responded as was needed.

This is how faith functions for Luther. It is a disposition, a state of being which organically entails a manner of living.

The way of faith is the way of loving and hoping in the things of God so that they are reflected in our being in the world.

Elizabeth embodied this faith, and that is what it means to prepare the way of the Lord, where hope-filled longing becomes embodied hope.

We do not know.

It could be a disaster.

We are like the people gathered around Zachariah outside the temple, like the neighbors witnessing the naming of John.

We ourselves have not been given direct divine communication. We did not see or hear the angel. We were not told to name the child John.

We have only the testimony of strange events, and the strange testimony of Christ’s coming, of a promise of new life, of a New Creation,
of the kingdom of God.

But she lived in the promise, ready and willing,

preparing the way of the Lord.