My Interview with Douglas Meeks: A Christian Approach to Globalization 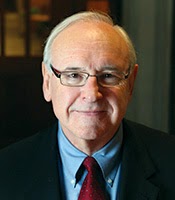 About a week and a half ago, I had the wonderful opportunity to interview M. Douglas Meeks, professor at Vanderbilt Divinity School and author of God the Economist: The Doctrine of God and Political Economy (see my review of his book, here). I am working on a paper called, "Global Economics and Good News for the Poor: The Holy Spirit's Work in an Age of Globalization," for the 2015 Society of Pentecostal Studies conference. It was for this paper that I was interviewing Dr. Meeks. My purpose was to engage him on the what a Christian understanding of globalization would look like.

First, a little about globalization. Essentially, globalization is the worldwide institution of international trade, so that businesses in different countries are more and more doing business with countries all over the world. It has also meant a growing worldwide embrace of capitalism, as more countries are engaging in competition and collaboration with other capitalist countries.

It has the potential to make everyone better off, and such people as Thomas Friedman proclaimed quite enthusiastically the opportunity for all of the world to benefit from globalization while it was still an up and coming phenomenon.(1) Today, it dominates discussions of political economy. One cannot talk economics or economic reform without taking globalization into account. As someone who is passionate about economic issues, and one who wants to be well-informed and well-trained in political economy, I of course had to start educating myself on the issues of global economics. I am happy to say I learned a lot from my interview with Douglas Meeks.

The Five Dimensions of Globalization

Dr. Meeks listed for me five dimensions of globalization: 1) Economic; 2) Cultural; 3) Political; 4) Spiritual; and 5) Physical. Whether or not this list is comprehensive, it helped guide the discussion.

In the economic dimension, Meeks suggested that reform in the areas of trade agreements, debt relief, and tax codes are not only necessary for globalization to work, but are also imperative for Christian proclamation.

Within trade agreements, work should be done to ensure that agreements benefit all the parties involved. What often happens is that trade agreements benefit privileged, developed countries more than their developing counterparts. A possible solution, he says, would include the development of "third parties that validate that the trading partners are actually making the trade they say they are and that they have the money entailed in the trade. Ways must be found to assure that risk is equitably shared."(2) Furthermore, proper trade reform would critique an emphasis on comparative advantage--or, to use Joseph Stiglitz's categories, focusing more on fair trade rather than free trade.(3)

On debt reform, Meeks suggests that we need to open up serious discussions about debt forgiveness, as many developing countries are overburdened by crushing debt that heavily restricts their prosperity.(4)

Finally, on tax reform, Meeks says policies should be put in place which favor the poor and underprivileged over against the rich, instead of the other way around, which is what our current system is doing. He recommends Thomas Piketty's Capital in the Twenty-First Century for good, well-informed suggestions regarding tax codes.(5)

On the cultural plane, Meeks says an embrace of shared humanity and human dignity needs to be cultivated. It is in this arena where the church could do much but is currently found wanting. He says churches need a renewed emphasis on sanctification. Included in this would be an awareness of and concern for neighbors, over against dehumanization and the avoidance of others. It must also entail a critique of our consumerist, individualist social world.

The middle class, he says, must identify with the poor and commit to caring for their needs. This will necessarily include sacrificing our own autonomous money management and our self-interested consumerism.

Regarding politics, Meeks says we need a commitment to "intense democratization," and by that he means "a radical criticism of privilege," so that everyone has representation, and an actual equal playing field is established. We need a commitment to meeting the needs of everyone in the community, instead of coping with a society of self-interest where everyone is only looking out for themselves.

An area in which culture and politics intersect is with the importance of localization. To stop globalization from being a system of oppression, we need an emphasis on local production, local consumption, and local decision-making. It is easy to dehumanize those far away. We can put out of mind those child slaves who are out of sight, the ones making our commodities. If we want to stimulate economic growth and help the underprivileged, we will support local farms and markets, and small businesses. Supporting local efforts over against major national and international franchises that seek to establish market domination all over the country and even the world--even at the cost of the well-being of others--will help assist the little guy who wants to be successful in an age of international enterprise.

It would be easier and often cheaper for me to shop at Walmart, to buy a wallet off of Amazon, to get books from Barnes & Noble, to get coffee at Starbucks, Heineken beer, and a burger at McDonald's. It does more for my local Richmond community to shop at the farmer's market or Ellwood Thompson's,(6) to buy a wallet from my friend Peter,(7) books from Chop Suey,(8) coffee from my friend Jeff's Kokayi Coffee (or go to a local place like Crossroads Coffee),(9) beer from Virginia breweries,(10) and a burger from places like Burger Bach or Cary Town Burger & Fries.(11)

In the spiritual dimension of globalization, Dr. Meeks says the church needs to preach hope. All is not lost. The world is not passed help. We can do something; we can alleviate poverty; we can fight corruption; we can narrow the wealth gap; we can provide for people's needs. Hopelessness and apathy are plaguing the American church, and because of globalization it has worldwide consequences.

Meeks says globalization is not altogether negative, that it opens up the possibility of international neighborliness and hope for a peaceful coexistence among nations--but such a possibility takes work and commitment.

Finally, with the physical dimension, Dr. Meeks suggests that we need to be healing the sick and providing health care for those who need it. Turning the sick and the needy into profit centers is an abomination. Christians should be advocates for the sick and needy, and that means pushing for their needs to be met without being demanded what they cannot afford.

We also need, according to Meeks, a lesson in good stewardship of creation, taking better care of the environment instead of working against it like we currently are.

Overall, a Christian approach to globalization would seek to ensure that all those in need are provided for, that no one is left vulnerable and oppressed, and that people are not dominating and exploiting others. A Christian approach to globalization would favor the poor, the underprivileged, and the sick, and would give voice to the voiceless, the unrepresented. Ultimately, Dr. Meeks shows us that an economic philosophy regarding globalization cannot be Christian if it does not put the needs of the vulnerable at the forefront of concern.