Truth Amid 7 Billion Protagonists: The Reality of Pluralism and the Impossibility of Certainty 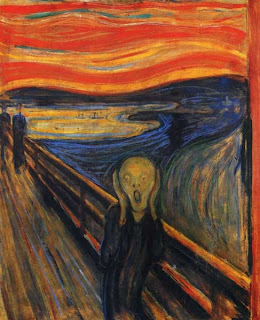 I don't remember how old I was, but I know I was really young when I had the realization that I am not the only protagonist in this world. It was mind-boggling for me to realize that people experience life in the same subjective way that I do, except with different thoughts and feelings. I am the protagonist of my story, and other people are supporting characters and extras in that story. Likewise, you, reader, are the protagonist of your story, and I am a character in that story. It's like in 30 Rock when Tracy Jordan says, "When I go to sleep, nothing happens in the world." I realized the utter falsity of this statement. This realization was quite daunting for me. I found out, quite literally, that the world does not revolve around me (the picture to the left captures my reaction to this realization)

This would, much later, lead me to discovering the realty of pluralism. At a young age, perhaps younger than I was when I realized I am not the only protagonist in the world, I had a thought that made me feel quite cool: "I am smarter than Albert Einstein, because I know that Jesus Christ is my Lord and Savior." It was a hard day for my faith when I realized that this isn't true either. Mormons think they have the universal truth, and that I need to be converted to their way of thinking. Atheists think they know the truth, and I need to come to their conclusions. There are 7 billion protagonists in this world, and they all, in one way or another, have a claim to truth, and all our claims differ in a multitude of ways. I could be wrong, and someone else could be right.

I'm not smarter than Einstein simply because I believe Jesus is my savior. Einstein was a pretty smart dude. Richard Dawkins is a smart guy. He's not dumb. He believes he's right, and I believe I'm right; and, as is said in Fiddler on the Roof, "He's right, and he's right? They can't both be right."

I don't know how many people have had both of these realizations. I have just assumed that everyone has, but I have found that to be mistaken. One guy I know didn't have the first realization until he was in college! For me, it was a part of growing up; I just woke up to it one day. I don't know if it's the same way with everyone, but I'm beginning to think it just isn't.

My point in saying all this is to introduce a discussion on faith and certainty. Sometimes, a conversation arises in which I share with people the fact that I fear death. Most of the Christians I say this to get confused: "But you're going to Heaven. Why are you afraid to die?" To which I say, "Well, yah, I believe I am going to Heaven. But I don't know 100% that I am going to Heaven. We Christians could be wrong." This almost always confuses them even more. They often take it as a weakness in my faith, because faith is so often held as synonymous with certainty. The International Standard Version of the Bible translates Hebrews 11:1 as saying, "faith is the assurance that what we hope for will come about and the certainty that what we cannot see exists." This is a poor translation, and most translations rightfully do not translate elenchos as 'certainty'.

Certainty is a feeling and cannot actually exist. When it comes to what is objectively true, we can't be 100% certain, which is why faith is necessary. This is very postmodern of me, but it's true. I believe Christianity is true, but I could be wrong. Atheists could be right. Because there are those possibilities, neither of us can claim to be certain about what the truth is. We can feel certain, and often do, but that doesn't make what we believe objectively true.

In science, theories, laws, and facts are all considered subject to the possibility of falsification. We simply cannot be certain of even the most basic facts. We can't even prove that reality exists beyond our minds. The simple fact that there are other creatures that see more colors than we do should tell us that we can't be 100% certain about what we perceive to be true. Thus, faith is absolutely essential, it is the starting point of every ideology. To quote Einstein (who was much smarter than I), "There is no logical path leading to [universal] laws [from which a picture of the world can be obtained]. They are only to be reached by intuition, based upon something like an intellectual love."(1) Lesslie Newbigin equates this 'intellectual love' with faith.(2)

I should clarify that I am not advocating strict pluralism or relativism, which maintains that truth is completely relative and whatever we believe is true determines what actually is true ("He's right and he's right? They can't both be right"). There is no true-for-you vs. true-for-me; objective truth exists, but, as 1 Cor. 13:12 says, we see things as in a mirror dimly, only knowing in part, but some day we shall know fully, seeing face to face. This verse should cause us to abandon all claims to certainty, but rather, humbly claim the truth of Christianity through faith.

I think it is about time the church recognizes the reality of pluralism, and instead of demanding that Christians adhere to certainty, and frowning upon all forms of doubt, we should humbly acknowledge our inability to know anything, and instead display with reason that the Gospel is preferable within the limited framework that we have for understanding our world.(3) All good thinkers will acknowledge that we can’t be certain of anything but simply have to do the best with what we have; Christians should do the same. As Paul Tillich said, we should "act as if it [is] possibly the case that [our] beliefs [are] false."(4)

Notes:
(1) Albert Einstein, quoted in Lesslie Newbigin, The Gospel in a Pluralist Society (Grand Rapids: William B. Eerdmans, 1989), 31.
(2) Ibid.
(3) On the subject of faith vs. certainty and doubt as a tool for Christian thinking, see Gregory A. Boyd, The Benefit of the Doubt: Breaking the Idol of Certainty (Grand Rapids: Baker Books, 2013).
(4) Paul Tillich, quoted in Newbigin, 42.
Posted by John Daniel Holloway at 1:21 PM