The End of America as We Know It? 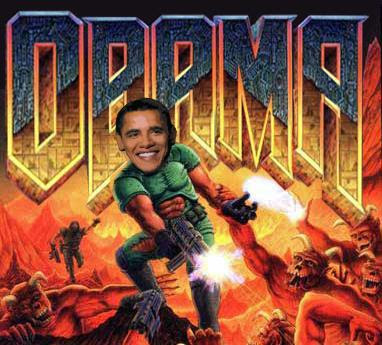 Obama's presidency is not the end of America as we know it.
In four years two other candidates will run for president just like all the other elections.
Sure, we'll see changes; perhaps even drastic changes. But Obama can only do so much; he can't take from us Jesus Christ.
Side note: Obama is not against religious liberty. If you're believing that, then you should probably do some re-evaluating.
But even if he was, would there be reason to fear? I suppose by the world's standards there would be; but we Christians do no live by the world's standards, do we?
We are citizens of another kingdom; followers of a different leader.
This government is not our hope. Romney was not America's hope. And America is not the world's hope.
Christ is the one and only hope for all of humanity, and he isn't bound to a president.
Don't spend your time fretting and complaining. Your God is bigger than Obama!
Don't spend your time predicting the doom of America. You have no idea what God can accomplish!
Don't spend your time ranting and raving. Would Christ?
Would Christ fear, complain, rant and rave about who is president?
What would he do?
What did he do?
His work was in the transforming of the world from the inside out, not from the outside in.
The world tries to change things from the outside in. Romney would have tried to, and Obama is going to try to. But that's not the way Christ does things.
He is in the business of transforming people with his powerful love.
Instead of fearing and weeping about who is president, you should, as Ghandi said, be the change you want to see in this world!
Instead of jumping to extremes like "I'm moving to Australia," go out and make a difference with the love of Christ!
Instead of complaining, pray for Obama. Don't pray in anger. Don't pray selfishly. But pray that he would see God and that God would become an influence in his decision-making. Is it not possible?!
Pray that God will invade the White House, and that all those who would listen to him will, and will be empowered to make a difference, not for the Republican party, but for God's will.
Pray for this country. Pray that God will make you a tool for the beautiful transformation he desires in America.
Pray for your attitude toward the president and toward the country. Pray that you will be the salt of the earth, the light of the world; that you would not lose your flavor nor hide your light under a basket, but that you would enrich the world and give light to all who see you; that by witnessing your good works they would glorify the Father in Heaven.
Pray that you would be a glimpse of Christ to all who see you. Pray that God would transform you into the kind of American that he wants you to be.
And TRUST GOD.
If everything the extreme conservatives are saying is true, would that mean that God is no longer sovereign?
Can God not take care of you?
I'm almost glad that Obama was re-elected. This will give Christians another chance to fully trust God and focus more on him than on the government.

Remember in these days to trust God, be the salt and light of the world, be like Christ, be transformed, and pray for Obama and for the country.

"Share in suffering as a good soldier of Christ Jesus. No soldier gets entangled in civilian pursuits, since his aim is to please the one who enlisted him." - II Timothy 2:3-4

"our citizenship is in heaven" - Philippians 3:20

"Everyone must submit himself to the governing authorities . . . Give everyone what you owe him: If you owe taxes, pay taxes; if revenue, then revenue; if respect, then respect; if honor, then honor. Let no debt remain outstanding, except the continuing debt to love one another, for he who loves his fellowman has fulfilled the law. . . . clothe yourselves with the Lord Jesus Christ, and do not think about how to gratify the desires of the sinful nature." - Romans 13:1, 7-8, 14