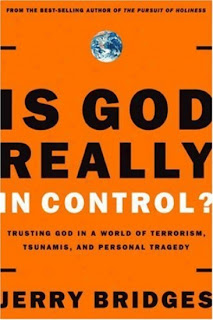 My last review was of Greg Boyd's book Is God to Blame? Beyond Pat Answers to the Problem of Suffering. This book--asking what amounts to the same question--provides perfect examples of the "pat answers" Boyd talks about. I purposefully read these books together because 1) they are asking the same question, and 2) they are on completely opposite sides of the spectrum. Greg Boyd is an open theist and Jerry Bridges is a Calvinist.
I bought this book to use as a source for my book against Calvinism. I found everything I expected. Bridges attempts to answer the problem of evil and suffering by saying that God is in control and is ultimately working out everything for good.
As far as Scripture is concerned, he does provide a considerable amount of verses that support his views. Unfortunately, these verses are taken out of context and merely at face value and are used in a way that the authors could not have meant when studied properly. (Ironically, most of the verses he refers to are discussed by Boyd in a chapter in Is God to Blame? entitled "Providence and Control.")
This book is full of contradictions and absurdities. His response to the problem of evil just raises more questions that he cannot answer reasonably.
For example, he affirms that all things are caused by God. He even provides a list of examples, including: "Did another driver go through a red light, strike your car, and send you to the hospital with multiple fractures?" He states at the end of the list that "All of these circumstances are under the controlling hand of our sovereign God, who is working them out in our lives for our good." Yet, later, he states that "A driver can cause an auto accident and, in his own mind, evade his carelessness by attributing the accident to the sovereignty of God. Obviously . . . [this attitude is] unbiblical and foolish." This is a logical fallacy.
God causes driver A to go through a red light, hit a car, and send driver B to the hospital, but driver A can't attribute his accident to God's sovereignty? This is an obvious contradiction.
At a couple points, he scratches the surface of reason. At one point he says, “Granted we live in a sin-cursed world, and all [catastrophes in life] could simply be attributed to the sinfulness of mankind. But if we accept that God is sovereign . . . then we must conclude that God is in control of even these terrible circumstances and is guiding them with His infinite wisdom to their appointed purpose.” Yes, the evil and suffering in life can simply be attributed to the sin-cursedness of the world. Why is it that the cause of evil and suffering is either God or the devil? It seems like it should be quite clear what comes from God and what comes from Satan--but it isn't so clear with Calvinists like Bridges.
At another point, he states that "Such a concept of God’s sovereignty appears to destroy the free will of humans and make them mere puppets on God’s stage," and further states that we must use the Bible as our source, and the Bible--he believes--provides that God is in control of all things. He then supports this point with Bible verses. He makes no attempt, however, to refute his own claim that this destroys the free will of humans and makes them mere puppets on God’s stage. So, then, in his own words, we are mere puppets on God's stage.
I will conclude with a quote from Greg Boyd: “We create impossible problems for ourselves . . . when we go beyond what Scripture teaches.” This book creates so many impossible problems with its pat answers, contradictions, and absurdities. I do not recommend this book to anyone searching for a good answer to the problem of suffering or to anyone seeking to know more about God.
Posted by John Daniel Holloway at 12:44 PM

Email ThisBlogThis!Share to TwitterShare to FacebookShare to Pinterest
Labels: book review, calvinism, Greg Boyd, Is God Really in Control?, Is God to Blame?, Jerry Bridges, the problem of suffering